For those users experiencing performance issues due to CPU spikes, could you please capture which service/tab/website are causing the issues using the browsers Task Manager? You can find this information by going to: 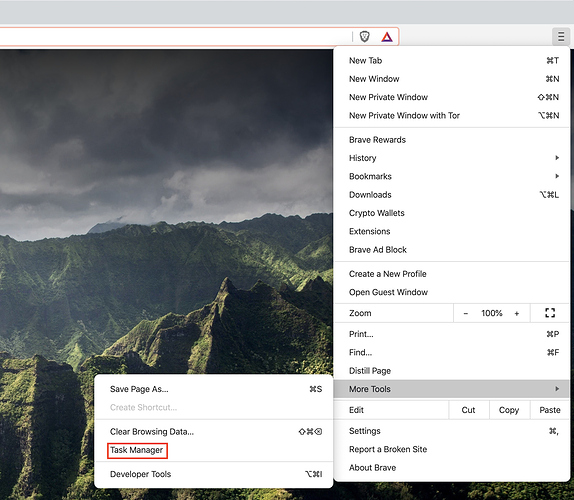 Once you have the Task Manager opened, you can sort via CPU column and see which tab/process keeps spiking/causing high CPU usage.

Please provide as much information as possible regarding your CPU usage issue, your OS and Brave version you’re using. You can find your Brave version by:

Method 1: Type in brave://version in the URL
Method 2 : Hamburger Menu --> About Brave (or open brave://settings/help in the URL)

Issue can be further tracked here on our Github: https://github.com/brave/brave-browser/issues/8779

The most common tabs that cause problems are Telegram, multicoincharts.com, Slack, Gmail…basically whatever is open. They’re usually between 80-120% (I dunno how it’s above 100). Right now my CPU is spiking for a tab that’s not active.

It’s literally any tab. I can have gmail only open and it will spike like crazy. Then after hours of being online it will randomly go away and then come back a few minutes later. I like your browser but the entire reason I switched from chrome was to avoid wrecking my pc from this high cpu usage. Not to mention how annoying it is listening to the fan trying to cool my computer down constantly. I had 3 tabs open last night and got temperature warnings for my cpu temp at 91-94 degrees numerous times. Going to lose a lot of users if you guys don’t figure this out asap.

@LED @presence35 (and anyone else),
To reiterate, its extremely helpful if we can see the actual process, in the browser task manager, that is taking up all the resources.

If anyone reporting can take a screenshot of the process that is spiking in the browser task manager, it would go a long way to helping us narrow down and resolve the issue.
Instructions on how to do this are in the initial post. 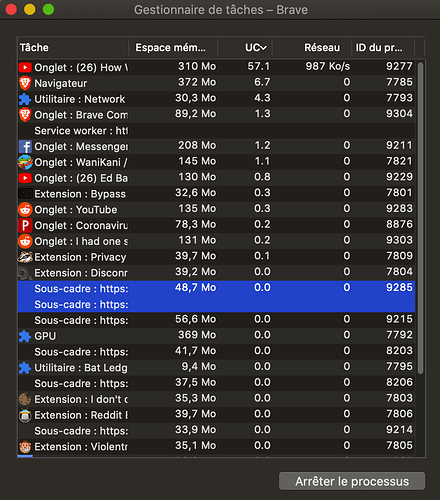 As always, it’s youtube that takes up all the processing power, although I have seen a more intensive use of the CPU by Brave for some time. I have seen it go up to 110% of the CPU as I posted on reddit (u/katurha)
Another reddit user suggested that it’s the youtube API that spams ads to the Brave Shields, so I tested using only adblock plus and it’s the same. I tried on Safari, and it’s the exact same thing. Without the adblock, both run as usual. So all in all, I’m guessing it’s not coming from you guys.
It’s been like 2 weeks like that, and made so worse by the beginning of the fucking quarantine. 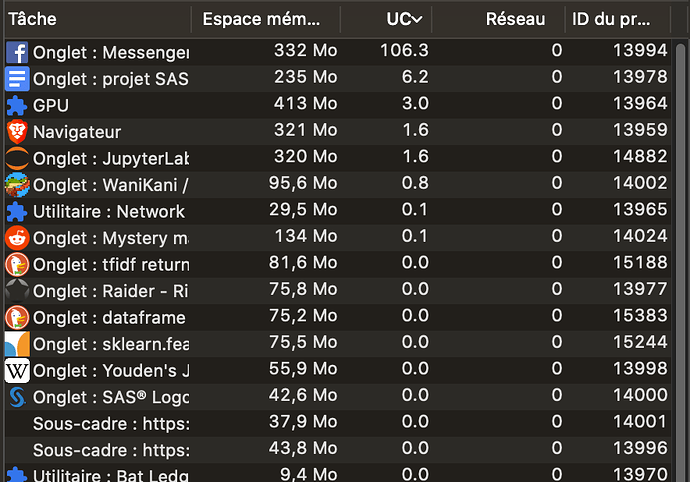 I have a decent pc, so I didn’t notice the irregularity until I looked in task manager, but whatever the brave process is that’s abnormally demanding, it’s PID (I’m assuming “port ID”?) is 4104. 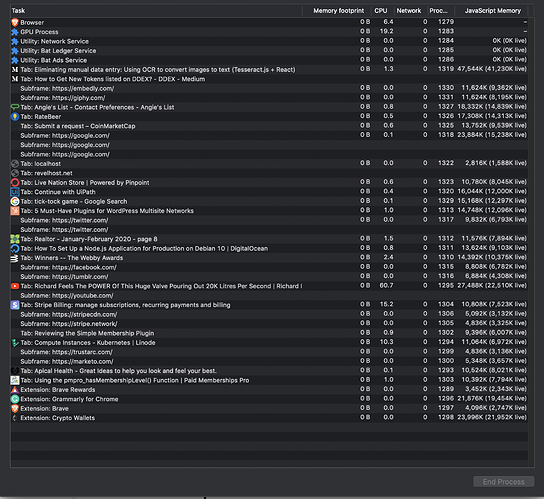 This is with Telegram tab as focus (CPU spiking) 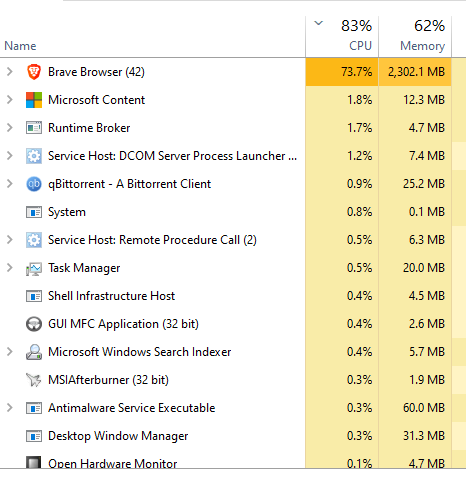 This is with New Tab focus (CPU fine)

But even with all windows focused on a New Tab it will still spike up occassionally.

For me, the real problem is the CPU time that’s taken up - by Gmail specifically. Messages is bad too but I had no idea until I left Gmail open overnight and checked task manager this morning. 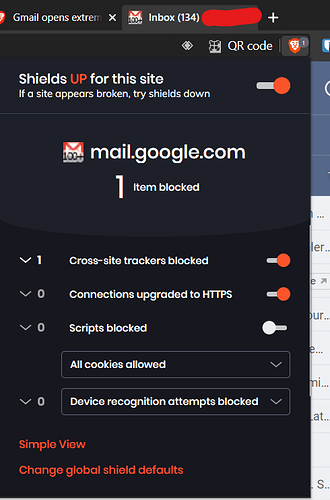 Actually looking at it now, blocking all Device Recognition could have something to do with it, I forgot I set that… maybe the service worker keeps trying to do so and getting caught in a loop?
Also, I had to allow all cookies or else gmail would give me a persistent authentication error across the top of the screen.

I do have a decently large amount of emails though if that helps (34,618 to be exact) - but I think they’re all still less than like 1GB altogether, plus that’d be more of a RAM issue I think? And gmail doesn’t take too much of any types of storage, just the CPU issue.

CPU Pegs basically immediately on launch, will do it even with no tabs open, has for about two-three months. I’ve been using Brave a year or so and know it wasn’t doing this most of that time.

The Task Manager tool (didn’t know about that ) seems to make clear it is something about the BAT Ledger service?

If there is anything I can do to reset that somehow or troubleshoot it specifically to help improve things going forward, please let me know. A new profile seemed to have the same issue when I tried it as I noted on other threads.

editing this to add that this seems to correspond to another bunch of reports you can see here, most on macos, though not all, most with no meaningful response, many closed with no response. All noting the same behavior I’m seeing, almost totally pegged CPU. https://community.brave.com/search?q=bat%20ledger%20service%20cpu

For any users still encountering this issue:
We apologize for the inconvenience and hope it helps to know that we believe we’ve found the issue – we should have a new version with the fix out as soon as we can.

Did that but it seems what you refer to may be different from my BAT Ledger problem (not surprising there is more than one issue, theirs seems more sporadic) Any suggestions for what ails mine @Mattches?

Here is a screenshot with the flag you noted enabled. Other details as noted in my previous comment. 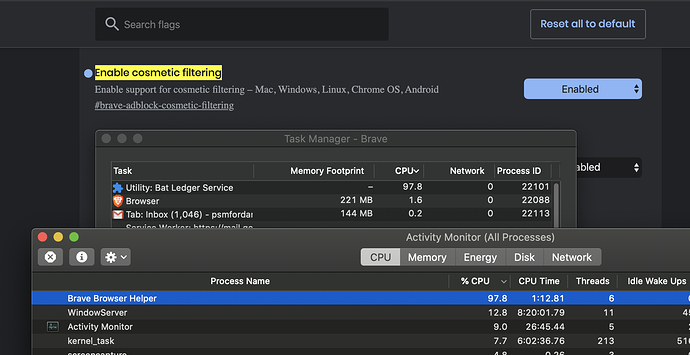 Bat Ledger Service uses 100% CPU, that is until I end process and then it starts working again after 30 seconds.

@psm1,
There’s a chance that you are experiencing something different entirely –

Can you try disabling Hardware Acceleration in settings to see if this resolves the issue?

@Mattches I’d certainly agree it is likely something different than the cause of the more spikey but not consistently high CPU usage. But it seems a widespread issue nonetheless based on the link I shared to many other threads describing similar experience, most without significant response. And from the additional person here reporting exactly the same thing shortly after I did.

I’ve had hardware acceleration off from advice in a previous thread or two attempting to get this figured out. On or off it doesn’t seem to impact the ledger service. I don’t think anyone ever responded with what the next troubleshooting would be after reporting that back. That has tended to be where the suggestions for additional troubleshooting steps stop.

Let me know what else I can do to help y’all get to the bottom of it. 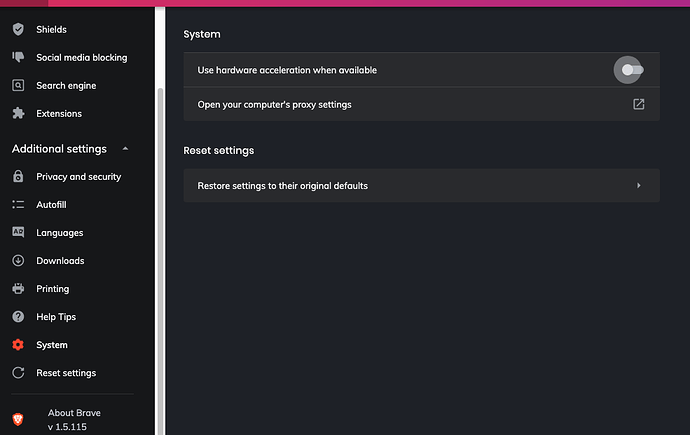 @psm1,
Do you have any extensions installed in the browser at this time? If you were to create a separate profile on your machine, would you also see the BAT Ledger Service spike in the same way?

I only have two extensions installed at all but both are disabled to see if that helped with this. Also both had been installed long before this problem appeared although perhaps some updates to them could have triggered it, that seems unlikely to me though clearly not impossible.

Is Windows Defender your antivirus by any chance?

If that was directed at me, no. I’m on macOS Catalina 10.15.2. This is a company machine, it is running Forticlient Endpoint Security nothing around that changed that I’m aware of between the time this was not occurring and when this became a consistent issue.