I did not install anything new on my PC, but since about 2 weeks the Brave browser consumes about 11% of my CPU power and about 2,400 GB of memory.
It constantly reads/writes on my hard drive with av. 40 MB/sec

What can I do to stop this?

Since posting this the problem magically disappeared.
I’m ok with that

I have noticed this intermittently on Brave Nightly recently. I did a clean install and the high usage resolved, but still uses more CPU than Edge Chromium. Any thoughts from the Brave team?

Agreed. Mine has been around 30-40% cpu usage recently and before it would always site around 4-5%. It’s the main reason I switched to brave. Tried clearing caches, cookies, etc and no luck.

Currently I have Chrome open with 20+ tabs and Brave with 10 tabs and the pic below shows stats from htop for your ref. 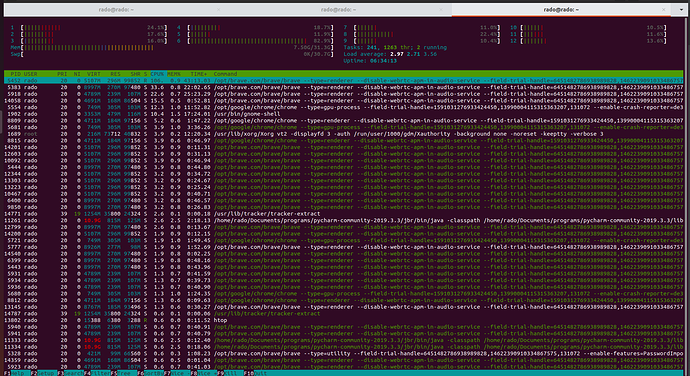 Nightly / Dev / Beta all had an issue too which we solved (involving the Bat Ledger process. That was a different problem)

Here’s something you all can try in the meantime, as a work-around:

Please let us know how this goes! Thanks

Just tried this on linux and so far I’m seeing an improvement on youtube videos. Before this change regular 480p videos on youtube were causing 100% CPU…now its down to 35%.

@Caddark, they closed my topic so i will respond here:

Did you try fixing it? What kind of troubleshooting did you do?
The app was Updated, i tried to “recover to original settings” without sucess (more than 30 min lagging the he*l of my PC)

Do you remember what you were doing when it started?
Nothing really important, watching Youtube videos and using Instagram.

What other applications were open and/or running?
Only Brave, i did some tests and it was 100% Brave “the guilty”

Did you download anything or make any administrative decisions around that time and during the lagging?
Nothing different from usual.

Which windows system do you use?
10 Pro

Did you notice any fluctuations in the lagging during use of the browser and/or other applications?
Youtube videos where the worst part, they were lagging and freezing all the time

What led you to determine the origin of the issue is related to Brave?
Task Mananger

If this problem is not usual i will do some tests on my PC, antivirus and this type of thing and try to reinstall it

@Harzeckz May I ask do you have any extensions added to Brave? And have you tried using the built in browser task manager? Try pressing Shift + Escape to bring up the Task Manager for Brave, and take note of any processes that look foreign. (Not the Windows one)

Also, what version of Brave are you on? This can be found at brave://settings/help

After further usage of Brave 1.5.113 on my Mac OS Catalina the issue still persists. Here is the task manager 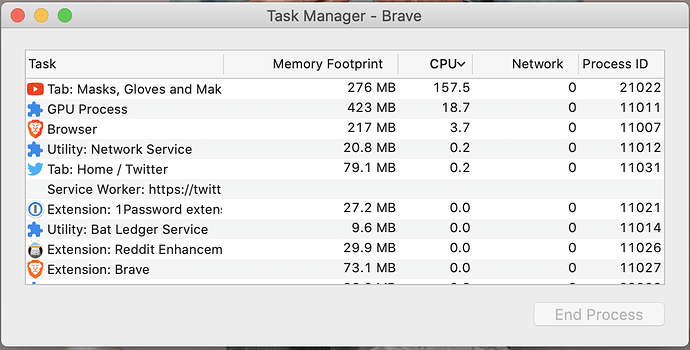 It’s on Youtube and Twitch sites which causes the high CPU usage. This didn’t occur on the previous version

For those users that have been experiencing various CPU/performance issues, could you please download the following version and let us know if things have improved. Once we get enough confirmations from the community, we’ll push this version to our Release channel ASAP so everyone receives the update.

After some hours of use on streaming sites and youtube the cpu usage is way down now with this new version. Thanks

I’ve been having the exact same issue for roughly the same length of time. 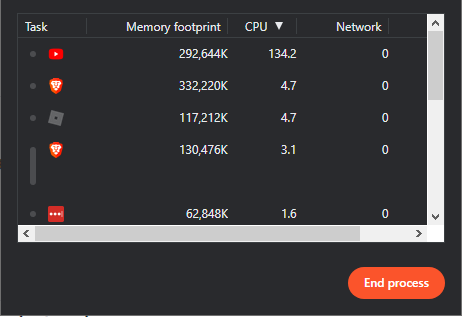 The suggested workaround doesn’t help in my case (GNU/Linux - Ubuntu 19.10). Just starting the browser causes fans on my laptop to spin-up after a few seconds. I have one extension (Enpass) but disabling it makes no change. Haven’t tried the linked .114 versions yet.

The issue seems to be fixed now.