So is there anything else I can do? If not I may just go on and ditch the browser. I enjoyed being able to earn BAT but since I can no longer do so it feels redundant.

It is the browser to be flagged, or the exchange account? Never understood how it works the flag system since I luckly never had this problem.

It tells me that my brave rewards profile is flagged, on Uphold I’ve not been told anything on there side so it seems to just be brave

I want to tag @Saoiray on this, surely he knows this things better than us, - if a browser is flagged, and is only one of others linked to an exchange, will the other rewards come as usual? Or the entire profile (Gemini or Uphold) will stop receiving BATs from Brave?

I’ve tried several times to get in touch with Brave support only to be told “Your account has been flagged for irregular account activity and will not be reinstated.”

How did you contact them? If you submitted a ticket and someone from Brave has told you that you’re not going to be reinstated, then there’s nothing more you can do. They won’t tell you why you’ve been flagged as they had people use that information to try to learn how to better scam Brave. I will say they almost always unflag accounts when people submit Support Tickets. Thus if you did this and they responded you say, then they have no doubt at all about your violation and aren’t willing to unflag your account.

It is the browser to be flagged, or the exchange account?

Usually it’s the browser/account only. So if a person uninstalled that version of Brave and then installed a fresh instance, it would earn BAT. The only thing is sometimes the flag is also established via the exchange. Meaning if Firelord erased everything and started fresh, they’d see ads and earn BAT. But then when goes to connect to Uphold, it may realize it’s the same person who was flagged and then end up giving the notice about being flagged.

I’m not sure how they have it primarily done now. Obviously a lot of people were getting caught doing things they shouldn’t and then just would try reinstalling and starting over. Brave was and is working on preventing that.

if a browser is flagged, and is only one of others linked to an exchange, will the other rewards come as usual?

I kind of touched on that above. It used to be just that instance of Brave, which would be tied to the Wallet Payment ID. Though I’ve heard of others who claimed the flag notification came when they tried connecting other devices. So they may have merged that and been able to tie flagged accounts to their linked exchanges as well, to prevent people from circumventing their suspended/flagged accounts. That said, unlinked browser will 100% earn BAT if you do a fresh install and don’t connect to an exchange.

Thanks, was just curious since read of many users being flagged and not earning for months, so even i thought a new installation was the simplest way to resolve.

read of many users being flagged and not earning for months,

Majority of those just trusted the notice and the official page, which said:

No action is required on your part. Your Brave Rewards profile will be automatically reevaluated on a regular basis to determine when (or if) the flag can be removed.

Feel free try again every so often to see if the flag has been removed.

In those, it never seemed to automatically undo anything. If it does, then it might be an extremely long time. I’m not sure the official time or reasoning on that. However, anyone who has submitted a support ticket generally had their account flags removed right along, within a week. Yet without searching through the forum or having someone like me letting a person know to submit a ticket, they wouldn’t know what to do and would just wait.

One of these days I’ll likely bring it up and see if they can consider modifying things. But right now that’s a pretty low priority compared to everything else they are working on and trying to resolve.

Are you using a VPN? Did some digging in the community and found out that if you use a VPN they think you are trying to scam them to get more rewards than you are allowed. I think they should at least tell you when you are signing up for rewards that you will get permanently flagged if you decide to secure your device with a VPN. They say they want you to use them so you don’t give up your privacy, but it would seem they’re not really interested in your privacy. For me the choice to ditch Brave wasn’t just losing the perk of earning BAT but also having to switch to a different browser when a website didn’t work with Brave.

you will get permanently flagged if you decide to secure your device with a VPN.

That’s not true. VPN can get you flagged if it doesn’t match your Locale data from your computer. This is because you do have Terms that exist in Brave Ads/Brave Rewards which show that you’ll receive ads according to your region and you’re not to bypass regional restrictions.

That said, those aren’t permanent flags unless they see blatant disregard. Such as you live in an unsupported region that isn’t supposed to earn BAT and you try to spoof things to appear as if you’re in a supported region to earn BAT. That’s a big issue and is fraudulent activity.

hey say they want you to use them so you don’t give up your privacy, but it would seem they’re not really interested in your privacy.

They say use VPN but have it show in your region. If you’re going to try to spoof your location, then turn off ads for that timeframe. If you want BAT from Brave Rewards, then you follow the policy of the program.

I had been using Brave with rewards for several months. No VPN. I live in North Carolina. Mom broke her hip so I was gone for 7 days to another state. Husband installed a VPN router while I was gone, I think it shows us in Georgia. Got home and my account is flagged. The only thing I could get out of support was I was not going to get it back. Kept digging around on the community forums and finally found something that talked about VPN being a no no with rewards. So I figured that must be the reason since that was the only thing that had changed with my computer. I had hubby turn off the VPN for my computer but support has not responded back to me so I’m left to assume that it is permanent.

As far as websites not working with Brave I never thought about saving a link to it. It’s been almost 2 months now so I don’t even remember what websites for sure.

I live in North Carolina…

Husband installed a VPN router while I was gone, I think it shows us in Georgia

If it was just that, then usually wouldn’t be a problem. I mean, their ads to target by state so it could be, but don’t see too much of an issue as long as within the country. Not sure if that would be the only thing or if maybe something else happened that you’re unaware of.

How long ago did you create a ticket and hear back from Brave? Also, do you know who wrote the message saying won’t get it back?

I noticed the problem at second week in June and thought it might just be a glitch that would resolve. When it didn’t by the 21st I opened a ticket. I’ve attached a screenshot of part of the email correspondence. 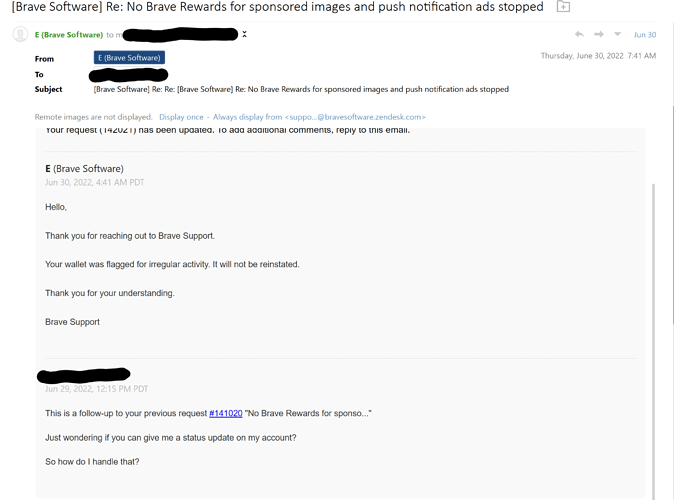 When it didn’t by the 21st I opened a ticket

Ah, ok, so fairly recent. Guess part of me was hoping had been a while and could give you an answer. It’s not that usual to see them say it won’t be reinstated. Typically means they feel there’s irrefutable evidence that something was done that shouldn’t have been and it was done intentionally.

Even if it wasn’t and it may have been someone else, I’m not sure what to say. And because people used to take information given on the “why” they were flagged to then try to learn to evade detection, Brave stopped telling people how they were caught or why they were flagged.

So if they think it was intentional should I not try to make a new account with a fresh install? Not a tech guru so sorry if I’m asking stu pid questions.

If your browser was not verified with an exchange you are free to make a fresh install, since no previous infos will be in the new one; even if it was verified there shouldn’t be any problem, unless something caused the flag persists to your hardware.

Regarding the VPN issues, was thinking they should implement a system bound with your opening profile, so when you change state/country for whatever reason you’re using a VPN the reward system would continue to send ads related to your region. Just an idea, less flagged users and less complaints.