@lunno3
Brave was and is designed with privacy in mind. So Brave was looking for another way to synchronize data without having accounts.

As you can see this is far more complicated than the devs might have expected initially. Unfortunately management decided to tell everybody this feature is ready while it was far from being ready at all. Somit will still take some time before sync will work smoothly.

Pardon my ignorance, but why having accounts would impact someone’s privacy? If you do choose to add a google account in it, it means that the user wants it and knows that his activity would be synchronized on his google account.

Even if it does, they could just add a little warning under the “add account” button explaining why it does impact his privacy and then let the user decide.

You’re right. Brave could implement this. But Brave consciously decided against incorporating any Google services in Brave. Brave was designed to be a privacy focused alternative to Google (Chrome).

Well sounds like I’ll have to stick to chrome then, otherwise I’d always have to copy and paste things from my desktop to my phone.

@Felito will it let you just DM me the PDF?

Hi @GrundleJuice sorry for the delay, your panel seems like it should be OK, we have a current outstanding bug where sometimes devices can get confused and think they are the same one, but I don’t believe that’s the case with yours. Would you have time for a screenshare this week to get to the bottom of it? If so, maybe you can DM me some times that work for you and contact info.

@lunno3 and @Brave_user, so yes, we don’t use the Google services because those services give them insight into your private bookmarks. The scheme we have has completely encrypted records but as you see, sometimes that makes problems harder to debug. We are actively working on some better debugging tools for Sync while working on a number of issues to make it more reliable.

Yes, I should be able to provide a screenshot. What exactly would you like to see?

I really wanted to use Brave as my primary browser but with this broken sync function, I just cant use it. Once its working solid, i may try Brave again

And they still won’t add the beta tag to the sync feature. Unbelievable.

After downloading latest version 1.6.0 of Brave from github, but there is still blank white in Sync when dark mode is on, so it’s annoying.

When it will be fix? I’ve been waiting for months. 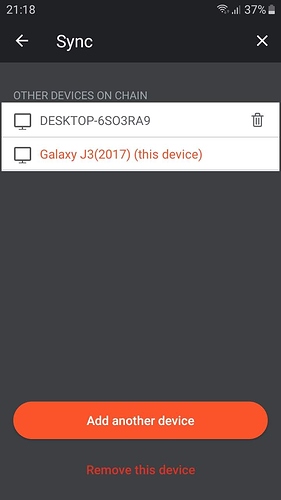 Yo i was able to get the computer to sinc to the android. Problem is like you said each restart and bookmark moving trigger the sinc. Now after restart the app 30 time to populate some bookmark there is still half who dont show up. And now its not populate anymore. And still half empty in the android i try retrigger it by moving new link on the computer and that work, its the old one who dosent work and populate folder just stop for some reason like if its run on a timer of 20 second. The bat wallet sinc dident work. But its seem if i take each of my bookmark one by one and delete and put them back they populate. So its like the old bookmark just act weird. Also its took 5h to sinc the computer to the android.

I still have not managed to get sync working right after several months… is there any fixes to this in the pipeline? Does anyone have any suggestions about alternative ways to save bookmarks?

It’s really buggy on desktop too. I wasted hours trying to get two Windows PCs to sync. It was often pulling some older/corrupted version of the bookmarks onto one or both PCs, even after doing full uninstall and clean reinstall of Brave on both machines multiple times. I eventually gave up on the 2nd pc, and just had 1 PC setup with sync to backup the bookmarks. Reinstalled Brave, enabled sync with my existing phrase, bookmarks synced and looked ok. Later the bookmarks got magically screwed up again.

I give up on Sync for now. Both of my PCs now have a fresh install of Brave with local bookmarks and no sync.

I signed up just to comment on this issue.

In my ~20 years of web dev I have used and created many things that have eventually entered the ‘beta’ stage. This isn’t a beta. You can call it one if you like, but it is fundamentally broken.

I synced between my phone, my laptop and two desktops. Bookmarks rarely sync, and when they do it’s in some way where they’re duplicated, removed, reordered or some other mess that makes it a total pain in the arse to manage. I persisted for months, turned it off for a few months hoping an update would fix it, tried it again for the last week and it’s still terrible.

It’s simply easier to export bookmarks and import them on other devices or to use the EverSync Chrome extension.

I totally agree. But worse is Brave dropped the beta tag and declared the feature ready. I suppose marketing thought nobody would care and it would look better PR wise. It does not!

Couldn’t get bookmark sync to work right between my two desktops. Took a long time first time around, and it really screwed up my bookmarks when it finally started to sync. Can’t even tell all that it did other than to double my passwords on both sides. Did some scrambling of the order as well.

Worthless, tired of unscrambling my “sync’ed” passwords, and have disabled it. Using manual sync. At least the results are predictable, although takes more time.

It’s simply easier to export bookmarks and import them on other devices or to use the EverSync Chrome extension.

Since the last update and the revamped bookmark structure the EverSync extension does not longer work.