Brave browser said I would receive 31.9 BAT but today when I clicked to claim it it was changed to 25 BAT, and my estimated earnings did not change. I know its only 6-7 BAT but It seems weird that it would just reduce like that.

Anything I can do to get this back?

UPDATE: The actual bug involved in this issue has actually been fixed already and was pushed in the update to v1.40.x: The reason the issue appears to still be ongoing is likely due to to the amount of time required for the browser to process any payment tokens “stuck” in the browser. While it will vary for each individual user based on the amount of tokens that need to be processed and how long their browser has been running (among other factors), this issue will (for users who have updated…

Thank you I appreciate the help.

me tooo
I was supposed to receive 5.5 instead I only received 4.0
also in the second browser, instead of 2.245 only received 2.0
no idea for this, looks like a problem with majority of people.

@Saoiray The banner X BAT arriving in Y days shows all the already reconciled/cashed-out Ads last month. And it’s entire value should be the payout.

What post by Mattches refers is the Ads that could not reconcile/cash-out last month and they won’t even be part of the banner X BAT arriving in Y days this month. So whatever is shown in that banner should be the payout.

Well, I’ll trust what Chriscat, Mattches, and others have advised. Sadly a lot of people are making assumptions. From what they’ve mentioned, they noticed an error and fixed it. Unfortunately it was too late for some. Browser said one number but their servers didn’t necessarily say the same. Issue happened in between. So they asked people to leave browser running and all because they have set it to communicate with servers. They are hoping it catches the discrepancy in pay and adjusts to the following month.

At least that’s been the official response. But I guess everyone will just do and believe whatever they want. As for me, I listened. For a few months I was shorted BAT. This month was supposed to get around 20 BAT. Instead, I ended up with 53 arriving.

I’ve always told people, Brave does right by Users. It can take time to catch up but if you communicate and listen, always works out.

Same happened to me 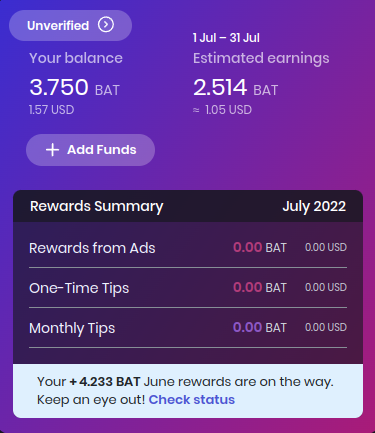 Happening in my other browser instance also 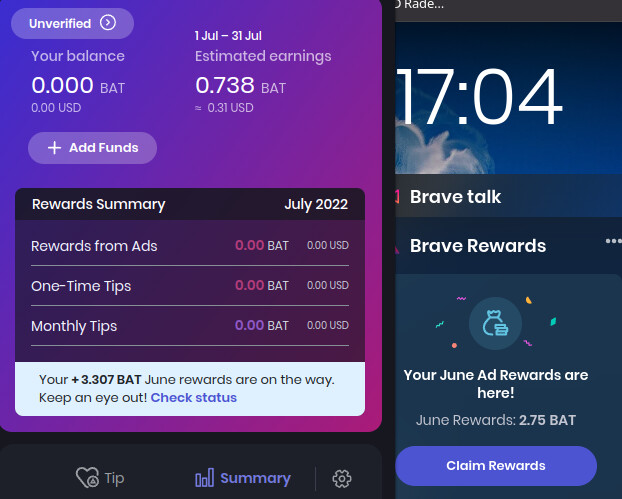 @Matches can you please take a look here?

this is not a roll-over problem

I didn’t say it was. Please try to pay attention to what they said and what I said. This is different than the rollover issue. In rollover, it would have shown the difference in balance on your browser. This issue isn’t. The issue this time is tokens being sent from the browser and received in the system. Browsers had sent but their servers didn’t receive it all.

So in having the browser open, it would resend information. They were trying to fetch info, but they also advised that it likely would occur too late for many users. Even now, they are saying if you go to do it, you won’t receive it this current rate but they are hoping the system will obtain the info of what it SHOULD have paid out and then see what it ACTUALLY paid, then send the difference the following month.

@Matches can you please take a look here?

Anyway, if you need Brave to look at things, you need to submit a Support Ticket. Just keep in mind this is a known issue, has official responses advising as I have repeated to you, and that they generally cant do much of anything in regard to payments until after ALL of the current payments are sent to Users. That said, it won’t necessarily hurt for you to create the Support Ticket now. So go do that at https://support.brave.com/hc/en-us/requests/new?ticket_form_id=360001302431

My above post/comment aside. I did reach out to Chris (Miyayes) asking for more details. Hopefully he’ll either correct me or provide more information to help clarify what I was thinking/saying has been mentioned.

At the same time, I’ll likely bring it up to @luke.mulks and @jsecretan in the Community Call on Tuesday as well. I’ve tagged them here hoping that they’ll see it and be ready with answers then as well.

Thank you for all the information you’ve posted here. I did want to ask if there is anything I could do or should do right now? Or, do we wait for a potential solution or reimbursement for those affected?

is anything I could do or should do right now?

Main thing is just to make sure you’re leaving your browser up and running a bit, just in case I understood things from the team properly and that will help your device/browser to relay information to them.

You can also create a Support Ticket now if you’d like. It would at least put you in the queue for assistance. Just be advised that until all payments are complete, they might be limited in what they can do. But might reach out to get more information regardless.

Big thing with Brave is not to panic or rush to conclusions. Mistakes happen but I’ve always seen them make it up to people. The ones who have gotten shafted were people who tried solving things on their own and ended up violating Terms and/or got themselves flagged.

Yet another impacted party here. This has happened before

Leaving a browser open for long durations will only process and cash-out current earnings. The payout banner (showing reconciled/cashed-out balance) X BAT arriving in Y days will not be processed by this (and they don’t even get relayed to servers thereafter).

And what I believe is, this lesser payout than stated in the payout-banner, has two different issues-

they are hoping the system will obtain the info of what it SHOULD have paid out and then see what it ACTUALLY paid, then send the difference the following month.

might solve (2) but (1) would require more intense scrutiny. Neverthless an acknowledgement of this would’ve been nice (previous acknowledgement was for high roll-over issue).

@Saoiray Can you ask in community call, is Brave aware that some Ads were reconciled/cashed-out by assigning them 0 value public key from payment issuers last month and if Brave expected those ads to be paid-out still? (both parts are important)

The following poll, may interest:

What is the difference between the Rewards"X BAT is arriving in Y days"(A) notice amount and the Received (R) payout amount. This is a multiple choice poll for users with multiple Rewards wallets. Max 7 entries. poll What is the total difference between all your Rewards"X BAT is arriving in Y days" (AT) notice amounts and the Received (RT) payout amounts? Select one poll How many Rewards wallets do you have? Select one (all Brave versions included) poll

Can you ask in community call, is Brave aware that some Ads were reconciled/cashed-out by assigning them 0 value public key from payment issuers last month and if Brave expected those ads to be paid-out still? (both parts are important)

Umm, I can try. All depends how many people are on and asking questions. Sometimes there’s plenty of time and others it’s hard to get even a single question in. Anyway, might just be beneficial to ask if @steeven, @SaltyBanana, and/or @tmancey might be able to answer that and maybe even advise in particular if the “missing BAT” is different issue and solution than what was mentioned by Mattches on THREAD: "BAT payout significantly less than estimated earnings" issue

I was supposed to receive 7 BAT but nothing came

Can you ask in community call, is Brave aware that some Ads were reconciled/cashed-out by assigning them 0 value public key from payment issuers last month and if Brave expected those ads to be paid-out still? (both parts are important)

So I did end up asking. They answered in the last 10 minutes or so of the call. You may want to listen to it all though if you have time. Thanks. I listened last 10-12 minutes. Your all 3 questions were great.

For 1st one, I can’t believe they didn’t accept that less than actual pay-out is a different issue than roll-over issue. As per me, they are related definitely but different, to be precise.

For my question, I know that this issue was fixed but if those Ads paid-out or not this month, they stopped short of confirming. And ofcourse I meant asking about view confirmations not clicked confirmations.

And I’m surprised that they said that some were very old Ads and “not relevant” (to be paid) in the queue. Didn’t expect that. I couldn’t know how rare this situation was, I saw in mine so I thought it could be possible for a lot of users.

Although I gave some thought in framing my question but you narrated it, just like that, in 2 seconds.

And response to 3rd question was understandable and on expected lines.

Thank you Saoiray. The question you asked about the banner payout and actual received was the exact issue I had. I appreciate you bringing this up and for all of your help.