Description of the issue:
When opening youtube videos, the video glitches. 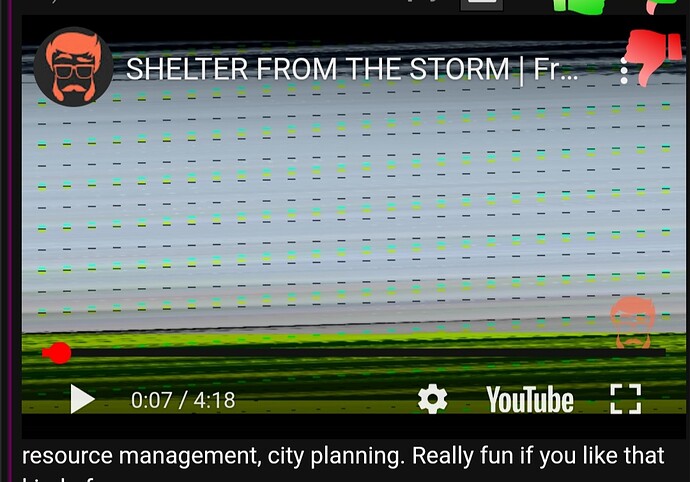 I’m having the same issue. Replying to try and keep the topic open so that someone can maybe help solve this.

I am unable to reproduce this issue on my Samsung Galaxy device. Can you please ensure you update to version v1.30.87 (latest) and test again?

I just had this issue happen to me on my Samsung Galaxy S10+. Brave is fully updated (1.30.87). Some videos work, some don’t. It’s a bit of a mixed bag, but it’s getting more and more frequent.

@Adotiln,
That is very strange. I was able to watch that same video (in your screenshot) without any issues. Does Shields up/down make any difference at all?

Yeah it’s updated and still does it.

I tried that too, I really dont know what it is.

Would either of you be willing to test he behavior on Chrome or another Chromium based Android browser?

Turning shields off didn’t help. I cleared my cached files (but not my browsing history yet) and re-enabled shields and it worked for a bit longer, but what was really weird was that when I tried to skip to a further part in the video, the issue occurred. Then after refreshing the page, the glitching occurred sooner than it did previously. As mentioned previously, it seems to be a mixed bag. Sometimes videos I’ve never had an issue with do this, and sometimes videos that have done this before are able to play just fine. Sometimes switching to the desktop version of the site worked, but now even that’s a toss-up. I’ll definitely test this on Chrome later, though.

Okay. So I tested both the video I had the screenshot of and a video that I know I’ve had problems with on Brave before. Weirdly enough, the video in my screenshot ran perfectly fine on Chrome as far as I could tell, but still gives me problems on Brave. The other video worked perfectly fine on Brave, but on Chrome, it glitches about 6 or 7 seconds in. This is the video: https://youtu.be/sMk-HPBF6Mw

So maybe there’s some sort of problem with chromium browsers on Android in general? But again, it’s so random and as far as I can tell, there’s no other common denominator here. Audio still works on every video, it’s just the video itself that gets glitched out.

I tried running youtube in Chrome, the Samsung browser, and iron. It seems to be unique in brave. But I think it may have something to do with not running on a stable internet connection. On wifi I have no problems, on mobile internet I have problems. I honestly don’t know how that can be fixed.

That’s odd. All of my issues have been on WiFi as I rarely use mobile data for YouTube. And as far as I know my connections are pretty stable. Unstable connections could be a factor, but videos run perfectly on the YouTube app. On both Brave and Chrome they randomly glitch out for me. Haven’t tried any other browsers yet. I’m gonna try messing around with Brave’s settings a little bit to see if I can find some sort of solution.

EDIT:
Not sure if anyone here got notified about it, but I may have found a solution. I had to reply as a linked topic, so here’s the link to that: Youtube glitching on Mobile (possible solution)

Hey everyone, I think I know what causes it. It might be a network connectivity issue. The better the reception the videos don’t glitch like that. The worse causes the issue.

There’s also something else where it never happens even if I have bad reception, I have no idea how to describe it.