What does Brave mean by "relaunch"?

What is the definition of “relaunch” as it’s used in the About Brave dialog box?

In my view, that would normally mean exiting the program and then restarting it.

But though there’s no ‘new version’ indicator (upper right side of screen), and I’ve reset my computer and ‘relaunched’ Brave, I am still seeing a prompt to “relaunch to finish updating” on the About Brave screen.

Why would one in effect have to relaunch twice to update to the latest version?

I would OK the Relauch. And if I suspected an interruption of an important download, such as an Installer, I would manually run a subsequent, full download.

There, click on the latest version number. In the resulting window, scroll down to the Installer that is appropriate for your Mac computer (Intel - x64) . . . and at your discretion (what you believe your computer needs), the .dmg or .pkg installation file.

Generally, if you have had some installation problem with the .dmg file, try the .pkg file.

Each entry, below, is linked to its GitHub source – you can Right-click on the entry, to verify the URL address:

Thanks for that, but it exceeds my technical grasp. I’m also not sure I made what I was referring to clear.

Below is a screenshot of what I see when I click on About Brave.

It seems to indicate that I don’t have the latest version of Brave (Beta in my case) installed.

But given that I had closed all programs and restarted my Mac computer, and there is no indicator of a more current version on my Brave screen (in the upper right of the browser screen), I don’t follow why this situation always occurs (it’s not a one-time thing).

So why does the About Brave say something different?

Beta and Nightly versions are not ready for prime time. Expect the un-expected.

Your Mac uses the Intel CPU, so I will remove the Apple M1 entries, of my previous reply. (Done)

Please be sure to routinely back up your BraveSoftware folder at:

Make note of the backup - that the BraveSoftware folder is for whichever applies:

@mk7z,
When you’re prompted to relaunch it means that there are still some data from the update that need to be applied and require the browser to be closed as it happens. Click relaunch and you’re good to go.

What I meant to question was why two separate ‘update’ actions are apparently needed to fully update the browser.

(I also wanted to clarify what Brave means by “relaunch” – I’m assuming it just means exiting and then restarting the browser.)

In case the issue wasn’t clear, here’s an outline:

Why didn’t the exit/restart (“relaunch”) update the browser to the current version?

Or is that prompt (in About Brave) possibly not recognizing that the update has already occurred?

Or is it necessary to update through the prompt (upper right of screen) in order to achieve the update in one step?

(I also wanted to clarify what Brave means by “relaunch” – I’m assuming it just means exiting and then restarting the browser.)

I believe this happens when there is more than one update available. Seeing the initial Update button (where the main menu is) means that there is an update ready to apply after relaunch. Once done, visiting the About Brave page will trigger the browser to look and see if there is an additional update available. If so, it will initiate that process and, once downloaded, will display the Relaunch button to finalize/apply the new update.

PS. The arrangement of the [Global] Shields settings among the Brave Browser > Settings . . . has changed.

And there is a re-arrangment of the design of the Brave Browser Shields (Lion icon - right end of URL address field) settings. In particular, now, in order to see the items blocked, you click on the number: 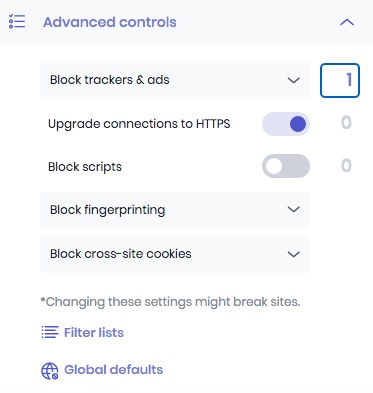 @mattches Thanks.
The updating procedure invariably seems to require going through two separate relaunches.
Is there no way to get these updates in one shot?

► Relaunch from the About Brave screen.

► Second relaunch from the About Brave screen.

I assume the parts about the updated Shields settings were ‘extra’ (i.e., not related to the Relaunch topic).