There is a temporary problem verifying with Uphold

Hello, I’m having trouble verifying my account with brave browser, it says:

There is a temporary problem verifying with Uphold. Your Brave Rewards will remain in a Pending state and retry automatically, but you can also try again later.

@spikespiegel I’ve actually reached out to a couple people at Brave about this, as people have been getting the error. I’m hoping to get them to look into it more but let me reply with what’s been mentioned.

All of that said, it’s usually very difficult to know what to tell a person. You can try those things. Also, if you’re on a VPN, try to disable it while connecting.

Sorry I don’t have anything more specific or helpful, but figured I’d give you a reply with the base idea. Only thing I can say is lately Brave has been suggesting people reach out to Uphold. Then if you reach out to Uphold and you mention Brave, their support is lazy and will just tell you to contact Brave. So it’ll be a cycle. If you do contact Uphold, don’t mention Brave but just try to verify they have all your KYC done. Then once they validate that, maybe just mention Brave and see if Uphold can check that it is set for the API that talks to Brave.

After you have those responses from Uphold, then would be time to submit a ticket with Brave, which you do at https://support.brave.com/hc/en-us/requests/new?ticket_form_id=360001302431

It’s been over a year since I’ve verified my account, but it’s still showing as verified in Uphold.
I contacted them earlier about Brave and they told me my region is not supported, so I replied that I used their wallet for a long time to receive money from Brave, then they told me to go talk to Brave support. Not sure if my account have been flagged, my earnings are working just fine, I’m receiving ads and money. I’ve even reinstalled my browser and started using brave rewards from scratch (I completely deleted the wallet folde inside %appdata%). My internet connection is fine, my browser is up to date, Only thing I haven’t tried was backing up my wallet and restoring it. I have also removed brave from my uphold account and integrated it again. I also haven’t seen any email from them asking me for further information about KYC, unless in one of these days that email fell right into the spam folder. Anyway, everything on hardware level seems fine imo.

about Brave and they told me my region is not supported

Usually you get the specific Error Message for that, but yours could be a mix of issues. Just so you know, it’s possible your region really isn’t supported. Brave has had a lot of issues this year and restricted the ability to link to Uphold or Gemini down to 19 countries. So if you’re not in one of those countries, you wouldn’t be able to link, even if you’ve used it before.

You can read in extensive detail in my Topic where I’ve been providing regular updates. That can be seen at PSA: Unsupported Region

Where can I check a list of Uphold supported countries? I tried searching but couldn’t find anything.

I linked it right in my prior comment. Where I said “Otherwise main official article is:”

region is not supported

region is not supported, im from Chile, what can I do to not lose my rewards?, Uphold doesn’t work anymore.

For me it’s saying my rewards are already on the way. It looks like I’ll lose my rewards.

Why do you think that? It shows that to everyone, regardless if you’re Verified or Unverified. Either it’ll pay and receive at Uphold if somehow still connected on the back end for this payment or you’ll have to Claim where it will store within your browser.

The highlighted part shows what the Claim buttons look like → 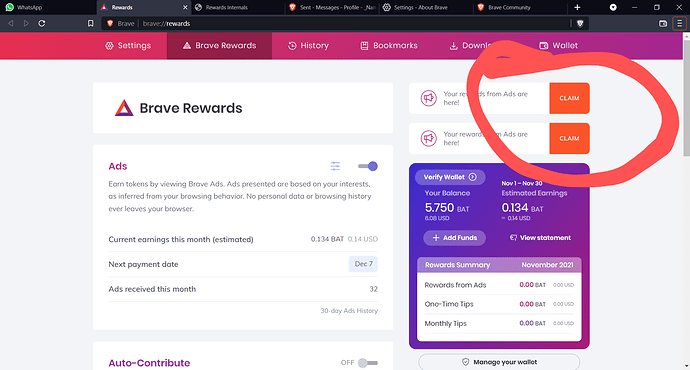