I installed Windows 11 on my computer (full installation) today, I installed Brave and I am not able to sync the account on my mobile.
The computer’s brave says that the words that are 24 in total are outdated for this version of Brave (Release Notes v1.41.100).
The same version of Brave ( Release Notes v1.41.100) that is on my phone. ( Asus - Zenfone 5 ).

When I put the 24 safe words in Brave it gives me the following response:

-----> This code was generated by a deprecated version of Brave, please upgrade your other device first <----- 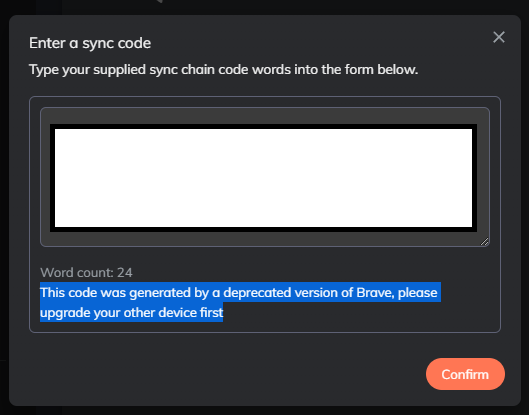 How to solve this problem, I will have to generate a new wallet ???

I have this same problem!

The “updated” sync codes have an additional word at the end (totalling 25) as compared with the “deprecated version” (24).

If you fetch the sync code anew from your phone, like you’re adding a new device, it will display the updated sync code. For me, it was the same as the previous one except for the new word, which made re-entering it on the computer a bit easier. Your mileage may vary.

Hope this helps you. Good luck!

I too have exactly the same problem. What if I reinstalled the operating system and lost the old browser account with that new word at the end, what then?

@kingofdice66,
Not much you can do in this situation, unfortunately. Unless you have another device still on the Sync chain, you can use that device to generate a valid Sync code and use that code to Sync data to your new installation.

So you made changes that broke this functionality! What if people had important data saved , for example some important bookmarks? Not good, not good at all!

@kingofdice66,
Do you have the rest of the Sync code available to you, or did you not copy it at all before reinstalling?

@Mattches I saw your response to kingofdice66 but I am kind of curious about the issue the OP (alex_bassi) is having. Last I knew, sync codes persisted and one was able to safely store it away so you can backup if something happened to your system. Is there a length of time that a sync code is valid before it changes and/or “goes bad?” Or was it just that the change just happened to occur and extra words added? (I want to make sure I’m aware so can update the FAQ for advice on the matter).

Also, for anyone relying on older codes, I guess they are completely out of luck if they didn’t have a second device linked that can generate a new code?

I had it stored somewhere safe and I had used it before with no problems. I searched Google and found that different users had similar problem to mine and OP. I sucked it up, generated a new one, deleted the old one and moved on.

One of our Sync devs gave a good explanation of the functionality here:

Recovery key not accepted on fresh install - had to start from scratch! Desktop Support

@danielson So, if i understand you properly. If i do a fresh install on my PC, the previous sync code is no longer valid? Yes, in general the previous sync code won’t be valid longer. The only exception is if you will use enter sync code in the same day as you get it in settings, the sync code is valid for one day. If so, a user must foresee making a backup of Brave data? Sync is not advised as a backup solution. But if you have two devices in the chain and doing fresh OS installation o…

So if you have your old Sync code, you can use that, then add “todays” 25th word, which is arch as described in the reply linked above.

I can not thank you enough for this.
The upgrade from ubuntu 20.04 to 22 lts broke my machine, so I switched to fedora.

Forgot about the other profile and only synced my dev-profile and was too focused on getting my hardware and machine ready for development again.

And now I could not access ANY of my legal life - insurances, banking, trading, … NOTHING
Thank you my friend, you saved my life with “arch”.

Poor @PhilBrk8. If Brave has such important functionality, why don’t you guys implement a proper sync method like Firefox has, with username and password?

Thanks a lot, my problem is solved

I have a good news for you!!
Try this method,
Step NO 1.
Generate a new sync code (with 25 words)
Step No 2.
Type the old sycn code in sycn box (with 24 words) and copy the last word of the new sycn code and type it at the end of the 24 words.
Step NO 3.
Now click Confirm button
I think this method will work for all those who faced this problem