I think others have had this issue but I haven’t seen it explained very well anywhere so I thought I would try.

I have received my payout for this month on both desktop and my phone.

However with both there seems like there could be an issue.

My phone and desktop are not synced. So on my phone which is the same issue on my desktop browser I received my March payout however my rewards account has not reset back to 0.00BAT and 0.00est US$, it seems it has just continued to keep adding to my last month’s total. 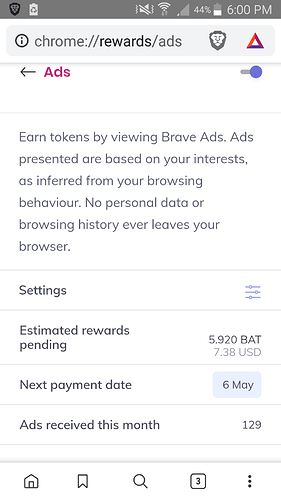 The exact same thing happened with my desktop brave.

Both are fully up to date.

I feel this could become quite expensive if the system believes it has made the correct payout however it hadn’t reset the counter.

Both payouts received were less then the estimated amount by alot.

I think on my phone brave I only received 3 BAT (I’d have to double check) instead of what’s in the image above.

I read through other posts and i am pretty sure others are trying to explain it but they haven’t done so well I think.

If you need more info feel free to send me a message but I think it’s something you may want to look into as according to this month I’ve already earned 5.93 BAT

They should add a detailed note, same for uphold wallet. For new users it’s often hard to understand. Payout runs 1st of the month to the last day. But the estimated pending for instant runs 1st to 6th of the next month. A good thing 'll be to saved the number of viewed ads for the past month and keep the number of current month.

After payout, the balance isn’t up to date, I always have the full amount…
You have to think to take a screenshot of your ads the all 31st, it’s boring.

Perhaps in a future release.

I was just going to make the exact same post. Thank you.
I would like to see why that’s happening

@Keegannye @gringos @VizekonigTossIt that’s normal. The counter will adjust itself in a coming day/s after all payments are processed. And subtract the already paid BAT.

However i still didnt receive my whole monthly payout of BAT so its kind of a 2 part issue. at the end of month for example i was to receive 5.5 BAT i think it was where as i only received 3 BAT and my balance as above still says 5.9 BAT. Unless its resets when the payments finish which means ill have lost some of my BAT if it resets to 0, however usually it resets as soon as it send over to Uphold, not days later

I usually receive all my BAT upon pay out never any issue and it resets, however this month i only received about 1/2 and no reset…

@eljuno “The counter will adjust itself in a coming day/s after all payments are processed.”
OK, but for user, hard to make difference because for example ads for March disappear when April arrive. Two counters (March / number of ads ; April / number of ads) should more appreciate (for me).

Ah ok cool its never happened before to me usually it resets straight away, although i had accumulated 5 BAT by end of month and was only paid 3 but thats ok, if it just ads to next month

Also if it doesnt reset should we contact you guys?

same thing happened with me for 2 or 3 months now, no reset and not fully paid

This time on my side everything worked as it should. I received all my pending rewards, and a little bit more than a day after the transfer to the uphold wallet the “estimated pending” counter was reset.
Having said that: If people still have problems, I don’t think it’s a general problem.

@Keegannye yeah I’m on the same boat. How did you know that you were paid in full?

I wish there was a tab of history somewhere that clearly indicates how much you’ve earned and was paid out within an allotted time.

This month, I was paid out on all my devices, but I’m not entirely sure if it was paid in full.

It all depends on what contributions you’re talking about. What is accumulated after the 1st of each month is paid out the following month. So your balance is going down, it’s normal, but it’s still your due.