Hello. As of today, the 9th of February 2021, I have been transferred 0.675 BAT into my Uphold account, yet in my Brave Rewards tab it says that my account actually should have received 3.675 BAT. So, I would like to know why wasn’t I able to receive the remaining 3 BAT despite having waited until the payments have been successfully done as stated at February 2021 Brave Ads Payout Status

Thanks in advance for your help
Yours truly,
Lmmb74

look at it with more attention… you’ll see that what you received in BAT is the equivalent in how many adds you received in the month already passed.
If you look at the counter of the adds ( brave://rewards/ ) you will see the differences …
What I mean is… check the number of ADDS you received instead of the BAT…

Despite it being as you said, I can actually confirm that under my February rewards summary on my main pc, it says and I quote: “Earnings from Ads 3.000 BAT 1.23 USD”. Thanks for your help though. I will take it into consideration.

Edit: I assumed that such summary was actually meant for the February payment day, but now I’m not that sure, so I hope somebody could enlighten me on that subject.

I don’t know where you are looking at…
you can see in a new tab “Estimated earnings so far this month”
and in the " brave://rewards/ " " Estimated pending rewards "

I am using such version as well, which should be the latest release since my browser says it is up to date. You should be able to read such message on the right side of the Rewards tab, just below the Add/Withdraw Funds buttons.

Well, the next payment is scheduled for the 5th of March. So I will wait until the payments have been fully processed, and post a screenshot of the pending rewards. Hopefully this month the issue is solved. 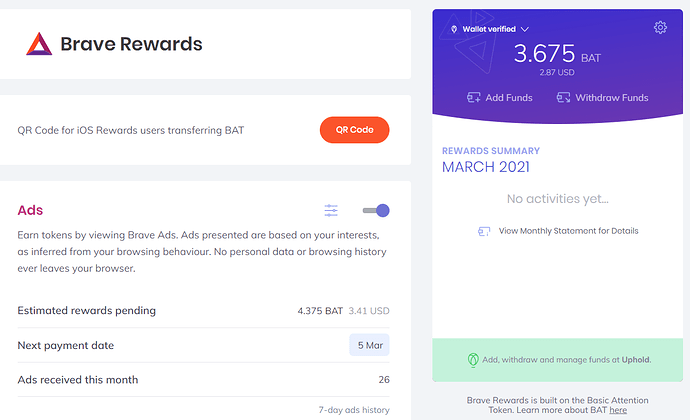 Yet my Uphold wallet contains 0.675 BAT only. I am still missing the 3 BAT from last month. Hopefully this time the payment will succeed.

So… March 2021 payment has come, yet I have received neither the 3 BATs left from February, nor 4 BATs corresponding to the current payment.

Update: After sending a message to Steven from the support team, I was replied a few days ago that a fix for this issue has been implemented, and the next release should include such fix. I will close this thread after checking the next release. Thanks to the support and development teams for dealing with this.

As of today, 27th of March 2021, I have been successfully transferred the remaining 7 BATs to my Uphold wallet. I will proceed to close this thread and thanks to the support team.

I have seen the same problem over the same period. Thanks for continuing this thread because now I know it’s coming from the browser.