Where and how do the ads appear? (fill out below)

URL where ad was displayed:
Banner and Side Box Ad

Screenshot of ad as it appears on the webpage:

What Brave version/Build are you using? (See the About Brave page in the main menu)

Are shields up? What Brave version are you running?

@oddstocktrader,
It looks like some users (myself included) have been downloading v0.67.107 which is actually not the latest stable release. This may be part of the issue – we’re looking into this now.

However the problem addressed here also occurs on the current 0.67.100 version. The ads appear after about 10 seconds.

@Medjan,
Good lookin’ out. I’ve got team members on the update/wrong vers. situation. As for the issue with the ads on gfycat, I’m not able to reproduce this testing on my end. I left the site up on both Windows and macOS systems while writing this reply – both sites display with no ads: 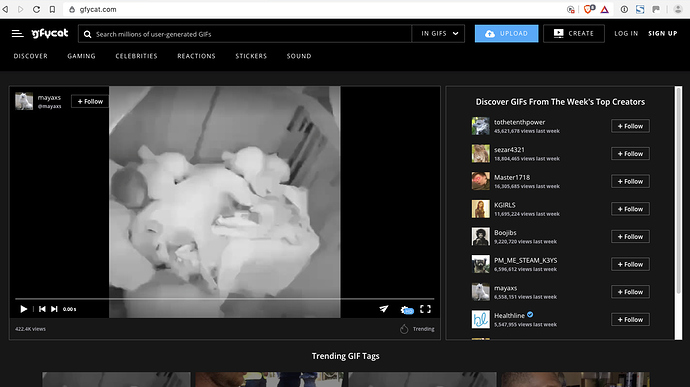 Are either of you using custom ad-block filters in brave://adblock and/or do you have any extensions installed?

Try that exact link that I sent. It is something specific with that page vs just the homepage.

I have one extension installed (Bitwarden), but the problem also occurs in a private tab:

And as @oddstocktrader said, I don’t see an ad on the homepage, but on every video/gif I clicked so far.

In brave://adblock all boxes are unchecked and the bottom field is empty.

Thanks for testing/helping out guys.
So on my end I can kind of reproduce? In release (version v0.66.100 and/or 67.107 – more on this later), going to that exact link, I see the ad(s) display for a brief second before disappearing but the page continuously loads (even though the page/gif fully loads/plays). Now, even after resetting data/permissions for the site, I can’t get those ads to display for the life of me.

Further, when testing on Dev and Nightly builds, the page loads (very) quickly and no ads display for any length of time. Digging into this further – @Medjan, were you using 66.100 or 67.107 in the image displayed above?

Just to be sure, I also cleared permissions/data for that site and then opened it in a private tab again, with the same results. The ads appear after a few seconds and the website is continuously trying to load stuff in the background. I am on version 0.66.100.
I am going to install the Dev version to see what happens there.

Edit: Dev loads the site super fast and without ads. I tried to keep every setting the same as in the release version.

Sorry for being late to this, the site is using an Anti-adblock tech to counter any adblock and force to show ads. Investigating a quick fix, we’ll have better counters soon against these type of issues