Not able to change printing orientation to Landscape

No complicated issue here. The problem is that there is NO WAY to change the printing orientation from Portrait to Landscape. All print jobs print in Portrait orientation. I often want to print in Landscape orientation and the inability to do so is VERY exasperating!

How can this issue be reproduced?
Try to print in Landscape Orientation.

This a long standing problem. Developers, PLEASE FIX THIS LIMITATION.

I use the same version and all works fine

Maybe try printing via the system dialog. Press Strg + Shift + P to open it (or in the normal print window under More settings --> Print using system dialog) and change the orientation by go to Preferences --> Page Setup --> Landscape

@ericxob77,
Thank you for reaching out.
For this issue, do you mean that you’re unable to select the Landscape option from the print dialog, or are you saying that if you select it, the page still prints out in portrait orientation?

Further, as @whitetiger55 suggests, if you use the system print dialog to print, do you get the same results or does it print as intended?

I specifically mean that the option to select between Portrait and Landscape is not available in Brave’s Print dialog. I do, briefly, see the “Orientation” popup and then it vanishes. The same thing happens in Chrome, so perhaps it is Chromium code, not Brave code that is the problem. Printing from the System Print Dialog, here I can choose an Orientation, and choosing Landscape prints in Portrait nevertheless.

As an aside, “Orientation” in the system dialog is under “Layout” or “Printing Shortcuts” (not Page setup) depending on what printer I’m using.

The computer is running Windows 10. The printers are either a very old HP LaserJet 2100 or a very new HP ENVY Inspire 7900e ink jet printer.

I see the same disappearing “Orientation” popup in Brave on a machine running Liunx Mint.

It likely is a Chromium issue if you’re seeing it in Chrome too — which also likely means the fix for this issue will come along with a Chromium update and wont’ require any code changes from our end. Just to ensure I understand correctly — are are you saying that the entire layout option changes, or does the Landscape option change within the Layout dropdown? 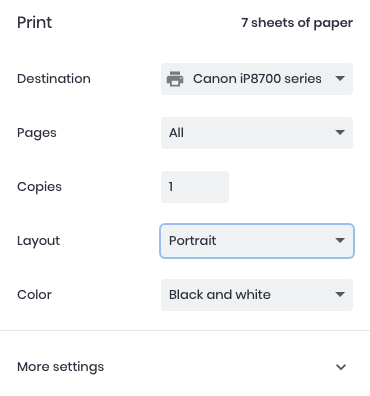 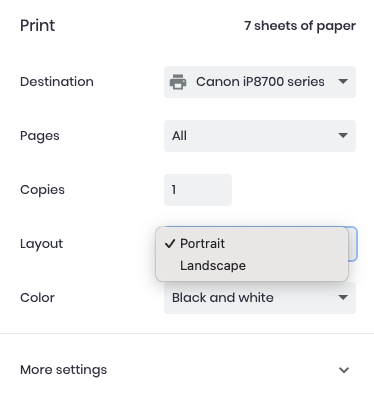