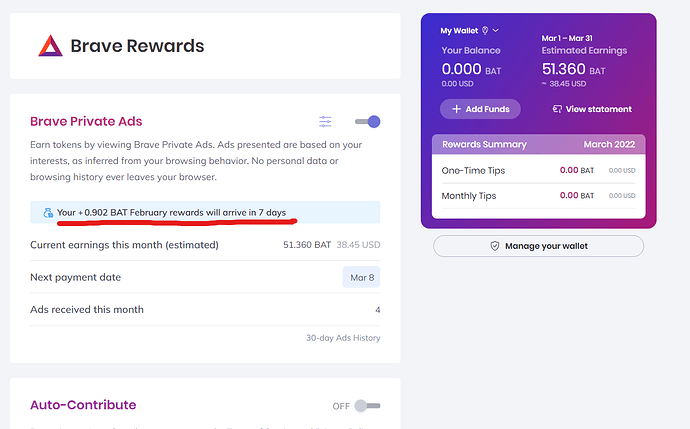 What the hell is wrong with brave ??? Seriously there is a difference of damn 51 Bats !!! in the “Estimated earnings” and the “actual payment in process”. The rest ‘51 BATS’ have been transferred to the ‘March Estimated earnings’ , I really don’t understand what is happening here ?
This is completely unacceptable Brave Team. I want an answer ASAP!

Issue with brave rewards. Some of the earnings were passed onto the next month
Brave no longer gives rewards
Problem with the calculation of the Brave payment for the month of February
Half of my Brave Rewards are missing!
Is Brave robbing us?
F4LCON9000 March 1, 2022, 5:23am #2

i also have a similar issue with the bat being transferred to next month but its not on the same scale as yours lmao. but i want to ask you. how did you end up with $52 in rewards? i get a max of 3 dollars after using brave for a whole month. am i missing out on something?

but i want to ask you. how did you end up with $52 in rewards? i get a max of 3 dollars after using brave for a whole month.

Also have this issue, a little under half of my Feb earnings got moved to March as well.

I wonder if it has anything to do with the dip in value of BAT. It took a nose dive in 2022 and it has been fluctuating ever since. Still hasn’t gotten back up to the value it was before New Years.

Hii, how did you earn this much bat can you explain please

how did you earn this much bat can you explain please

By trying to cheat the system, of course. But it won’t help. Brave officials might want to put some light in here.

I have the same problem. Almost half of my earnings is moved to March. This is really irritating.

Same problem and i qant an answer

I have the same problem

I think everyone is having the same experience.

Ok, no comment on the 50+ BAT as not sure what’s going on there. There’s no way for it to have been able to be earned in the month and if it was existing from prior months, it should have paid (claimed) out and not be listed in estimated earnings. So I’m definitely confused here and that’s something that you’ll need to definitely be in touch with @steeven and @Mattches to resolve.

i also have a similar issue

Yes, it seems that this is an issue for the month. When I first saw someone mentioned, it was a small amount that rolled over and I expected it was the usual rollover from when it had some pending ads that weren’t processed.

However, due to the amount of BAT and people having the problem, it seems to be something a bit more. I’m not sure if it’s an issue with campaigns that started in February or if it’s something else.

What I have shared elsewhere is that I’ve been through something before and Brave handled it. The good news is BAT hasn’t vanished or anything. If this is anything like 2 years ago, it’ll get resolved. Btw, you can see where I shared that at the post below.

that’s something that you’ll need to definitely be in touch with @steeven and @Mattches to resolve.

Okay thanks, I’ll try asking them for help.

@brian can you help us out?

Same happened with my BAT. I have brave on Pc, laptop and mobile phone. On all 3 my bat is cut in half (one half will be paid out and other is for march)

@achintya26 please DM me your Wallet ID which can be found here - (found at brave://rewards-internals).

@vintersorg25 @y2k when a new month begins, the display value of the current earnings will reset, and you will now see a countdown that tells you when your BAT earnings over the previous month will be arriving (for example, “+0.02 BAT arriving in 5 days”).