Are the admins aware of the issue of February 2022 payout?

Hi, many of us are experiencing the issue of incomplete January payments. Personally, I received just 1/3 of my payment.

Are the admins aware of the issue? have they put in contact with some of you? have they solved or are they solving your issue?

They are aware of the issue. and are working on it.

How do you know it? Have they established contact with you? If so, what do they say?

We are currently in the process of retrying a number of payments that didn’t properly go through this month. You are likely included in this list. We do appreciate your patience and hope to have this process completed in the next couple of days. Thank you.

And we always have users commenting, such as What happened? January payout - #3 by akent22

Which lets you know staff works on it and is getting people paid.

Thanks, that’s all I wanted to know. You made my day!

only 1.502 bats are moved to payout and rest of my Feb month 0.500 bats are added in march ads estimated earnings

Yes, the estimated earnings is a rough estimate based on the amount of ads you were shown. When you reach the end of the payout period, not all of those ads have been processed on the server side. Not every ad you had seen was completely validated and processed yet. So any that hasn’t gone through that are shifted to be paid in your next payout period, such as what you are noticing.

Not every ad you had seen was completely validated and processed yet. So any that hasn’t gone through that are shifted to be paid in your next payout period, such as what you are noticing.

This is something new? I mean normally there isn’t that big difference like this month.

Understood, Thanks @Saoiray for explaining it in detail

Understood, Thanks @Saoiray for explaining it in detail

Yeah, just FYI, we’ll have to wait and see what’s up. At first was seeing smaller numbers, but I’m seeing it’s happening with mine and others for larger amounts now. 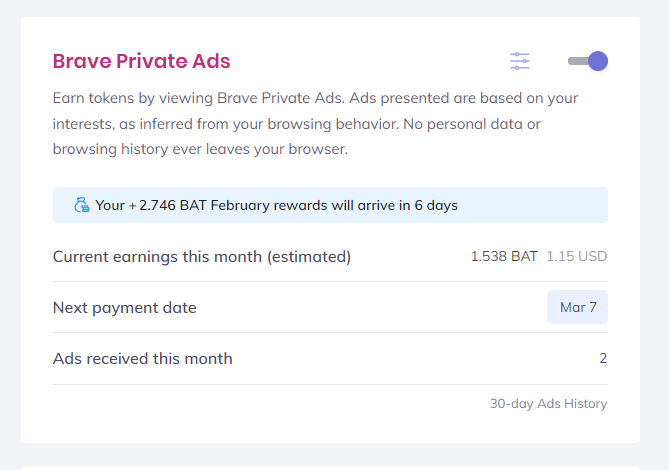 Similar things have happened in the past, though I can’t remember why. I can suggest all sorts of things, but I don’t want to say anything without being certain. The only thing I can say with absolute certainty is the system at least is still seeing our BAT and we will be getting it. Worst case scenario, it just stays stashed away and we get a bigger payout next month. Best case scenario, they may be able to give it a bump and have additional or full payments sent by time it all processes.

All I know is I’m not sweating it. I’ve been with Brave for 2 years now and they’ve always gotten payments to us.

Btw, just to go back to what I’m talking about and show you I’ve been through this before…

Last I looked in August, I had over 17 BAT earned. I’ve made sure to change settings so I could receive the maximum ads on a regular basis. As many others are referencing, it seems the system lost our BAT. I was highly disappointed to see Uphold and my Brave Browser tell me I only was paid 8 BAT. Any idea what’s going on and if you’re going to get it fixed? [Screenshot_20200905-200030_Brave]

Sadly that topic went unanswered, which was frustrating. My 17+ BAT (I think was actually 17 in the middle, total of 24 BAT by the end) estimated earnings only was said to be paying 8! Oh how mad I was.

I’d have to scroll through the forums to see what announcements they made on the cause back then, for September 2020 payments, BUT they did end up making a separate payment and things got resolved.

Hi @Saoiray , I appreciate your support. But this feature is new, maybe happened on the previous months and at that time was imperceptible but now it’s totally visible. But it’s kind of illogical, because we are said that our monthly earning for viewing the ads is what we will be paid. Brave has never said before that we will receive a part of it. I remember the days when the counter reached 0,000 BAT at 00 hours.

Sorry, but I think that it’s kind of uncertain. Because Brave will validate the ads that we already see. How do we know that all our ads will be validated in the right way? and why do they have to validate? I ask you this, beause I see every week multiple issues with Brave and honestly now I doubt a lot about their internal procedures and software.

A tiny proof of that is that they haven’t ended paying me my january earnigs, they just gave me 1/3 of them and they don’t respond any of the DMs.

We are more than aware of the issue.

The February payment period had several setbacks that resulted in many wallets not being properly paid out. We are still working to resolve this and all valid (not flagged) wallets will be fully paid out once we’ve fixed the issue.