There was a Multiple Profile Issue that thread was just closed.
This has also to do with multi profile but now this is about processes.
I think I just discovered that if profile one has extensions, even if profile 2 don’t have extensions, the extensions are still running in the background.
See picture.
The is only one TAB open and that’s to the extensions showing that there isn’t any.
The Task manager shoed all those processes and then I looked at the Brave Task Manager and I went, why are all those running?!
All this because in the past week, the game foe that I play, started to freeze for 5 sec and then it continues and I was looking at how Braver might be loaded down.
Thoughts? 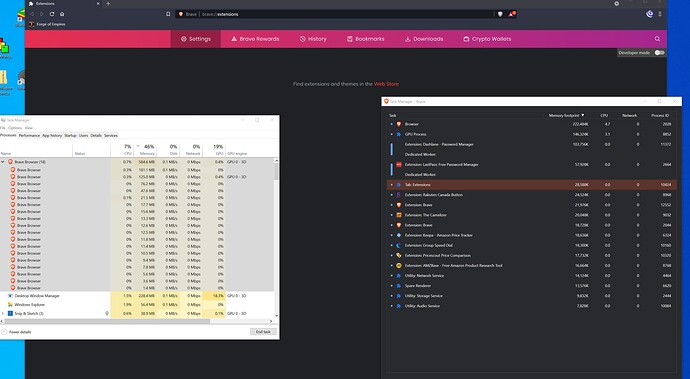 I hope someone will look into this as today after updating I saw the advertisement for “separated Brave stuff” and it seems it’s not. 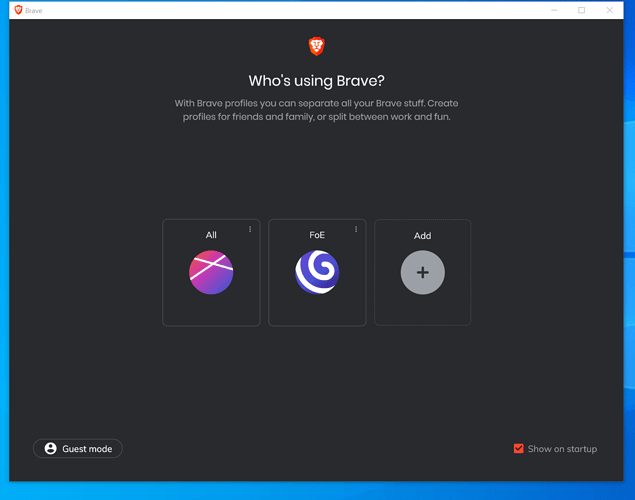 I saw the same after I updated to 1.29.76, it seems like the ‘Show on startup’ option is getting enabled for some users/systems. I use Brave on 3 of 4 computers; it happened on I think 3 of them but not on 1.

I selected a profile and unchecked the box and it doesn’t seem like any harm was done, but it was unexpected.

I don’t even know if I unchecked the box, but not coming up any more.
The problem of separation between profiles remain.

You may be correct but I can’t say for certain at the moment. I noticed something similar a week or so ago, which I didn’t expect.

In one of my profiles I installed Extensions Update Notifier. Even when I don’t have that profile open, and I’m using a different profile (which does NOT have that extension installed), I believe I got notifications about the other profile’s extensions getting updated. If so, then it would seem that those extensions are ‘running’ even when their profile isn’t open.

Not sure if this is good or bad if correct.

I can’t say with 100% certainty because I occasionally do use that profile and at the time I assumed I had a window open someplace. If it happens again I’ll try to track it down more precisely.

Maybe a good way to validate this (in addition to the process list) would be to set up a Test profile with 2 extensions in it: 1. the extension update notifier, and 2. some other misc. extension that has a habit of frequent updates. Any suggestions for the 2nd one?

My first picture clearly shows that the profile that is open in the background, has no extensions installed yet the extensions are running as the task view shows.
Weather ii this is a good or bad thing, for loading the computer down and in my case an extension causing a problem, but I still want to use it in one setup, I can image it being good in other case.
But if we are talking about separation, there doesn’t seem to be one.