NOTE: Any “one-liner” or topics requesting support or reporting bugs that do not make an effort to include as much of this information as possible will not be responded to. Repeatedly posting as such is grounds for banning._
Please try to adhere to this template when reporting bugs. If you think you don’t need to fill out every section in the template fill out as much of it as you can and please be as descriptive as possible when posting.
<---------Delete this line and everything above before posting---------->

Operating System and Brave Version(See the About Brave page in the main menu): 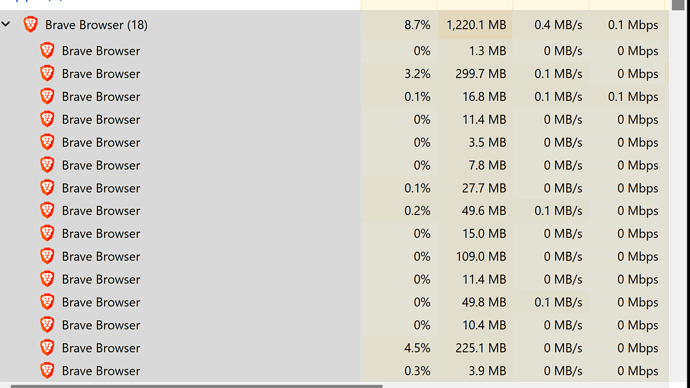 I’m running version v1.44.112 - why is the browser showing 18 windows open? It’s bottle necking the memory on my laptop and making it laggy and unresponsive in some instances. I only have 4 windows open, not 18. It also keeps changing, I’ve seen up to 20 windows open…

@Steersman7118
That’s how browsers are, if you used Brave’s task manager instead of the Windows task manager which only shows “brave Browser”, you will understand more why the browser has so many processes, the Browser can’t run in only 1 process because if one thing goes down they it takes everything down, also is a matter of security, isolating processes so they won’t affect others.

But everything is a process, tabs, extensions, Browser services like audio, gpu, etc.

But use ☰ → more tools → task manager, to see the processes and their name and see which ones are using more memory than others.

You need to know which process is what to know if it is a Browser memory leak, an extension, a tab of a website you are watching.
Memory hog compared to what? new web technologies are not memory friendly because the only way they can be fast is by using computer resources. Another browser will do the same, the ones that say “less memory” doesn’t exactly mean faster, because using less resources is not going to help anything.

You aren’t even showing the total of of memory of your computer 1,220MB can be a lot for a 4GB computer and be nothing to a 32GB one.

But the reality is that Memory not used is memory wasted, and memory is not going to slow down your computer unless you have a bad memory, only the CPU usage can interfere with the browser, like if you are doing something using CPU 100% it will obviously bring down everything, but not with Memory.
Memory is not like CPU, and the only way memory usage can cause trouble is if it hits 90%+ memory usage and then it starts using the disk, and if you have the old HDD then it will be impossible for your computer to recover, if you have a SSD, it will be a maybe, but not before that. Before that you are using memory which is meant to be filled by the system.

That’s how things are in 2022, and web technologies and developers won’t make it better, when even the simplest recipe websites will use a lot of memory for many reasons, but it is because of all the CSS, JS and stuff that has to be in memory in order to make it fast browsing, fancy animations and everything, and the the tab and the GPU service will use high memory.

@CerealLover
And I am sorry, but you should giving your “turn hardware acceleration” advice, it’s not the first time, and you don’t even try to explain things or understand the issue, because you don’t know the PC, specs or even the processes causing the issue, you are not helping anything by repeating the same thing over and over again.
And even if it was the GPU… then the person has to troubleshoot that, GPU acceleration is needed for a reason, and a 2015+ GPU should handle it perfectly fine today.

Nowdays a CPU does most the job for browsing taks. GPU will automatically start if needed.
I think you talk too much.