since July some regions are no longer for the list to recieved rewards inuphold wallet Nevertheless I’ve been recieving rewards, suppousedly from my creator account.
can any support assistant confirm this?
this is the capture from my uphold wallet 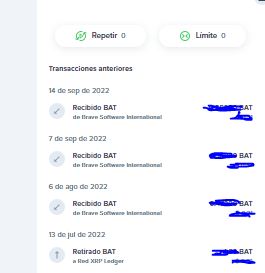 Nevertheless I’ve been recieving rewards, suppousedly from my creator account.

Yes, it is very much possible. If you have a Brave creators account and have it linked to Uphold. I guess that explains you still receding BATs in Uphold

Obviuslly.this is the only reason that I think why I am recieving rewards …from creator account, But that not explain the real situation about the Brave community published about the regions that out of the list
I am wating for an explanation from the asistant support

I am wating for an explanation from the asistant support

The regions were no longer supported because there were clashes with rules & regulations for each region. Also frauds were being detected. This was causing losses/costing lots of money to Brave. this is why they have temporarily stopped supporting some regions. But now they are back on track on getting those regions back. They added France back a few weeks ago and now they’re working on Brazil and India. They are working hard to get workable regions back by the end of the year.

What about TURKEY ? How long does it takes ?

No timeline, buddy. No one knows to be honest. It could be weeks/months/years or even never.
My opinion →
It should be solved by the end of this year or latest by next year.
They are working on getting regions back and have completed on 1 and near completion for the 2nd.

@ricardodn hi again! Just to be clear, the issue of regional support is only in regards to Rewards. Brave has limited Users from linking Rewards to Uphold or Gemini while they handle a bunch of things, some of which SmartyAadi already mentioned to you.

In terms of Creators, they haven’t had much issue and they were allowing that to continue. Part of the difference is that Creators is paid through tips whereas Creators is paid by the company. So there are more rules and regulations over it in comparison.

@SmartyAadi thank you so much for your answers!
@Saoiray I want to know if I can send me tips to my brave creator accounts, cause I am disconnected to uphold wallet and I suppose I am not breaking the rules
is it right?
thank you for your support

I can send me tips to my brave creator accounts

This is a gray area. It has been said in the past that it’s technically permitted, but then they also say it can still get you flagged because they see it as possibly happening because of fraud or to circumvent restrictions. Because of that, it’s generally discouraged and people just have to be aware that it could result in their Creators account getting suspended.

@Saoiray Ok, I wanted to be sure about this and all people affected by this situation take the advice you did
thanks a lot!!!

Partnership with Uphold was so terrible decision. Unbelievable.