When I initially bring up Brave browser on my openSuse Leap 15.2 linux system, there is a attempt to connect to the wireless connection as 2 popup windows which occur before the browser actually comes up must be responded to. Then occasionally during the browser session, additional attempts to connect to the wireless port occur again. This has become finally intolerable after several months of just clicking with the mouse to ignore the problem. How can I turn this off?

The browser is connected just fine through a wired link, capable of downloading 99 meg/sec, so no wireless connection is necessary and superfluous. 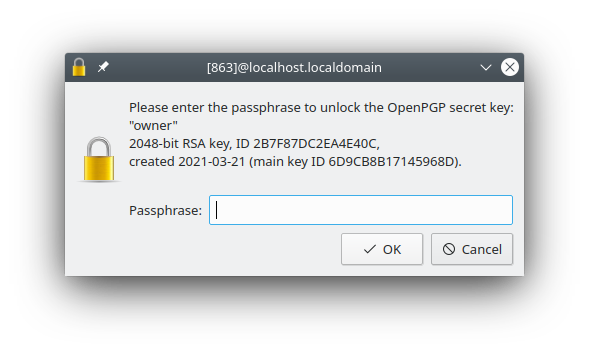 Hello – I think I understand your description of the problem, but I don’t understand how the screenshots relate to your Wi-Fi connection prompting. Is there another screen that ties them together or are these 2 separate problems?

I was actually just about to ask the same thing – I’ve also pinged our Linux team to see if this is already a known issue that I am not aware of.

I’ve never used the GPG option with the kdewallet, but the reason why this shows up with Brave is that Brave (and Chrome) use the kdewallet on KDE to safely store the encryption key used to store saved passwords, cookies, etc.

Normally, in the default configuration, the wallet is encrypted using a password derived from the user login password and is automatically unlocked at login time. If that default wallet is changed (for example, it seems to be using a GPG key instead in your setup), then the first application that accesses the wallet will trigger that prompt from KDE.

On my machine, running GNOME, the gnome-keyring wallet is not automatically unlocked so I normally get a prompt after starting either Gajim or Brave.

Reminds me of a couple other threads:

Using : Version 0.70.122 Chromium: 78.0.3904.87 (Official Build) (64-bit) On all flavors of desktop Linux, here is the warning “the password you use to log into your computer no longer matc hes that of your keyring”. It only happens when I launch Brave and always happens when I launch Brave. DDGing the internet brings up “solutions” but my concerns are: I do not want to in any way transmit my login pw to Chrom(e)(ium) and therefore Google (it seems it’s Chromium related)…unattributed po…

Folks, I don’t think this is the OP’s issue but I wanted to log something here as it is related and other people may come across this thread if they hit the Keyring issue. Funny enough, something similar just happened to me with Brave on a Fedora device. (I didn’t lose Internet or anything like that; I just got prompted about an unlocked keyring.) In my case it was because I started using biometrics (fingerprint) to unlock the device. Apparently, this does not unlock the GNOME Keyring. Mayb…

Note in the last one, the behavior was due to using biometric login; since the actual login password is not supplied, it is then not possible for it to also unlock the keyring.

Note there is also a workaround some other packages use, maybe worth considering for the Brave Linux package, although I’m not personally a fan of doing that.

Note there is also a workaround some other packages use, maybe worth considering for the Brave Linux package, although I’m not personally a fan of doing that.

Can you say more about this?

The only work-around that I can think of would be to not use the OS keyring and then store the passwords/cookies in plaintext on disk (or, more precisely, encrypted with a key that’s either hardcoded or unencrypted). That’s the behavior you get if you use the --password-store=basic command-line parameter, but I wouldn’t recommend it.

Hi @fmarier , yes, that’s exactly what I was referencing here as well as in the linked thread. I don’t like the idea for the same reasons. I feel a decision there would have to consider the balance between data protection, vs. user support/difficulties and potentially giving up on the app on Linux systems due to these struggles.

Perhaps a good balance would be an easy-to-find article on https://support.brave.com/ ?

I’d be willing to bet most of the users running into this issue fall into one of two camps; either they aren’t set up to auto-unlock the keyring, or, they are using some kind of non-passworded unlock (e.g., biometric) where the keyring can’t be auto-unlocked because the password was not supplied.