Brave sends me only a mini part of the Rewards!

im slowly getting tired really with the Brave Rewards since 8 months… I get a Mail today from Uphold after 8 months cause a transaction from Brave Rewards… But where is the Rest??? This is my 5th thread actually cause Brave Rewards… 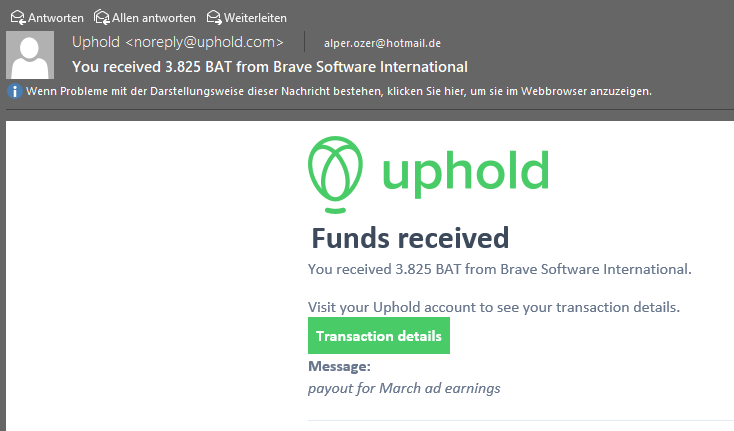 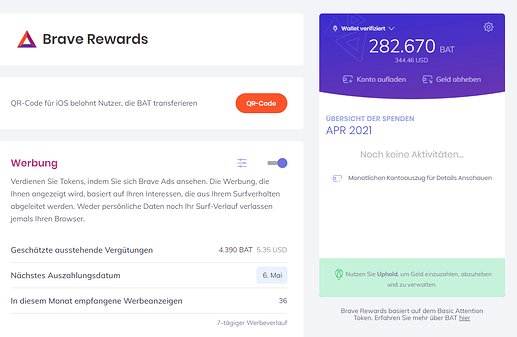 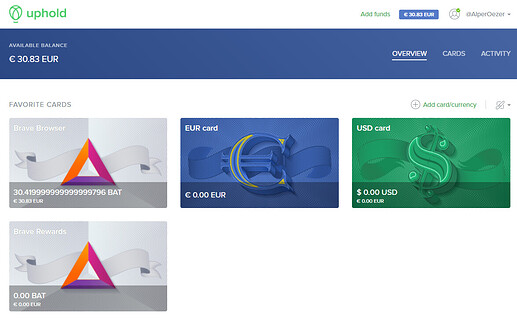 So April payout only for BAT earned from March 1-31. And most likely you only earned 3.825 BAT in March. While the estimation include BAT from April 1 - today too.

Adding to what @eljuno says, you can check before the 5th day of the month(the payout) how many ads you have seen in the actual month. You substract that from the estimated bats you will have, and that’s what you’ll recieve (that are the ads you watched from 1st of the past month to the last day)

And what is with the rest??? I have 250 Bats on my Browser but Brave dont send this you know???

I missed the mismatch balance from your Rewads wallet and Uphold account.

Most likely you encounter a known issue. See Fix for BAT not porting to Uphold wallet for more info

Forgot it @eljuno . Your fix dont work for me. I tried this 50 times. Nobody can help me since 8 months… Its pathetic really… Sorry…

I’m sorry for any inconveniences @AlperOzer .

It’s a known issue and the team is still workin on it.

Pasted from the thread above

This is still a known issue that’s being investigated. We appreciate your patience as we continue to work on a fix.

Wait a second, you’re using the old version of Uphold, @eljuno Is it possible that that could be a factor?

Same issue - I have nearly $100 in BAT in my browser. No new BAT issues from ads (though the balance keeps rolling over to the next month). Also, every time I try to withdraw to Uphold, I get a pop-up that an error has occurred.

I wonder if Brave is trying to keep these rewards from re-joining circulation?

Hi @AlperOzer
I have the same issue for several months. I have sent many DM’s to support team so still 228 BAT’s sitting on rewards panel as yours and it has never been transferred to Uphold. I think most of us got the same respond ‘’ as soon as the fix is implemented your BAT will port automatically. I appreciate your patience as we work to figure this out’’. I lost my hope to receive accumulated BAT after seeing same respond to everyone.

Look at it this way, if it wasn’t stuck in your wallet it’d be worth only 30 dollars

But it’s very weird, Im mean, I use the new wallet uphold version, and my balance in the blue part of rewards is exactly the same of uphold, If I trade it all to any other currency, it goes to 0 too, and if I trade again to bat, the blue part will have the same amount of bats I traded. I really think is the uphold version.

I just learned about the 4 browser limit, which may be my problem I have over 60 bat that are trapped. They only transfer to the first 4 browsers associated with uphold (everything else they just keep?), which is fine, I guess, but they should be more transparent about this and not show me ads then on my other browsers in my opinion because basically then they are profiting off ads without needing to pay out in that case. I don’t even know which browsers they are paying out on in my case because there is no way to see this as far as I know.

Well, it don’t bother to me at all, but thanks for your reply.