Why does Brave use more RAM than Chrome?

I’ve been told Brave is a great browser (besides for privacy reasons) because it uses less memory than the hog that is Chrome.

However, after testing with the exact same tabs and extensions, hardware acceleration & rewards turned off and even private windows, Brave is consistently using more RAM than Chrome. Even in the task manager, just the base browser uses 270MB (I’m sure some of it is shields but that’s over double of Chrome). Why? Is it only the mobile version that uses less RAM overall but not the desktop version?

Aside from privacy, if I’m looking to use less memory, why would I use Brave over Chrome with an adblocker on it? I’d like a more lightweight Chromium browser (since there are extensions I like), but so far this isn’t doing it.

Is there any other possible thing I’m missing that would/does make Brave use less memory than Chrome?

Why is brave so much bloated and slow compared to other chromium browser?
Number of Tabs allowed
sampson July 14, 2021, 8:49pm #2

Great question, @shmuga9! There are a few things to consider here.

Currently, Brave (the application) uses more baseline memory than Chrome. What I mean by this is if you are engaging in light usage, Brave is likely to use a bit more. We’re working on identifying areas wherein memory use can be further reduced.

Where Brave begins to shine is when you are engaging in medium-to-heavy usage of the browser, with several tabs and web-apps opened. Brave, by default, blocks third-party ads and trackers, which accounts for a sizeable amount of memory on most popular websites. As a result, tabs tend to be lighter in Brave.

I just took a quick look on my machine at a fresh profile of Brave and Chrome, and Chrome was using ~160MB with a single tab opened (brave.com). Brave was using ~235MB for the same tab. As you suggested, Brave’s built-in security and privacy features do indeed account for some of this different. 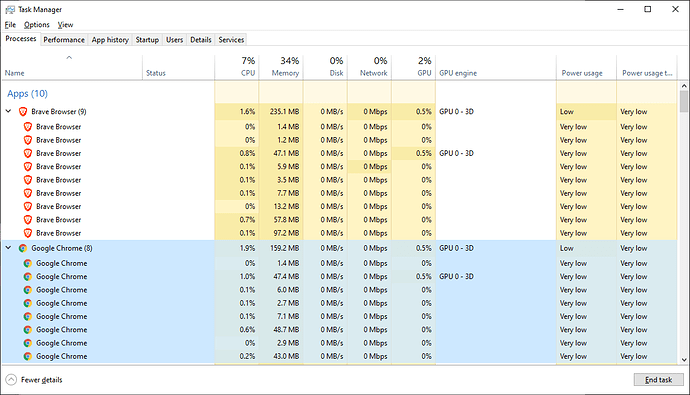 I then opened more tabs (brave.com, cnn.com, tmz Google search, twitter.com, and youtube.com), and compared the two again. With just a few tabs opened, Brave was using ~564MB while Chrome used ~708MB. You can imagine the difference between Brave and Chrome for those who have half a dozen to a few dozen tabs opened. 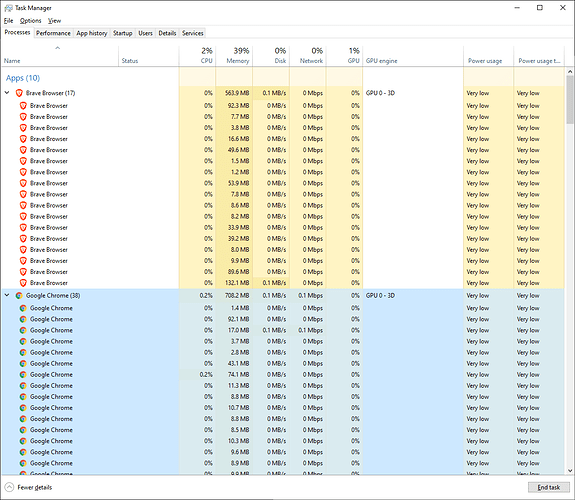 Once you install an extension to handle blocking in Chrome, you have to toss in the memory associated with that extension and its background process (this is accounted for already in Brave’s numbers).

Regarding your question of Why not Chrome with an Ad-blocker extension? It’s important to note that Brave’s content-blocking abilities aren’t derived from the extension APIs offered by Chromium. Extension authors are at Google’s mercy when it comes to what is possible with their extensions; search for the uBlock Origin and Manifest v3 story for an example.

I hope this response helps; if there’s anything further we can cover, please do not hesitate to reach out and ask. We’re always happy to chat!

16 Likes
High CPU usage in Brave when watching youtube videos
How do i make brave not use so many processes
Brave has become unbearably slow
shmuga9 July 14, 2021, 9:42pm #3

Thanks for the quick response and insight!

I tested that setup you used and got basically the same results. Although I’m curious, a new private window (with those tabs) used about 80MB more than the guest window (which is also private). Curious, why would there be a difference and if they’re both private, wouldn’t having both be redundant?

After seeing those results, I thought perhaps the set of tabs I tested with wasn’t representative. So I tested a different set of pages and got this result. 1.1 GB fewer than Chrome which is a huge difference, so I’ll stick with it. Although I’m also curious here, why are there other smaller seperate entries of Brave listed rather than being included into one listing? 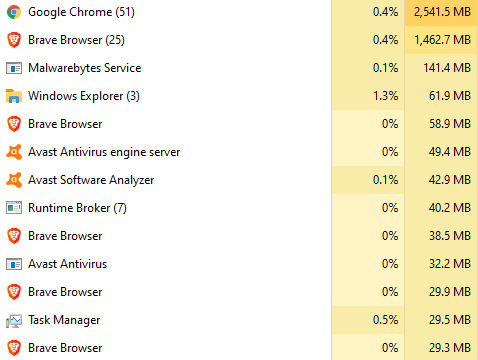 Thanks for your help!

Apologies for the delayed response here. I’ll have to take a closer look at memory management between Private Windows and Guest Windows. Regarding your second question though, the small entries are sub-processes belonging to the browser itself. These are usually extensions, tabs, components, and other background-processes. If you have 5 tabs opened, you’ll usually have 6+ processes running (5 for 5 tabs, 1 for the app, and potentially more depending on extensions, etc.). This multi-process architecture is pretty standard in browsers today. If one process (e.g. a tab) crashes, it doesn’t bring the entire browser down. I hope this helps!

Not only I did appreciate this talk and the deep, clear and simple answer, showing a rare engagement, but this encouraged me to… encourage you good developers (who I will never thank too much!) to open a kind of e-mail bulletin about news for us humble users for how to avoid to slow down browsing and CPU usage.
Yes… more than the memory, what I’d like to minimise is the pages loading time and switching between tabs delay, sure that, more than asking Brave to be quicker and more efficient, the performances would be increased by us… AVOIDING TO REDUCE THEM for our ignorance and ‘beginners mistakes’.
Once again THANKS!

This increased usage also seems to carry over to CPU usage.
Chrome/edge with same extensions use about 10-15 CPU when using youtube.
Brave uses about 60-70%. Tried disabling HW too… I

Disabling Hardware Acceleration should increase CPU usage (since HW utilizes the GPU instead). That said, please my earlier answer (from 16 days prior to the time of this writing) for more insights on how best to compare memory/resource utilization between Brave and Chrome (and Edge). There are cases where Chrome (and presumably Edge) will perform better, but this is usually limited to light usage of the browser, and not moderate-to-heavy usage.

If you notice considerable CPU use, check out ☰ › More Tools › Task Manager in Brave to see which process is responsible. You can hide/show columns in that UI to gain additional insights. If you have any questions or feedback, we’re always happy to chat!

I do not know if video playback is light usage or not but i’m pretty sure 55% CPU usage is not low.
I’ve disabled the adblocking extensions and ghostery on brave which helped a little.
After that, the CPU usage dropped to 50% but that’s it. On most websites, video playback causes severe heating even now.
Nowadays, i just startup edge just to watch videos and then use brave for light browsing.
I’ve also reenabled HW acceleration now.