Stop the Fox(Murdoch)News on the front page!

defaulting to criminals and fascists at newscorp does NOTHING to promote Brave as a non-spying HONEST browser! who authorized this move at Brave? NY Post is a lying criminal FOX/Murdoch asset which supported all kinds of spying in Europe including Murdoch bribing police to use their eaves dropping powers on anyone who wasn’t a fascist (AKA moderates, liberals). the same was going on in USA but USA republicans shut down any investigations. the same republicans would have shut down all Jan 6 Coup investigations if they controlled congress and we would have never found out of the Coup. that’s the NY Post news Brave has chosen to reflect the integrity of Brave. ???

What are your favorite news sites?

By the way, you can customize your Brave News feeds … just put on the ones you like AND put off the ones you don’t like … easy enough.

How about just not reading the articles you aren’t interested in instead of posting a political rant?

Besides selecting the sites you want in Brave News Sources, you can also add your own. Love this feature. I only have one site for now but I had several others at one time. The “why I don’t now” is a whole other story but basically user error and messing with things I should have just left alone.

Posting a Help Center topic that will help if you decide to add or remove news sources.

How do I use Brave News?

The Brave News reader is accessible below the new tab page and is delivered anonymously to the user’s browser via Brave’s new private content delivery network (CDN). Please see our official blog po...

If he did that then he couldn’t post a political rant.

OP is probably a Troll. Typing this nonsnse for trolling/humour/fun. All his previous topics/replies are in similar way.

Even for a ‘political rant’ it is too unhinged.

I don’t believe he is a troll, just a pretty ignorant person, with not much of a brain who thinks there are good politicians and good journalist and bad ones, and the ‘opposition’ is the evil one, but apparently it is like a cult, they can’t see both are even own by the same people, and they probably don’t even understand the simplest fact: Divide and Conquer, because they are too brainwashed to even understand how this “right vs left” game is just a manipulation, a game to make them believe whatever THEY want you to believe.

The worst is how these clowns can turn news sources off, they can choose which whatever garbage news to read and get brainwashed with, but they still come here and complain about why one is not removed, because they are the only bad side in his brainwashed mind.

I mean, look at his post, it was totally crafted by one obvious side news outlet, and the person is so gullible and dumb that he probably believe he is being told 100% the truth and only the truth by that side, so the other is the the true evil one. It’s actually laughable how humans pretend and live a fantasy life in their mind where they are on “the right side of history”, but obviously they can’t see how ignorant and brainwashed they are, when they believe one side is better than the other and one side wants the best and 100% truth; and it is not about money or power, nah, humans don’t seek that, it is about love and truth and honesty and holding hands and singing kumbaya so the other side must be an obstacle for that, because the only truth is on their side of the news or politicians or whatever their cult like mentality works and nothing else matters.

Censorship because “I believe I don’t like it, because my side tells me the other one is the evil one” (don’t tell him they are all own by the same people and it is just an illusion of ‘different sides’) rather than “I will be smart and just remove it if I don’t care about it”… that shows their intelligence level, it is not even about being extremist anarchist “remove all news” which would have been still bad because you don’t need to use the news, but at least that would have been more consistent approach of evil vs good.
Like in my opinion since Brave news has ads and it is opt-in, to me, only people with mental problems will enable them and waste time reading news that have shown over and over again how they lie and they don’t even try to tell you a little bit of truth, it is all a manipulation game, and people fall for the ‘emotion’ manipulation game they use on people to achieve their goals of brainwashing.
They same news outlets who use all those manipulation and hypnotism techniques are the same ones who get paid by government or pharma or politicians or whatever other industry to push news to brainwash and create a reaction from people, people don’t even check if the news can be real or even make sense, it’s like they are so deep in the brainwashing that apparently humans, but especially these humans that believe they are so smart when they read news, with their glasses and news paper and drinking coffee, don’t use their brain to tell the BS when news outlets literally push 2+2=5 and they are so gullible they don’t question it a second.

Any sort of extraneous information in the new tab page slows things down a bit. Turn off the “news” feature entirely and bookmark your favorite fascists the old fashioned way.

For illustration purposes only, your fascists may vary. 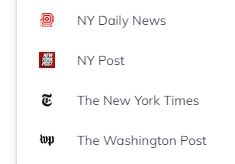 I smell a far left extremist here with that less than factual rant but you have noone to blame but yourself for not looking in your news feed settings and selecting sources you like and eliminating those you don’t.
But you know when has a leftist ever let facts stop them from blaming others and name calling.