RT was a Russian based news company. They shut down their news service by dismissing their staff, closed US based offices, etc. This wasn’t a Brave Browser issue.

Come on, Emi, you must be a Russian agent.

Agreed, a better explanation would be great and there is no doubt that what Eich says in his Tweet (don’t have Twitter myself, either) makes sense. It’s censorship galore all over the world right now and censorship is getting way out of control, especially in supposed free speech countries. Punishment will be passed out if you don’t follow the power structure directives, which is scary that people don’t see this. I personally couldn’t care less about RT, but am an absolutist pretty much on censorship, like I think Brave is. As Niemoller said, “first they came for…”. Good day.

Users can opt to add RT (or any other source that publishes a feed) to Brave News by adding the RSS feed URL in the “Your Sources” section of Brave News’ settings. Given the sanctions announced by the EU and individually by European countries (where we have a lot of Brave News users), we felt this was the best way for our user-first platform to proceed without censoring content, or otherwise preventing users from adding their preferred feeds.

How does the sanctions of EU affect Brave isn’t a private company? You guys would face criminal consequences or shut down if didn’t adopt that? I’m against all forms of censorship and have to say I’m really disapointed on Brave and DuckDuckGo for adopting this.

@Emi and @Onyx13 and @eduardovi

You may want to read links and all below.

It’s a wide-ranging sanction on the distribution of RT and Sputnik and their subsidiaries* — covering not just traditional broadcast channels (like satellite TV) but also online platforms and apps, as we reported earlier.

This also means internet providers are expected to take proactive steps to ensure content from RT and Sputnik does not appear on their platforms, EU official said.
So, basically, just banning official channels may not be enough — if other users/accounts upload sanctioned content, social media and other tech platforms may be expected to take further measures to prevent the ban from being circumvented.

In addition to social media networks and video streaming services, EU officials said that in principle ISPs are also covered. 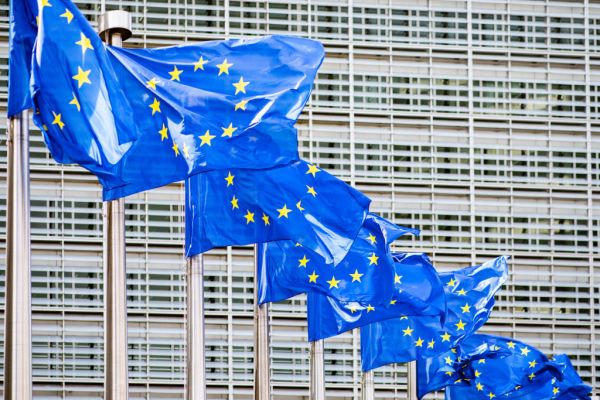 The EU’s ban on Russia Today (RT) and Sputnik has just gone into effect after the bloc formally adopted the sanctions, meaning media regulators are now expected to monitor compliance, with the risk of fines being levied by national watchdogs across... 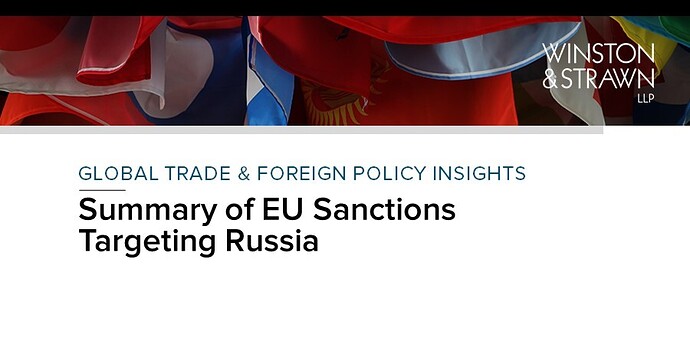 Updated as of March 10, 2022. A previous version of this briefing was published on March 2, 2022. Since Russia’s recognition of the non-government-controlled areas of Donetsk and Luhansk, and the subs...

And yes, countries could come after them or then prohibit access to sites or browsers in those regions. Right now, RT is actually fighting against it. You can read some at https://www.broadbandtvnews.com/2022/03/09/rt-takes-eu-ban-to-europes-top-court/

But if places aren’t careful, there’s plenty of fines and other issues. Keep in mind legalities always matter and if they don’t do the best they can within that, they get shut down.

Using a New Private Window, and with javascripts blocked, and cross-site cookies blocked, I had Brave Browser go to:

The web page displays well. But I selected an article link:

and chose to open that in a New Private Window (and another attempt, in a New Tab) . . . and the result: 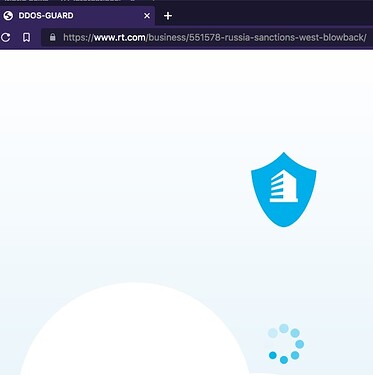 Incredible material. A “must read”, IMHO, before using any of the links at RT.com/news. 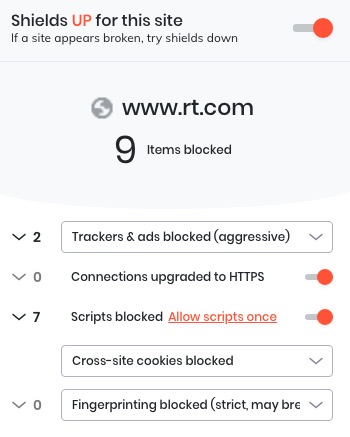 Note that I am not affiliated with any side and strictly speaking from a non-partisan 3rd party side.

1.) I get it that brave needs to remove RT from the default news feed customization settings bar due to the recent EU law/ruling. The current workaround is to add the missing RT by RSS feed by xml/atom file.

3.) IMO, brave should add RT again or keep as it was before for non-EU brave browsers.

…if you can’t keep RT… how can users trust that you will not listen to governments when they say “give us your user’s data”??

I think the difference here is that Brave isn’t collecting User data. This is part of why they aren’t doing KYC/AML themselves and handling the BAT. This is passed on to Uphold/Gemini to have to do. And, sadly, those places are sending everything they get in terms of our BAT earnings and all over to the government. But at least that’s all they get is knowing who is getting BAT and how much.

Everything else is encrypted and not being stored or tracked anywhere. So what user data could they share?

Brave should fight the system and not bend the knee and obey to whatever some clowns from any government say.

It would be nice if the world could do that. But all that would happen in the end is that the businesses would be shut down, they’d be arrested/fined, etc. That said, it’s important to realize that they didn’t completely back down. By giving users the ability to add to RSS and all, they still made it possible for users to access the information instead of completely censoring it as others are doing. They just had to add an extra layer to it so they could protect themselves and say it’s essentially beyond their control.

So, it was not hard to think maybe Brave was flipflopping in their promises to be against censorship and against Big tech and Silicon Valley.

These digital internet wars have to be fought and won doesn’t matter the cost, I mean, it doesn’t mean much for Brendan to speak nicely about Brave and Brave search and anti-big tech and censorship that when you have something to fight for, you don’t do much and Brave just obeys the orders like everyone else to ‘ avoid trouble ’, but then as users we shall question: what else will you do to avoid trouble tomorrow and any other day in the next years?

Yeah, it happens. Let’s face it, Brave is in a long war to change how everything is done. Sometimes they will have to retreat from a certain battle so they can live to fight another day. There will also be times that they may horribly lose some of these fights. But what’s important is how we band together to make sure that the future we want with things like Brave might come through in the end.

But like I said, at least a message to explain and inform users about how you want to avoid issues would have been better than silence and ‘let users think whatever they want about our decision’

Yeah, Brave in general needs to make a LOT of improvements in their communication. There’s a lot of silence where it would be beneficial to advise users of issues or future plans. Yet I have been using Brave for a few years now and have liked everything they are doing. Sometimes their silence is for good cause. I mean, if they are being told they need to censor things and they create a backdoor for us to use, the last thing they’d want to do is loudly announce it to the world. Otherwise those same places demanding censorship would ask those backdoors to be sealed away as well.

Wars are long and often done in secret. I mean, would you rather run at your enemy in an open field holding just a sword or would you like to sneak in on them in the dark of night with advanced weaponry that will let you go undetected? Is it better to tell your enemy your plan or to move without revealing too much? That’s kind of the interesting types of scenarios we’re dealing with here.

but that’s the way You and Brave team make it seem.

Just one thing to point out, I’m not affiliated with Brave. I’m just a normal user who has spent a lot of time helping people. So yeah, they acknowledged that and gave the badge which lets people say Community Ninja. But that doesn’t mean anything I say is approved by them or represents their stance. I am myself, that’s all.

Honestly, there’s a lot to address on the things you’ve said. You make some excellent points but then there’s others that I believe might be misunderstandings. Think back to things like World War II and the Holocaust. People who openly spoke up to the government were killed or severely punished. What you had was people who would outwardly pretend they were complying while hiding people in their homes and try to help them escape to safety.

What I see in your comments is that you’re upset because you think businesses should fight against government. According to you, they should boast and be as loud as they can while refusing to comply with all laws and regulations. But let me ask you in all sincerity, what do you think would happen if they did that?

And like the Holocaust example, even though it’s an extreme comparison, Brave is outwardly “complying.” But they are also giving the option to better access. So if we look at things like the quote you gave about Goggles. Did you notice how they said Brave’s database won’t change? Governments with different rules and regulations can try to re-sort (censor) it for that area, but then all the user has to do is use VPN (which Brave is working on making available on all devices) to circumvent that. Then you wouldn’t be FORCED into that censorship.

Don’t forget, societies all around the world have passed on the wisdom in how to properly fight and the danger of sticking out.

The nail that sticks out gets hammered down.

I think a lot of times we also confuse the American saying of The squeaky wheel gets the grease to mean something that it doesn’t.

Each one is saying when you stand apart, you’ll be handled. I mean, even with the wheel and the grease. It’s not saying the problem is resolved, only that they took the action needed to silence you. So your noise will get action, but not necessarily the action you want.

Bravesearch indexes the Sputnik and RT France websites and this is a good thing. The other search engines have bowed to the demands of the states for whom the plurality of information represents a danger (but for whom?).
Critical thinking cannot be done without contradiction.
Today it is censorship against Russia and its allies, tomorrow it will be whose turn?
Who can claim the right to determine what is right and what is not?
Isn’t this a question of the dictatorship of thought?

Isn’t the news feed a third party thing, not a native brave thing?

You can still view RT at will. 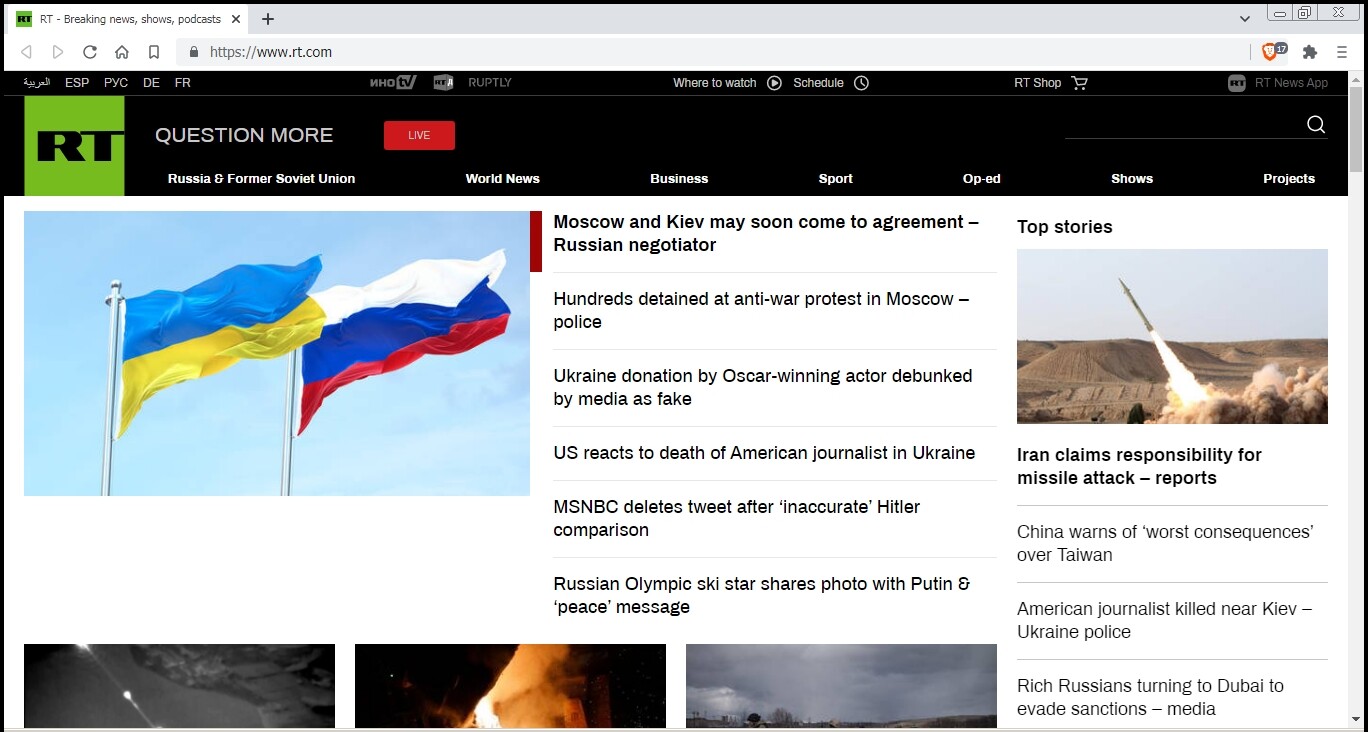 I’m in the USA, have AT&T (phone company) for an ISP, and not using a VPN for this screenshot. So no sneakiness required for me to see that.

Is there a update on this, as my solution seems pretty reasonable? Brave should clarify the reason of RT (Russia Today) removal from News Feed Sources - #9 by chh_68

As far as I know, brave knows from which country/region a browser is being downloaded via IP. That is how Bitflyer is available for Japanese users. The default langauge as per my understanding is also set based on IP.

Or when Brave news is turned On for the first time, it surely connects to a brave domain to get the material. At that time, it can just see if the IP requesting the data is from Eu or non-eu and send the relevant data.