Possible dupe of brave have i been infected?

For more information, or to report interesting/incorrect findings, contact us - bot@tines.io

it looks and acts exactly like brave i have put in passwords and now im starting to wonder if i should unninstall this version and change alot of passwords thanks for your help
everything checks out in green on virus total though. And on another note https://www.reddit.com/r/brave_browser/comments/nwzlwi/google_chromes_top_ad_for_brave_browser_is_a_scam/ not sure what this means

I checked out the file, it seems to be the original browser.

So there is nothing to be worried about.

@Bob4678 please remove the direct link from the description of your thread as more users might download the file. It’s not guaranteed that it’s a malware or anything, but the fact VirusTotal is alerting of the possibility is worrying.

Possibly a similar case as the one described in the thread below.

CC: @Mattches and @sampson as the case might have to be reported to Google, once again.

when i ran virus total it came back green but that is alarming to me should i unninstall this version of brave? and change my passwords

What I can tell for certain is that downloading Brave from websites different than https://brave.com/ is wrong.

If it’s not an issue for you, uninstall the suspicious version completely, download Brave from https://brave.com/, and then for self calmness change your passwords.

However, once again, I can’t tell whether the version you installed is malicious.

I downloaded the file from the site mentioned in the Reddit link given above and it was the Brave Installer exe file.

It was called BraveInstallerABC123.exe [ABC indicating random alphabets and 123 indicating random numbers] and when I ran the VirusTotal test, it showed me that it is the same file as the one we get from brave.com. Which indicates that the file is legit and even the website.

I don’t know which file got downloaded for him since, VirusTotal is saying its the normal file for me.

This is the link he was talking about: https://try.bravesoftware.com/

Do check the file for yourself if you are interested.

And I don’t know how “tines_bot” is linked to this file since I can’t find it anywhere in that site. 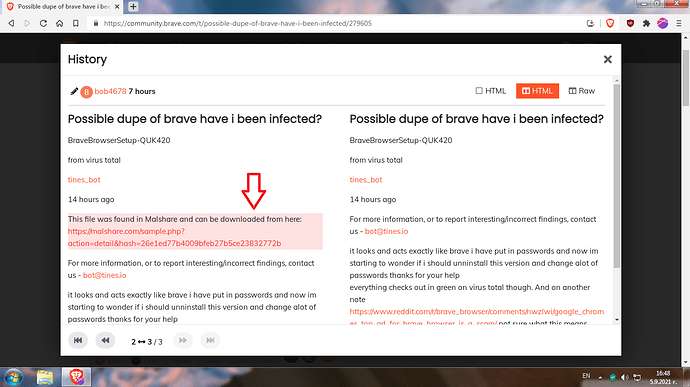 I didn’t check the link provided on Reddit since a Support team member claims that website (the one you mentioned) is linked to Brave.

In the first line he mentions “BraveBrowserSetup-QUK420” which is a legit insaller.

But then on the second line he write ‘tines_bot’ which I can’t relate to anything… Is what I am trying to say actually.

first of all id like to say im very grateful for all of your time .ive started changeing passwords should i change my wifi to while im at it? im hard wired into a router? i tryed to log in with my wifi psw but it could not connect so i hard wired in im sorry, im not very tech savy

Based on OP’s thread’s description, I understood OP downloaded Brave from Malshare.

first of all id like to say im very grateful for all of your time .ive started changeing passwords should i change my wifi to while im at it? im hard wired into a router? i tryed to log in with my wifi psw but it could not connect so i hard wired in im sorry, im not very tech savy

Sure, change the Wi-Fi password if that isn’t an issue for you. It’s important to note that there is no evidence that you were infected with a malware or anything, don’t panic in advance. The fact VirusTotal is flagging the link you provided is worrying but it’s not a guarantee anything bad has entered your PC. I would run a scan with an anti-virus software to check whether anything has entered the system, too.

I think you don’t have to download other anti-virus software. Like I wrote a few times, there is no evidence that anything harmful has infected your system. The fact that the link you provided is flagged by a few security vendors is not okay, though.

it was not malshare that i downloaded it from

That is a real Brave file and not a malware.

I think you got confused with the tines_bot since its not present anywhere in that link.

the tines bot showed up,in the community section as soon as i uploaded the BraveBrowserSetup-QUK420 oddly the file size was 1.18 MB