One week of installation: No ads, possible bug

I installed Brave about a week ago, and since then no ads were shown. I did research (a lot) to understand what could be going wrong, and I found nothing.

I’m in Brazil, which is a supported country, the notifications on Brave is on (Windows), the focus assistant is off, I tried turning Rewards on and off, and yet no ads appear. I understand that ads do not necessarily need to show up, but no ads in about a week, when it’s clearly the main marketing point of this web browser, has to be a little bit disappointing (the only ads that appear are those in the new tab screen, but I found nothing about that and I just guessed you do not win rewards for viewing them).

And since yesterday, everytime I open Brave that little Rewards menu appears like this, despite being on everytime (opening the menu right after confirms that). 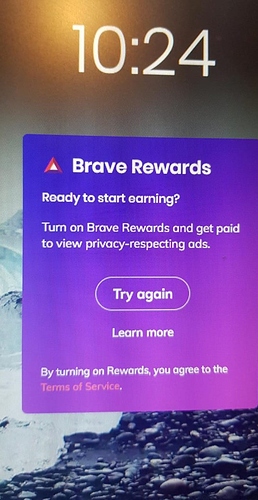 Has that already happened to anyone? Any clues on how to proceed? Or is it just the algorithm behind the ads that is slow to start showing them to me?

Obs: Not that is anything of my concern, but if I were the owners/developers of Brave I would make a reeeeeeally easy and explanatory page where everything is explained (and divulge it), because I had to go through a lot of pages to understand some things, and most of them I still don’t quite understand.

@GabrielPast,
Can you try going to https://www.bennish.net/web-notifications.html and forcing a desktop notification?

Afterwards, see if Ads begin to appear and/or if the browser is now listed in the Notifications & Actions list.

@Mattches Yeah I already did that, when I was searching to see what could be the problem I found out that Brave wasn’t appearing on that Notifications list, so somehow I got to this same site to force the notification to appear, then it appeared and I turned it on, but still no ads since.

@GabrielPast,
For the record, you do earn from allowing the NTP sponsored images to display.

Are you using a Windows 10 system? Additionally:

@Mattches well that’s weird, because I’ve been seeing these ads a lot and no rewards yet 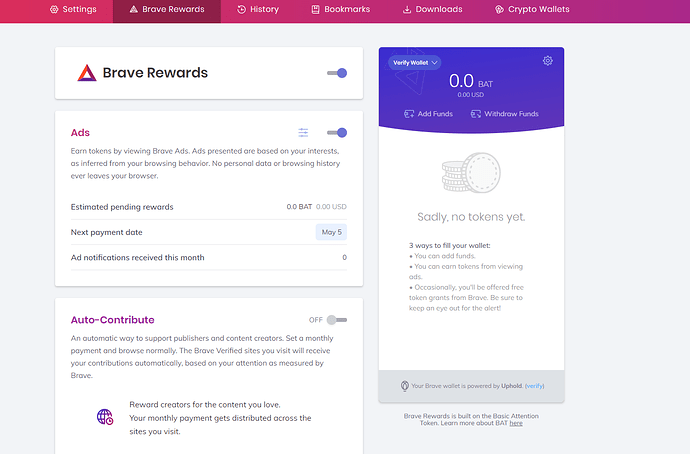 About the VPN, I didn’t even knew what that meant, so I guess I don’t have any. But this is the configurations menu just in case (it’s in portuguese). 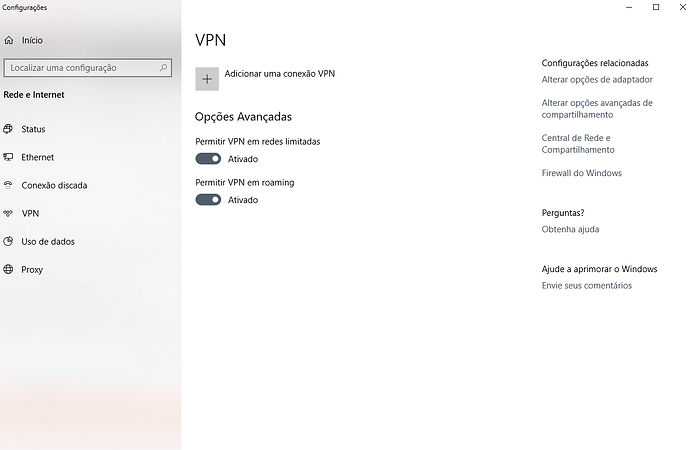 The extentions are just the ones that came with the browser, I just turned Skype off.

And I’m not using it on full screen mode. Hope this helps.

@GabrielPast,
Adobe/Skype are not included with Brave browser – just for future reference.

So in your Rewards settings, it appears that you’ve seen 0 ads – so when you say

can you be more specific to what Ads you’re referring to?

@Mattches oh so I guess they must have come when I imported the settings from Chrome, since it was by the same time I dowloaded Brave I thought they came with it.

And those ads that I was referring to were the ones that appear on a New Tab, those that like I said in the beginning, are the only ones that appear to me since I first started using. Like this one.

You said that you would earn for viewing them, but I’ve seen a whole lot of those this past week and my wallet remais empty.

@GabrielPast,
Payouts are made for Ads/Sponsored images on the 5th of every month – so in about a weeks time, you should see you balance increase

I live in brazil too, and have the same problem of this guy, i clicked in these links in brave tab, and it just don’t increase anything, i downloaded the latest version released

@Mattches Ok, so I will wait till the 5th and see if it increases. But regardless of that, shouldn’t it increase on “Estimated earnings so far this month”, or “Estimated pending rewards”?

And that still doesn’t explain why I haven’t been getting notifications ads. Could it be because the algorithm doesn’t find me a good fit to see them based on what I browse?

Good news! Just a minute ago appeared the first ad ever (about Brave community

) and instantly after I clicked the Rewards went up! 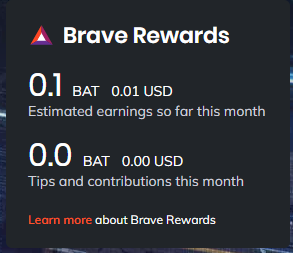 And while I was writing this, the second one showed up! I think that now the notifications ads are working just fine, the only matter that remains are the New Tab ads that didn’t add up to the Rewards amount.

I have the same problem since one week ago, i´m new at these… dont know what else can i do. i live in venezuela and i have windows 7. could that be my problem?

So, it’s been a week we were discussing in this topic, and since then the notifications ads seems to be working just fine. I don’t get to see a lot of them (were 5 in total last week) but from what I see it’s simply a matter of the ads not showing because I don’t match what would qualify someone to see them, and that’s fine.

The question I still have is about the New Tab Ads, that you said here and in some other topic I saw that would appear on the payment on 5th, but that was not what happened.
At first the wallet went to zero, but then I saw that were occurring some problems and waited, and now the wallet is back to normal. But the only thing that went in were the 0.3 BAT (0.05 USD) of the 5 notification ads I saw and were already estimated. So I wondered where would the New Tabs ads enter in this process? Right now it’s like they never existed, and I can’t seem to find anything more specific about it.

up…
situation still the same