No way to undo tab close on Android

When I close a tab, there is no way to bring it back. This has caused me data loss twice in two months now and if it happens again, I’ll switch back to chrome. The worst is, that this also happens when closing all tabs. I have only about 20 tabs open, but those are important. I can’t have to reopen them every couple of weeks, because I mistapped on the “close all tabs” button when I meant to push the “new private tab” button on the tab overview page.

I guess there should be a little “undo” button an the bottom of the screen, but it isn’t there. I’m on Android twelve, if that’s important.

This feature is already present. In the recording below, I’ve opened a new tab, closed it, then tapped the Undo option that appears at the bottom afterwards:

Well then it doesn’t work properly. I would have attached a video but this platform doesn’t allow it. I don’t have the button at the bottom.

Here is a link to the video.
https://photos.app.goo.gl/nj39tPu46tWUhaiT6

@t.animal Can you check that you have it updated? The current Brave doesn’t look like you showed in the video. The top of the current Brave browser has the tabs buttons on the bottom of the screen, not on the top. I’m wondering if you’re using a far outdated or unofficial version.

The play store doesn’t have any updates for me and I am running on a current android, too. The problem exists for a while, like I said this is the second time I’ve lost data, because I accidentally closed all my tabs at once.

The reason why the tabs button is at the top is that I don’t like it at the bottom* and I used the corresponding setting to disable it (official, nothing hacky, it’s right there in the setting group that’s called “Darstellung” in German, that’s the one above the new tab page settings group).

*because I have to hold my phone in a very clunky way, because they only make oversized phones these days and I’d have to balance it on my fingertips to reach the buttons, because I don’t have the hands of a giant.

@t.animal Ok. Well, I know I have it most recent on my iPhone 13 Pro Max and my Samsung Galaxy S9. For quite a while now, both have had the Undo pop up when closing tabs. I’m not aware of a setting to deactivate that either. I just was looking for it as I also had forgotten they put in a setting to let you change bar to bottom or top as desired.

I’ll try to ask now as I’m guessing it might be the big question coming up, could you share which version of Brave you’re using? It’s in Settings > About Brave

And just to show in a similar fashion as you showed yours…here’s me using my Android. You’ll see where I opened and closed tab couple times, then close multiple and was able to restore them all again. 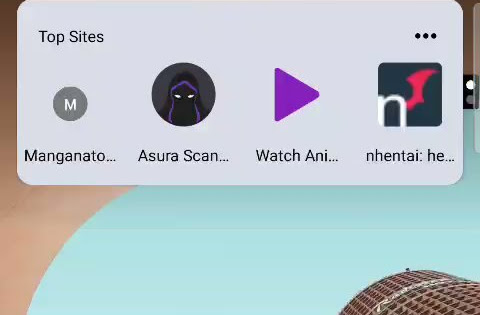 lol, funny how sharing that it gives a big zoomed in area here on the forum of the websites on “top sites.”: Guess let it be known I had been a big visitor of nhentai. Guess I should have edited that but it is what it is.

I don’t doubt that this works for some people. All I say is that this doesn’t work on my phone and that it is a catastrophic bug and directly violates one of the most fundamental UI principles “User control and freedom”

Ps: if you’re embarrassed I’d
suggest to remove the textual representation, because that makes it easily googleable.

I wouldn’t have noticed anyhow.

Oh, I hear you. So like you said, it’s the most recent of Brave so it is what it is. I guess part of me was hoping there was some sort of oversight and that was the issue. Guessing maybe coding difference in Android 12 or something. Anyway, it looks like Mattches is replying as I’m typing this now, so hopefully they have something in mind.

@t.animal,
Thank you for the information. I’ve reached out to the Android team for more information as I’m not sure what would be causing this. There is not setting in the browser that enables/disables this behavior and it should come by default.

Would you mind telling me what type of Android device you’re using when you see this behavior?

Thank you. I will reply back here when I have more information.

Galaxy Note 20 Ultra on Android 11 here. I’ve never had this issue. So it might be an Android 12 thing.

Are there any updates on this? I have done some debugging and found some additional information that probably helps pinpointing the issue pretty well. I have deleted all app data (this, of course, caused data loss again, most importantly I lost my wordle history

) and recorded my screen with a clean app. I noticed that it starts with accessibility features enabled, which led me to believe it has to do with Android accessibility features. Sure enough: disabling “KDE connect” makes the undo button magically appear! Unfortunately I really want those two apps to work, too.

Good to know. Hopefully @Mattches can relay it to people like @Serg and whoever might able to figure out coding. In the meanwhile, I’d reach out to KDE Connect to make them aware of its effects. I say that because it’s their thing interfering. I never know whether the primary responsibility on issues is with the other program/extension or if lies with the browser.