Description of the issue:
Hello!
This is my first time reporting an issue. I’ve been using brave browser for around six months without any issue. I’m a student and because of the current world status I’ve been taking virtual classes almost daily, using OBS as a virtual camera for video calls to use green screen. Yesterday i was trying to send a picture from whatsapp web, and I tried to take it from my laptop’s camera (not OBS virtual cam), and I noticed that no image input was getting to whatsapp to take the picture (screen was black). I checked in the camera icon in the search bar, and it showed that NDI (I use it occasionally to route video to/from Isadora, Resolume Arena and OBS itself) was set as the camera. When I tried to change it, it wouldn’t let me interact with the expandable bar where the other cameras where mean to appear, as if it where frozen or blocked. I went to brave://settings/content/camera to change the camera from there. I restarted brave and it still showed NDI as camera. I rebooted my laptop and the issue still persist. I uninstalled all virtual cameras I had (since the only physical one I have is my laptop’s) and finally I could take the pictures. I then proceed to reinstall NDI and OBS. OBS and the VirtualCam plugin didn’t change my main camera (but I still couldn’t really pick a camera source), but the moment I installed NDI I had the same issue. I uninstalled NDI but OBS Virtual Cam was set as default and I had to uninstall it again to set my laptop camera as main because I still couldn’t pick. I’ve used brave while simultaneously running OBS and NDI for months, and before this event I didn’t had any issue. I’ve tried to uninstall and reinstall all software related to the issued, but so far I had no luck.

Expected result:
Be able to choose which camera device I want to use in the icon that appears in the search bar, and have my laptop default camera as the site default since that’s what was specified on brave://settings/content/camera.

Actual Result:
Cannot choose camera device on the camera , and NDI (and OBS virtual cam when NDI is uninstalled) is set as default regardless of the camera chosen on brave://settings/content/camera.

I reckon that NDI setting itself as main camera may be an issue I should bring in another forum altogether, but I tried opening Whatsapp on Firefox and although NDI still appears as first option, I can pick which camera I want to use from the camera icon in the search bar.

I’m also able to pick a camera from sites that have such options in themselves, such as google meet. 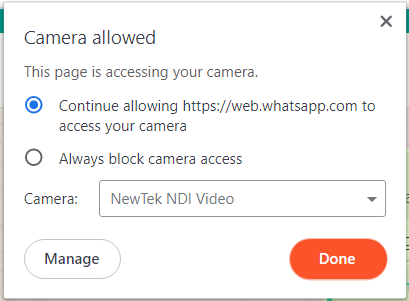 My camera settings at the very same time, showing I had already picked my laptop’s camera as the default camera 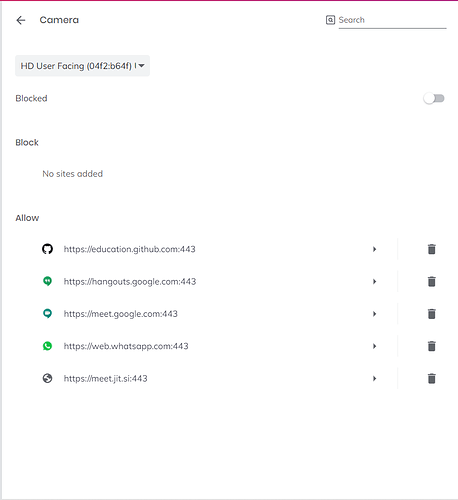 Camera after uninstalling NDI but keeping OBS VirtualCam plugin. Camera option still unchangeable. It says I should reload the page, but it still shows the same text after doing just that. 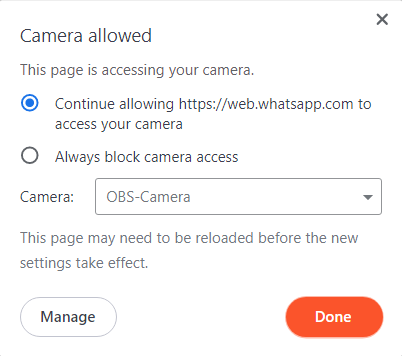 Mozilla Firefox Browser showing NDI as default camera, but letting me choose which camera I want to use.

@Milequim,
Thank you for the very detailed report – really appreciate it.
I’m going to ping some devs on this issue, but off the bat, can you try changing the Shields settings for whatsapp web in the Shields panel (lion icon in the address bar) so that the Fingerprinting protection is set to Allow all fingerprinting? The page should refresh after the change, then try and see if you’re able to select the desired camera option. 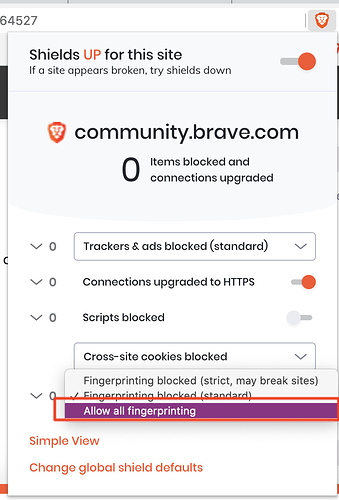 Thank you for answering!
I’ve just tried it. The page refreshed but the camera selection is still frozen 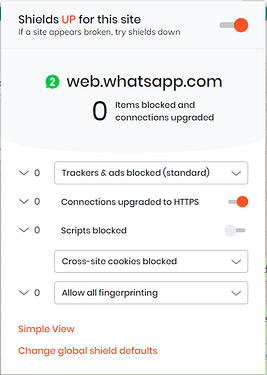 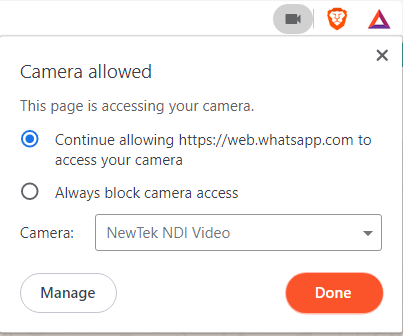 @Milequim,
Thank you for testing. Let me reach out to the team again and see if we can get some insight. Appreciate your patience.

I don’t have a whatsapp account, is there a way to replicate this. I have OBS installed, and VirtualCam plugin installed. @Milequim

Hmm Is there an easier way to replicate this? I’m a bit lost with OBS/VirtualCam/NDI.

I have this same problem only with Google Meet and Snap Camera.

Snap Camera is a desktop application that allows you to use Snapchat filters on a PC. On Windows (and presumably on MacOS) it works by opening your built-in camera and creating a virtual camera where it outputs the filtered image. So, on the camera list in my computer’s camera list I have “USB Live Camera” and “Snap Camera”.

Unfortunately, Brave defaults to using “USB Live Camera” which is not what I want, and no matter what I do, I cannot make Google Meet use “Snap Camera” on Brave. Even when I choose Snap Camera in Brave at Settings->Site and shield settings->Camera, and within the Google Meet UI at More Options->Settings->Video. It always tries to open “USB Live Camera” and if Snap Camera (the application) is already open, Google Meet will simply say “Camera Failed” because the camera is already in use.

This is not a problem in Chrome on the same computer. “USB Live Camera” is still the default camera, but I can easily switch to “Snap Camera” without any problem using the Google Meet UI.