Description of the issue:
(1) Passwords saved in Brave don’t appear after syncing to iPhone
(2) Pop-ups and other ads are appearing despite having Brave Shields up. If I turn off Scripts, then it breaks the sites where videos and images can’t load. With Scripts off and everything else on, it will have ads in new tabs and all on a regular basis.

Expected result would be:
(1) Everything would sync as it had been doing with my old Android and desktop. Be able to access my usernames and passwords at least
(2) For ads to be blocked, rather than seeing pop-ups every time I start to scroll down a site or click to start/pause/fast forward videos.

At this point in time, I’m having to resort to using Safari with AdBlock Pro. It’s not 100% efficient but it is working MUCH better than Brave is in its current state. I’d much rather have been able to log in, sync, and use the browser here on my iPhone much as I have been doing in the past. Heck, even without the passwords, to not have to deal with the pop-ups and all. My hope is y’all can walk me through something I might be missing or that the team developing and maintaining the iOS version will be able to make some corrections.

Not blocking popups on my android mobile phone either

same problem here. i try to watch shows on kimcartoon.li and the pop up new tab ads get through. it doesn’t happen on my laptop, only on my phone.

@sampson do you have any ideas what’s going on and are you guys working to resolve this?
I have seen other post where people have shared about how they are having sync issues with iOS. I can help further narrowed down some details for you based on what I am seeing. How long have been using Brave on my desktop, which is a Windows 10, and my Samsung galaxy S9, which obviously is an android. I recently was able to get an iPhone 13 pro max, which is operating on iOS 15.2.1.

I got the phone I set up a sync chain with my android and desktop. I said it to sync everything, which should have included my passwords and bookmarks. Originally I was able to have bookmarks sync but then it went away. By going away I mean the bookmarks still existed but when I added new bookmarks on my Android or computer, it didn’t appear on my iPhone. And I’ve never seen my passwords or auto fill options that was saved in Brave become available on the iPhone browser.

When I opened up the sync tab on my iPhone, it appears as if there’s nothing synced. yeah when I open up the browser on my desktop it shows that my iPhone is on the sync chain.

It really kind of stinks not having all my account information from the various websites that I used available to me on iPhone. It also is annoying that if I put a bookmark on my phone but it won’t be available on my desktop or even the other way around. I even recently attempted to remove my phone from the sync chain and then added it again, but to no avail. 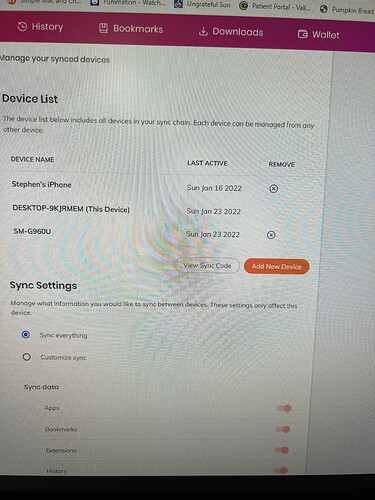 Password sync is not ready on iOS yet, we work on it.
As for ads blocking I will pass this feedback to the adblocking team

Brave sync on iOS is completely broken and has been for many months! - plus other bugs with sync on iOS too. (iOS) If you have iOS please read!
Sync passwords not working in IOs?
Saoiray January 24, 2022, 2:27pm #6

@michal i appreciate your response. Just so you know, I did get a response from @fanboynz saying something about scriplets and stuff. The way he said it left me confused, but I think he said there’s no way for y’all to stop the ads.

I’m still hoping to see changes, including fixing how my iPhone somehow keeps getting ejected from the sync chain. As they say though, one step at a time.

No way to stop the randomised adservers on ios, since they’ll just keep adding new domains. On desktop scriptlets (using javascript) can defeat these, no matter what ad domains are being used.

@fanboynz Just have to trust, but makes no sense to me. Like when you talk about javascript and scriplets, it looks like those are also available for iPhone. So I’d think whatever you’re talking about might be possible. Though I’m dumb when it comes to things like that. Guessing you’re saying there’s something in permissions or something which limits it.

This is what I’m looking at in terms of why I say it seems it’s also available.

Inserting Javascript snippets on a webpage load, and also making it compatible with existing JS snippets on the desktop.

I’ll say it again, I’m dumb when it comes to that. The info there may as well say “durhrh yhehhr vshddj”

Basically, it’s all foreign and gibberish to me. I mean, to me the GitHub was sounding like it does say it can be done but people have to program it into Brave. Guessing for you to link it and expressly say it isn’t possible means I’m not seeing it right. Guess let me stay in my lane and just hope eventually progress can be made on things.

The Github link, is a report of things to address, no ETA. So we are aware of it

Cool, appreciate it. I thought it was missing something. Thanks a bunch for you time and attention.

But is there a rough estimation when this feature is coming? Like Q1 2022? Also can the community somehow support the development of this feature? Because when password sync rolls out, I will completely switch to Brave.

I believe they said there’s newest iOS version should have it. While I’m assuming we will have to do it but I am planning on doing today is making sure to remove a device from the sync on your main device (I can access synced device list from desktop) and then add to sync again.

I do know the latest iOS update from Brave made changes to being able to access passwords and everything. I’m just not sure if it’s the final rolled out that they were working on or what they are telling us. If you can try the same that I’m gonna be doing later on today, I guess come here later and share whether you’re seeing any positive changes or if it’s still the same issue. I’ll try to do the same either tonight or sometime tomorrow

I’m referencing the issues with synced passwords and all for iPhone. But as far as the ads showing up on iPhone, since it’s been two years with no progress I’m assuming they just aren’t ever going to fix it like they have for windows and android. I mean the blocker’s not too bad on iPhone but it does stink that some types of websites do have things that slip through.