I am unable to us ChatGPT with Brave!

Description of the issue:
Ever since OpenAI made ChatGPT available for everyone, I signed up and started using it. At the very beginning, it was smooth with Brave (Windows) for 1 or 2 times. Then I started getting error messages. However, I when I ran it on Vivaldi, every single time, it created response to my prompt. I tried turning OFF all the shields, and blockers, deleting complete browsing data. Nothing works.

Surprisingly, ChatGPT runs seamlessly on the Android version of Brave and Vivaldi browser on PC but not the Windows version of Brave. Also, my Brave browser is on the latest version (at least it says that in the “about” section).

Steps to Reproduce (add as many as necessary):

Every single time I go to ChatGPT

Tried to test but apprently its hit the limit, is it still an issue? Does disabling shields and/or private window mode help?

Thanks for reaching out. Apparently, it worked for me only once. I don’t know the exact issue. However, I did mention it because someone from Brave team might have told me to do so (just because I didn’t mention) and it would have wasted a lot time from both ends!

Possibility that it wasn’t working due to their end at the time, and when you switched browsers it worked. Because of timing. 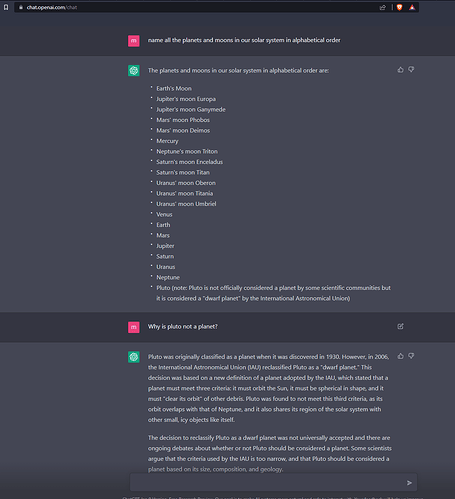 Hi, I had similar problem, mine was giving the same error as everybody mentioned, but when i switch to firefox, it works. There must be something in Brave that is blocking chatgpt.

Thanks for reverting. But I’ve experienced it every time. Not just once or twice. I also tried running it simultaneously on both the browsers and same thing happened. It worked on Vivaldi and not on Brave.

I afraid I’ll have to re-install Brave browser. In that case, I’ll lose all my settings 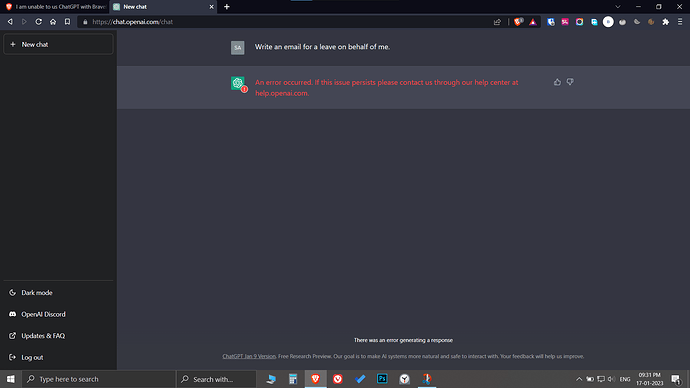 This is the latest screenshot. I tried running it today as well. It didn’t run the query!

Seems to be there end, we’re not blocking any thing from them. All requests are server side, they have no trackers from what I see.

Try in private window mode? But I suspect that its so intermittent.

I tried re-installing Brave afresh. But still it doesn’t work with only Brave browser.

I don’t know what to do. I tried contacting OpenAI about this, no reply from them

Thank you for the suggestions you’ve made though!

Having some similar issues, I’ll see if I can troubleshoot better tomorrow through the browser console.