How to export bookmarks to a useful file

Description of the issue:
Trying to export bookmarks from Brave to Firefox.

Expected result:
All of my bookmarks in Firefox

Additional Information:
It’s out there that your export file is incompatible with other browsers

Try this: Open firefox then import from Brave as shown in image. You will be importing, bookmarks, cookies, passwords and history.

NB. You can do export bookmarks as follow: export Brave bookmarks as html, then open firefox and import that file. But it doesnt import passwords and history. So the method below is much better.

As is usual in these situations, what I see doesn’t match the sample. You have a menu bar that I don’t. I hunted around and found the Bookmark choice. I followed up to and selected the “import data from another browser” choice. This opened the import wizard/import settings and data window. This showed the message “No programs that contain bookmarks, history or password data could be found”.

I had exported an HTML file from Brave which Firefox would not read.

@JerryC58,
You’re saying Firefox does not read the bookmarks HTML file that you exported when the Import bookmarks from HTML... option is used (in Firefox)?

That is what I am saying. I have exported the Brave bookmarks to the Documents folder and Firefox doesn’t see it. Bookmarks_6_1_22.html.

I’m wondering if this is a Linux specific issue because on my end, Firefox sees the bookmarks file when I select Import bookmarks from HTML....

Can you please tell me what distribution of Linux you’re using at this time?

I sometimes remove the ‘places.sqlite’ file (mentioned in the first link, following), prior to importing a ‘bookmarks.html’ file into Firefox; see:

Can't add, change or save bookmarks - How to fix | Firefox Help

This article shows you what to do if you cannot add new bookmarks or make other changes to your bookmarks.

Assuming I did it correctly, it didn’t help. Someone else suggested trying a different Linux, so I will try that tomorrow.

@JerryC58,
Just want to be absolutely crystal clear that this is the option you’re choosing when attempting to read/import the HTML file? 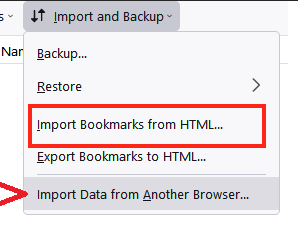 Yes. That is the choice. No bookmarks, history blah blah could be found. Another responder suggested it might be a Linux problem. I will try a different Linux this afternoon.

I have downloaded and installed Firefox on Linux Mint 20.2 with Cinnamon desktop. I have also imported the information from the Brave web browser.

Now I need to get a launch icon in the Internet menu for Linux Mint. Any ideas?

My understanding of all your writing, is, that you wanted 1 thing:

To import a Bookmarks.html file, into Firefox.

You succeeded in creating the exported Bookmarks.html file from Brave Browser.

In order to import the bookmarks from that ‘Bookmarks_6_1_22.html’ file, you would select as the destination:

(If you select Other Bookmarks as the destination, the Import may fail.)

Then, select Import Bookmarks from HTML … 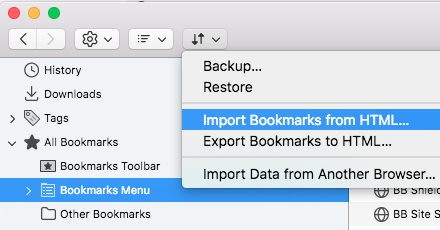 I created a simple ‘Bookmarks_TEST_FILE.html’ file that anybody can use for testing their IMPORT efforts. The file has 3 bookmarks.

When downloaded to your computer, change the filename suffix from .txt to .html (the Brave Community’s Discourse software does not allow uploading .html files).

The contents of the file:

Nope. A launch icon for Firefox itself in the internet start menu of Linux Mint Cinnamon desktop.

For some reason when a Mozilla product (Thunderbird, Firefox) is installed you have to go through some extra stuff to get an icon in the start menu.

Firefox and thunderbird came by pre-installed on Linux mint 20.3 cinnamon edition for me

*PS. Make sure your bookmarks.html is not corrupt by opening it in Brave browser.

I finally got it to work yesterday on Linux Mint instead of Zorin. I think I got most of the bookmarks. I think Brave has to do a lot better job of creating an export file.

Thanks for your help.