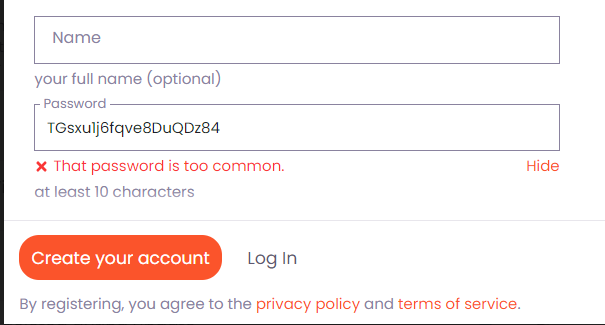 Naturally, I don’t believe that password is “too common” lol. I generated another password with the same generation setup and it was accepted so I’m guessing it was just an odd fluke, so not an issue for me, just wanted to report it so it was known

That’s definitely interesting. I’ll tag @Mattches on this for his consideration. I hope that perhaps it’s not a sign that Brave or whichever password manager you were using doesn’t have a limited amount of randomized passwords. Can just imagine multiple people all with the same passwords due to randomization kind of being crappy, in which case it really would be “too common,” lol.

If the info is of any use, I’m using KeePass, which is open-source. (direct download link)

My generation settings are the default of 20 characters in length, consisting of uppercase, lowercase, and digits

Hahahaha thats honestly pretty funny. I assume it was just a fluke — just tested on my end with a few generated passwords and didn’t see the error. Will keep an eye out just in case — thanks for the heads up!