Or they could regress and post an earlier version that actually worked, because right now a number of people are ditching Brave for not working in an important function.

Or they could regress and post an earlier version that actually worked, because right now a number of people are ditching Brave for not working in an important function.

You’re more than welcome to go to our Github page and download an earlier update – just know that one of the main reasons staying up to date is to ensure that you have the latest chromium and security updates applied to keep you safe while browsing. If you don’t care, by all means: 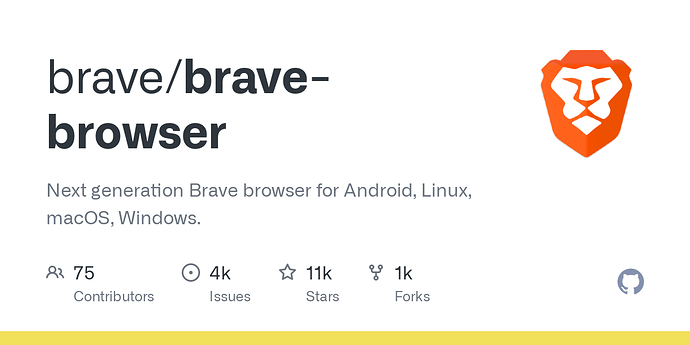 At least, devs should post an update about this issue, in my opinion.

You are replying to one of a few update threads. Can I ask what you’d like to be updated on, specifically? We’re currently trying to roll out a working version of Sync asap. We’re aware that some people are still seeing crashes and certainly aware that people want Sync back. If we could hand you an update with everything working perfectly right now, you bet we would. But we can’t – we appreciate your patience while we work on fixing this issue and continuing to implement new and better features into the browser.

We’re currently trying to roll out a working version of Sync asap. We’re aware that some people are still seeing crashes and certainly aware that people want Sync back.

For me, this is an update about this issue. Thanks.

Is there an ETA for the complete fix of this issue?

I appreciate the effort in bringing sync back as soon as possible. As much as I love Brave, I might have to bail, as my work productivity has taken a big hit ever since sync went down. Not that I am entitled to any explanation, but I sort of thought temporarily meant less than one month, for some reason.

You can active in “flags”.

It’s possible but it’s risky at this moment, because it can lead to constant crashes, as mentioned by some users, or other unwanted behavior as stated at this post.

Ah, thank you for the suggestion.

In my case, works nice.

So as @aamadorj said, this ended up making my Brave browser crash immediately upon opening. I can’t even disable sync at this point. I ended up trying Edge Beta, which has profiles and sync, both of which I absolutely need for work. It’s not quite as good as blocking ads and tracking, but it’s close. Privacy is very important to me, but I have to be able to sync.

I was then able to recreate my sync keys and it’s working now. No crashes, and I’m syncing among two PCs and one Android device.

Thank you Brave for working on this. I really appreciate your browser! When I am studying for school on the web, Brave helps me block all of the annoying popup videos and ads that are distracting.

Does anyone know why the fix is taking so long?

I know this question is somewhat silly, but hear me out. I have completed about 1/4 of my classes for a Computer Science B.S., so I am still learning and naive. I am just asking the question from a programming perspective. I really am not trying to make Brave look bad! I am thinking about my future when I become a developer. It seems to be taking quite a long time to find the problem to this sync issue. Are there not enough developers available to troubleshoot? Is the code written poorly? Is the issue really just that complicated that a team of developers can’t figure the problem out after a few months?

Again, thanks for all that you are doing and I am only asking this from the perspective of noob programmer trying to understand.

How about heading to “brave://flags” and reenabling it? I did it and I am still stable on windows 10 beta branch.

ty for mentioning this!

Is there an ETA for the complete fix of this issue?

@mon_vilain,
It’s pinned here on Community on February 10th and remains so. It was also pinned on reddit and has now been replaced with a separate post, also the very first link on our subreddit:

If you go to our Help Center, and select Sync, the first thing you see at the top of the page is a warning about Sync issues:

We’ve been very open and up front about the issues we’re facing regarding Sync, as well as are working on it and that it may take some time. I don’t have an exact date for anyone just yet but I can tell you that when we do, we will make an announcement about it.

Thank you (everyone) for your patience and understanding.

Thanks for your time and answer.

Thanks, worked and everything back up and running.