I can get to https://swappa.com easily with Chrome, Firefox and other browsers but Brave says:

This site can’t be reached

The webpage at https://swappa.com/ might be temporarily down or it may have moved permanently to a new web address.
ERR_CERT_INVALID

No it is not down and is very reachable by other browsers.
Also when opening search.brave.com in Firefox my antivirus says it is infected with smiles-survey.com with is stated to be a Scam.

Other than those two issues love the Brave browser. Lots of great features.

I suspect you’re entering a typo’d website, then redirecting to a scam site.

If you manually copy, and paste https://swappa.com/buy/phones does that work?

No that does not work and I made sure I was not making a typo. I am now seeing this on other websites also. But they all work fine with Chrome, Firefox and so on. Brave has a problem. Did you try the website? If you aren’t having a problem then maybe somehow the certificates on my computer for Brave are messed up. 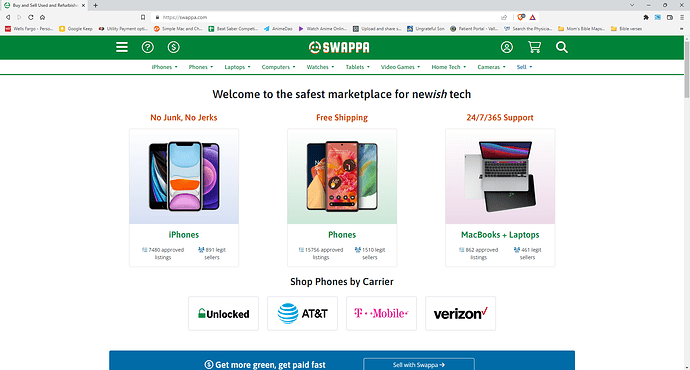 Yes that is the website that I can’t view with Brave but with Chrome, Vivaldi, or Firefox it works fine. Also I just booted up another computer and installed a new copy of Brave on it and I get the same warning screen that I can’t proceed to swappa.com. So it is not just a messed up certificate on my computer. However yet another computer in my house that is using a 32 bit version of Brave works okay so it seems this is only happening on 64 bit versions… 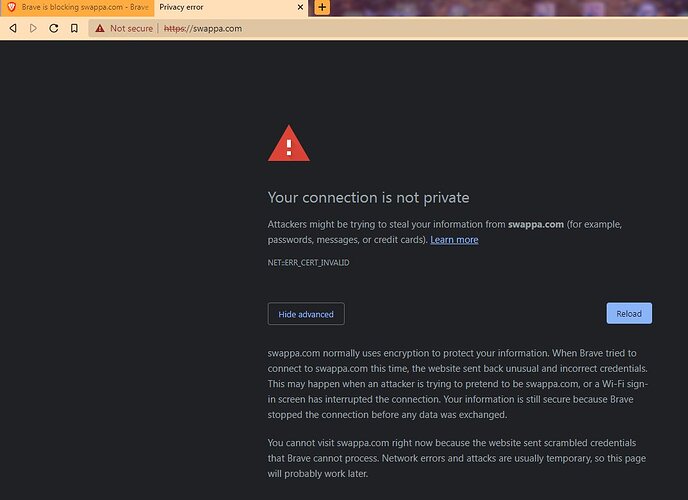 @matrix.wizard Yeah, I just was showing it comes up here. So it might just be something in the browser. Do a favor and check with the basic troubleshooting steps that often gets suggested, just to see if it might help us narrow down your problem.

Kind of go down the list. If any of them makes an impact, stop there and don’t continue on.

Part of me is wanting to assume one of the above will yield results. If not, could try one little additional thing. You would think it shouldn’t make a difference, but somehow seems to be the magic step for some people experiencing issues. It seems oddball as well since happening on multiple devices, but at same time, if you have them synced or do same activity on both, might have similar issue shared as a result. So kind of a “Hail Mary” here… 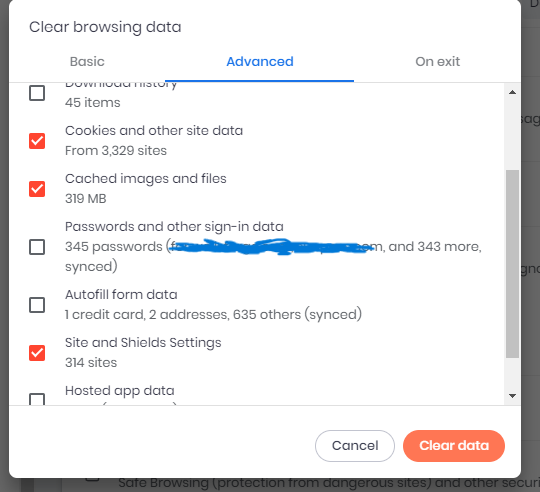 After checking this on a 4th computer I have pinned down the problem. The antivirus program Avast is causing this problem with Brave browser and only Brave. Other browsers are not causing the problem. So some sort of conflict in how Brave sees certificates when using Avast is the issue. I’ll contact Avast but I also think Brave programmers may want to look at this as it’s the only browser experiencing this problem.
The other computers which had Avast were not synced to any others but the one computer which did not have Avast on it was the only one working at swappa.com. At that point I temporarily disabled Avast on my computer and I could then see swappa.com with the Brave browser. I had this done before seeing your post above but thanks for the suggestions as you were correct it could be related to antivirus.

Good to know issue is kind of resolved. Though I know still may be conflict there between Brave and Avast. I’ll tag in @Mattches and @fanboynz so they are aware. If there’s anything that can be done on Brave’s end, I’m assuming one or both of them will pass it along to the appropriate people.

Yes I can use other browsers for now for the couple that are being blocked by this combination of Avast and Brave. Hopefully Brave can look into this as it’s the only browser having the issue. I posted info at Avast also. Cheers

Is there an option in avast to disable any Web protections?

Yes I can disable Avast protections but that is not the best idea when logging into banks and other secure sites. As of today I was unable to login to a major banking website and unable to use PayPal to purchase an eBay item while using Brave. I actually did disable Avast in trying to pay for the eBay item but it still was being blocked so I had to use Chrome. Avast forum continues to say it is not their problem or it would be a problem also with other browsers. In all cases I have noted the lack of ‘www.’ on any of the sites that are being blocked. Example https://pay.ebay.com/etc. or something close to that was observed. Also the bank accepts a login until it shifts to a URL that does not have ‘www.’ in it such as https://secure.bankname.com/…

Okay I have solved the issue. It was an Avast issue which could not be fixed even by duplicating Avast firewall settings for Chrome. I discovered I had virus definitions set to auto-update but had the actual Avast program updates turned off and set to ‘manual’. After changing that to ‘notify’ and checking for an Avast update it showed there was an update. After the update everything is fine and I can get to swappa.com and other problem websites that were being blocked. Case can be closed as it was not really Brave but it was indeed odd that only the Brave browser was being affected. Cheers