I’m running Brave and it’s using upwards of 400% of CPU usage on my new Macbook pro.

I’m concerned about this. I love brave and I’ve been using it for years but the fixes in the linked discussion don’t seem to solve my issue.

Is there any chance this can get fixed?

I’m following up on this post to see if someone in the community can comment on it.

Well, you say it is a ‘new macbook’ is it new because you just bought it or because it is newest model but you have been using Brave with it for a while?

You can troubleshoot the problem anyway by using Brave’s internal taskmanager you go to ≡ → More Tools → Task Manager
Then you can see which Tab or process using most CPU and all, and then you can report back and then maybe there is a workaround or something to do with it.

I mean, MacOS resource monitor is a little more useful than Windows Taskmanager but they are not good to show which Brave Browser Helper (Renderer) is using more resources than others, that’s why internal taskmanager is the one you should use.

I don’t use MacOS but I know that unlike Windows, MacOS and the internal Chromium/Brave task manager does the percentage by core, so 1 core = 100%, where in windows is like doesn’t matter your core amount it is from 0 to 100, so if you got a new Mac and you got a lot of cores, like a 16 cores one, whic means the percentage goes up to 1600% (which doesn’t make sense for computing but that’s the way they did it), then 400% doesn’t seem as much compared as if it was 6 cores computer, so since it is relative it can be still normal or pretty bad.

But at this point it could be anything with the information you provided, it could be anything a Brave is causing when is running in the apple processors or Chromium in general, you know, since Chromium has the whole site-isolation and sandboxing which uses more CPU and Memory, the GPU process, or tabs which are usually the ones consuming the CPU.
If the problem was a tab with Youtube or something, well, it would make more sense, but you could also check brave://GPU because it could be the Hardware acceleration not totally working and it is using only CPU.
Hardware acceleration is crappy in browsers, and browsers don’t fully use it, but it is there for a reason and you can troubleshoot if it is a video site that is causing the high CPU by checking to see if the GPU acceleration is working, since videos is usually what uses more CPU or a WebGL game, or something like Brave talk/zoom/jitsi, if you see it is like youtube or something you can even use brave://media-internals/ to display information about decoders and all that for players and any media playing.

But as far as I know, many Brave team seems to love using Apple computers, often I see MacOS screenshots in commits and issues over Github, so, if it was like a Brave issue, I am sure they would notice and fix it by now.

Thank you for the feedback

The mac is an M1 max pro. With 64 gb of ram and plenty of storage. The tab that seems to be using the most CPU power input is my student account tab called Courseworks. I’ve attached a screenshot below. The memory footprint varies but the CPU usage is still the same around 400%.

Your response is very helpful thank you. Could you repost it?

Separately, I created a new brave user profile and it seems to have less of an issue. 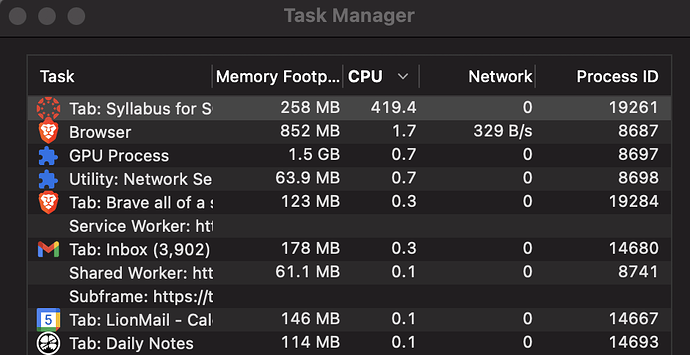 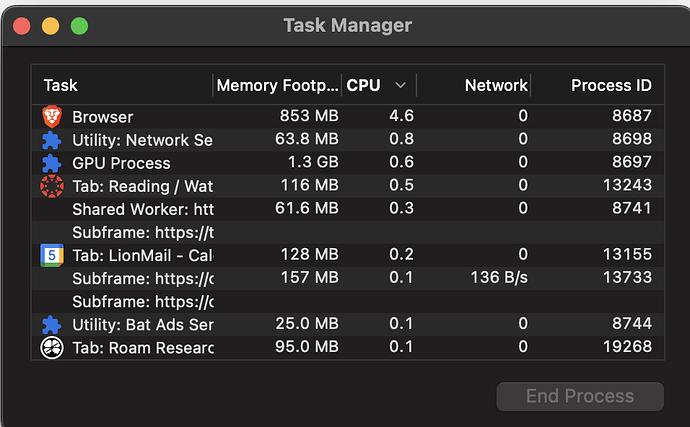 This is the CPU usage for the new profile in brave.

What are you doing in Courseworks when it starts using the CPU? like video or just simple browsing like your courses and your professor information and such? But since it is a university thing, only you can test it, so I can’t help you with that, like try to see if it is like a Shields issues or not or some weird script.

At least you know it is just a tab, not like the whole browser using CPU, so it is easier to test what could be the issue.

Since you tested it in a new profile and CPU usage seems okay, you should see what you have in one profile that you don’t have in the other.
So I would start with extensions, and the easiest things to do is to disable them, and see if it lowers the CPU usage in the same page you were when it used 400%,
since extension can mess websites and then cause these types of issues, if it works, then and CPU is normal then turn on one by one, refresh page and see which one is the cause of the issue, then report the issue to their developer.
That’s like the first test I would do.

There are many settings shared between profiles so that’s good you tested profiles, so it would discard many reasons, like, you could still test disabling Shields but I think the only thing that is ‘per profile’ is the Aggressive vs Standard and ‘regional’ filter lists that you could have enabled, but doesn’t seem like a Shields issue here, or GPU, since both profiles would be the same in that case as well.

So start with Extensions and see how it goes with that.

I think extensions are the likely problem, but I haven’t had the time to test out which one could be causing the issue. My girlfriend also uses brave, and I found that she was having the same issue of high CPU usage. With a new user she hasn’t had any problems as of late.