Alt+Shift+F4 should not do the same as Alt+F4

Alt+Shift+F4 should not do the same as Alt+F4
as the title says. Brave browser should be able to sense that there is a shift in there and not close the browser… (I use all sorts of weird keyboard shortcut combinations for my AutoHotKey scripts…)

Agreed. @Mattches do you think this is something plausible? (also kind of curious, how difficult/time consuming is it to make adjustments for something like this?)

@Saoiray — depends on the adjustment but these are typically not trivial but is easier to maintain than some changes.

I agree and the browser does and should be recognizing the Shift key being held as well. Otherwise, you’d get the same behavior when you use Ctrl + T and Ctrl + Shift + T. I’m more inclined to believe this is related to how the AutoHotKey script is configured. Can you share some details on that?

@Mattches Do a favor and test on your device, at least on Windows. Originally when this was posted, I tried it and Alt+Shift+F4 did indeed close my browser. Of course, I don’t use AHK or anything similar, so my hotkeys should all be default. I figured it’s how it would always work.

That said, I just opened a new window and when I tried Alt+Shift+F4 it didn’t close while on Brave’s New Tab Page. So I was going to write it off. But when I came here and started typing, I tried it once more and my browser closed. Then I went to Twitter, Reddit, and other random places to attempt, they all closed when doing that shortcut, like it’s not registering that Shift is being pressed.

It will be interesting if OP and I have the same issue but yours doesn’t replicate. Also FYI, it worked the same way in Nightly and Release.

Well, I said NTP, but Dashboard or whatever this one is called. Just weird Alt+Shift+F4 won’t close the window when on this but it will anywhere else. 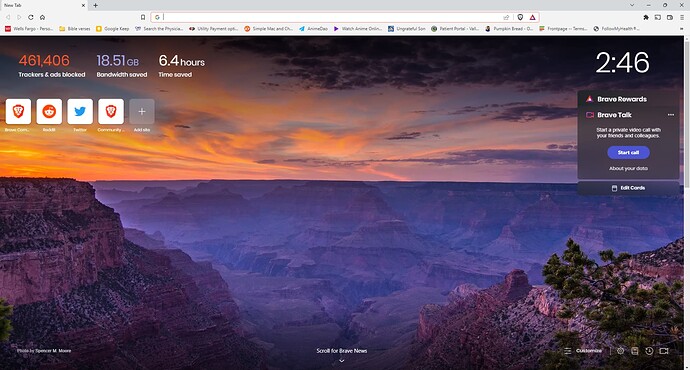 Actually, I should make an addendum. It doesn’t matter what I open, whether it be File Explorer, Chrome, Brave, or anything else on my Windows PC, the windows all get closed with Alt+Shift+F4. So it’s not necessarily a Brave only thing. Though still a question of why the one page won’t close with it. So I guess something can be done in the browser, but not sure what/how.

@grandiogoro do you see it as an issue like me, where this happens in other browsers/programs/apps? Or is yours somehow isolated only to Brave and works fine on all else?

@Saoiray,
This is part of the reason I mentioned it may be an issue with the hotkey configuration. Alt + F4 has always closed Windows…windows. I would expect the window to close because it is a windows config, not necessarily a Brave one. When the hotkey is not configured to do anything else, the system will read Alt + F4 even if you’re holding Shift.

OP seems to have the configuration set such that it should be doing something else. I’ll ask around and see if anyone knows if this is the expected behavior — I suspect that one would get the same results regardless of what browser they were using.

I tried Alt+Shift+F4 vs. Alt F4 in various Win 10 programs, here are the results
Anki, Edge (browser), PDF-xchange editor (which is highly customisable when it comes to keyboard shortcuts) : Alt+Shift+F4 does NOT close the app while Alt+F4 does

Spotify, Firefox, Discord, Reverso : Alt+Shift+F4 does actually close the app while Alt+F4 does like you hypothesised. @Saoiray

Seems to be 50/50 and maybe not specifically tied to Windows, especially since Alt+Shift+A4 does nothing in the Edge Browser, which is Microsoft’s