Why the small gap on the bottom every time I re-open Brave?

Open Brave
Maximize the Window (no fullscreen) to the top of the screen and at the bottom.
Close Brave and re-open it
Now the window doesn’t go all the way to the bottom (to the task bar) but instead shows a small gap. 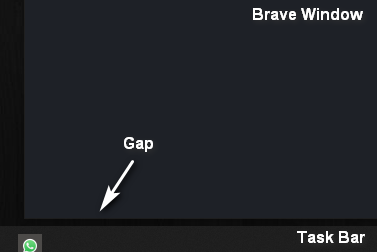 @Celico,
Windows 10 or Windows 7?
Also, are you maximizing the window using the actual maximize icon on the top right, or are you dragging the window manually to fill the screen?

I am on the Brave Nightly using Windows 10 and I am dragging the window borders.

@Celico,
Can you test using the maximize button and seeing if it behaves the same?

@Mattches Maximizing works and stays that way. It’s only the snapping thing that has the gap after closing and opening Brave. This also happens to the right side of the Window when I use the Windows 10 snap function (Windows key + arrow key right/left). It snapps correctly, no gap on the right side or the bottom but when I close Brave and re-open it it has this gape on the right/left (depending on the snap side) and the bottom. This is super annoying if you use the snapping to align multiple windows. The align perfectly after the snap but overlap after you reopen them.

I tested a few other programs and it works as it should with all of them but NOT with the latest Chrome Beta (77.038). It behaves the same as Brave, meaning I have the same gaps. So it seems to be a Chrome/Chromium problem? The latest Opera works though.