Hey there! Been using Brave Browser for almost a year now but never got around to using Brave Search until today. I did a test search by typing in “Hi” and realised there’s no direct meaning in the search results, unlike Google which has a ‘Dictionary’ feature. It gives the meaning of words by (I think) extracting the definitions from online dictionaries, making it easier to look up new words.

This is the Dictionary feature I’m talking about: 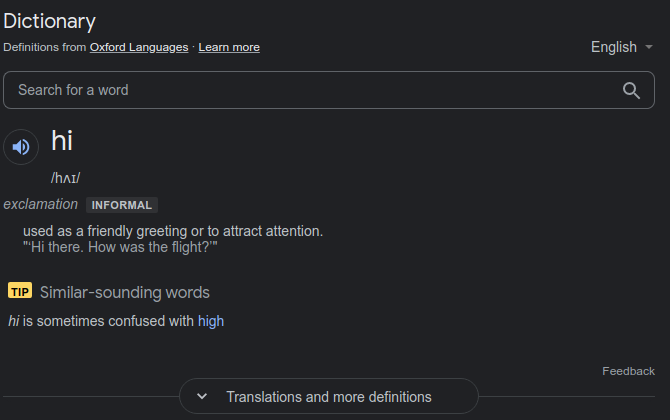 I’d really appreciate if the dev team could add that feature in Brave Search. It would especially help non-native English speakers like me who have to look up new words on an almost daily basis.

You need to type in ‘pluck meaning’ for it work.

I have opened a issue for it to be made easy.

(Sorry for the late reply. Was having exams.)

Ah cool! The dictionary feature does work for most words so that’s great.

I have opened a issue for it to be made easy.

I also felt a dictionary feature was needed, until I found this thread! However, I DO wish that Brave’s “meanings” were expanded quite a bit. I appreciate that the definition pops up on top of the results, but it only gives a couple/few definitions of the word. Brave does not handily display any related words (anonyms/synonyms), information regarding the which part of speech, phonetics, etymology, origin, syllabic makeup, or even how to use it in a sentence.
Dont get me wrong, I really appreciate the “meaning” of the word being readily accessible, but as often as I need a definition, it’s more frequent that I need to identify some other aspect of the word, which I then need to track down.
Just my 2sats.

Totally agreed. A detailed explanation of any word is a must.

Brave is sooo great! Some of us were somewhat unenthusiastic about the lack of detail when using the Brave search “meaning” feature. Many of us have gotten rather accustomed to the convenience of simply typing out a word into Google’s search box (heck, even an horribly spelled, barely recognizable word) and being able to locate/corroborate the info that you were looking for without navigating any further than Google’s dictionary result.

Brave must’ve heard us loud and clear because their “meaning” feature is already MUCH improved! Brave is showing the browser & search engine world that there is more to it than just Google…