I was trying to find a specific article I read the other day and I couldn’t remember exactly how it was worded but I remembered a keyword. I typed quotes around it like I used to in Google but didn’t find any difference in the search. After some experimenting, I concluded that Brave Search must not have those hidden tricks that Google does? If this is the case, why has this not been implemented? I switched over to Brave to find results that Google wouldn’t show me but I’m having just as much difficulty finding it on Brave due to the lack of any features built in.

Correct. I’m about one search of not being able to specify an exact phrase away from no longer using brave search.

I’m getting tired of needing to search, for example, windows, ios 10 mirroring and have it give me windows 10, ios mirroring. All of those results are irrelevant.

I have found this to be a significant problem recently, to the point that half the time I do a search I have to use a different search engine that has this extremely basic functionality.

That this didn’t get implemented month one, let alone within the first year does not bode well for brave search…

for example, windows, ios 10 mirroring and have it give me windows 10, ios mirroring.

Interesting. I have just made a try with “ios 10”. You are absolutely right. Quotes have no effect.
This is weird as quoting phrases is a kind of standard in most search engines. Not only web search, but also databases and documents.

I was also under the impression that basic things like quoting worked — let me test this and/or see what the team says about this.

I’ve brought it up a couple times. The first time (back in November), I was told: 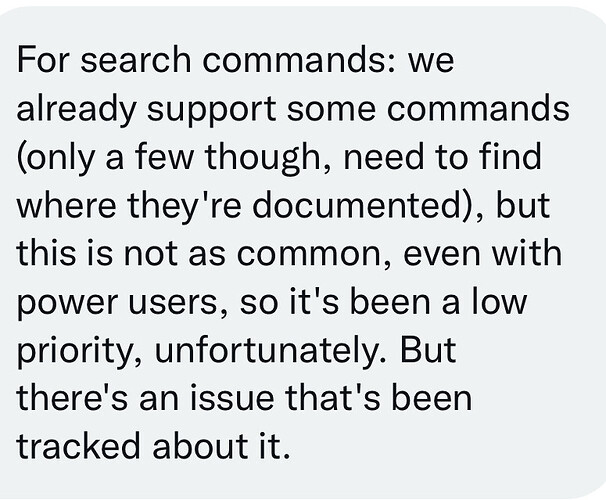 They never did get back with me on which commands are supported. And when I mentioned about adding it to Help articles, doesn’t seem to have happened. Also have to say, when was mentioned it’s being tracked

Then as a result, I’ve recently reached out to Jan and Brendan on Twitter, hoping to get some movement on it. Not sure the overall status from that follow-up. But I do see where Brendan tagged in Solso and ParedesLJavi.

If you do end up finding out any commands supported, would be great. But I will say that we’ve had a decent amount of people over the years complaining that Brave Search isn’t seeming to refine searches. At the very least, not using the same as Google did.