My C Drive is filled up with Brave logs?

Description of the issue: My C Drive Is Filling Up with Brave Logs
How can this issue be reproduced?

Expected result:
I need this to stop or at least cleanup after itself

25000+ files and I’ve deleted some but I don’t know what they are and they are in my user folder on my laptop under another folder witth my desktop computers network name which has a synched Brave browser installed on it. That may be coincidence I don’t know.

It seems they are of some use according to script writers. 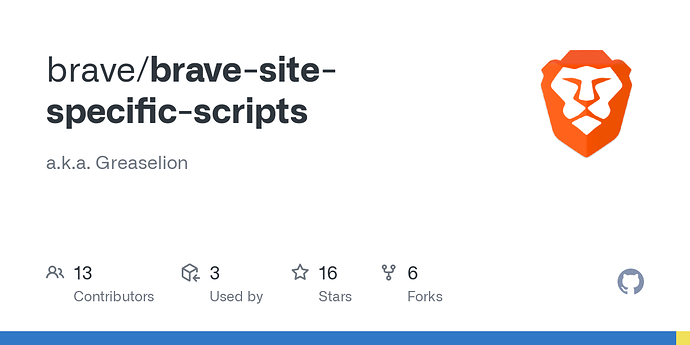 a.k.a. Greaselion. Contribute to brave/brave-site-specific-scripts development by creating an account on GitHub.

*I have installed Brave 4 days ago and I already got hundred of temp files under Greaselion folder (30 Mb)!

What’s the resolution? Why isn’t everyone complaining and they appear to be in multiple languages so every log has a hundred different languages (ok so that’s a bit of an exaggeration).

Can I get some help here please? @Chocoholic @moderators

Did you check this as a solution? Could you remove it?

@CityguyUSA This is a known issue which appears to occur for older profiles. A fix for cleaning up extension updates is being released in 1.42.x which is scheduled for Release on August 2, 2022. So, this means the fix is currently in Beta. If you have Beta installed, you may want to check the size of Greaselion files/folders in Beta as they should be smaller.

I do not know if non-extension related files/folders reside in the folder or if other type files/folders will also be cleaned up. You may want to clear history/cache for all time, exit browser, and reopen and see if that has any impact. An older post/GitHub issue with Greaselion errors mentioned this. Just passing along. I don’t know if this will work or not but I hope it does!

Greaselion temp folders are not cleaned up when extensions are updated

I deleted the temp files under Greaselion! There are tens of thousands of them (I installed Brave 7 days ago); it took 3 min to detelete them on SSD!

So far so good; I let you know if something goes wrong.

I did do a search on greaselion but nothing that I saw seemed to relate to what I thought was some kind of sync issue.

Remember these are accumulating on my laptop under a folder that’s named for my desktop’s network name and on my desktop there’s a folder that’s named with my laptop’s network name. Is there folders on my Android as well? Unknown at this moment but my laptop was grinding to a halt after days of trying to find what was happening. These are relatively small files just too many off them and that’s not usually the kind of files that hog up a system dive in my experience. The don’t easily sift to the top.

I’d rather not delete my history because it does have value to me and you’re not sure if clearing the cache would even be effective where as I’m wondering if I would have to clear it from my destop since it’s seemingly coming from there which makes no sense based on the prior answer that the other person told me was the function of these for scripting. Why would scripting support files from my desktop be on my laptop? But then I wonder what’s with all the files that appear to be for different languages. I’m only using English.

Can I just delete these 25,000+ files is the ultimate question now. I can add them to a clean-up process and not have anymore problems. I just don’t know if they’ll cause some type of failure. But they need to come off my laptop. I did take the folder and rename it to see if anything would come to a screeching halt but nothing “obvious” has happened that I’m aware of. I guess I should check for yet a new folder being created on my laptop since I renamed it.

The only thing I found on my desktop was 1 record in the event log that probably has more to do with the failure of Brave to respond when going to a new site.

“Name resolution for the name sync-v2.brave.com timed out after none of yhe configured DNS servers responded.” Eventid 1014.

If there’s another log file I should be looking into let me know.

Are the filenames the same as what I posted? Apparently the 2 fixes that are upcoming are not the same files. My files are actually problematic from the mere size/length often causing failures because they exceed the 254 path limit.

The fixes also reference extensions I presume the are refering to add ons. I can’t imagine what add on I would have that would be multi language and that would reference greaselion in the name.

I should have checked the latest file date although they must be new because this is a really recent problem.

Did you update Windows before seeing this? It looks like your Greaselion files are located in an old Windows folder, generally created after Windows upgrade or update. If this is the case, It is safe to delete them.

*NOTE: To see the files, I needed to enable “Hidden files” in Windows Explorer. 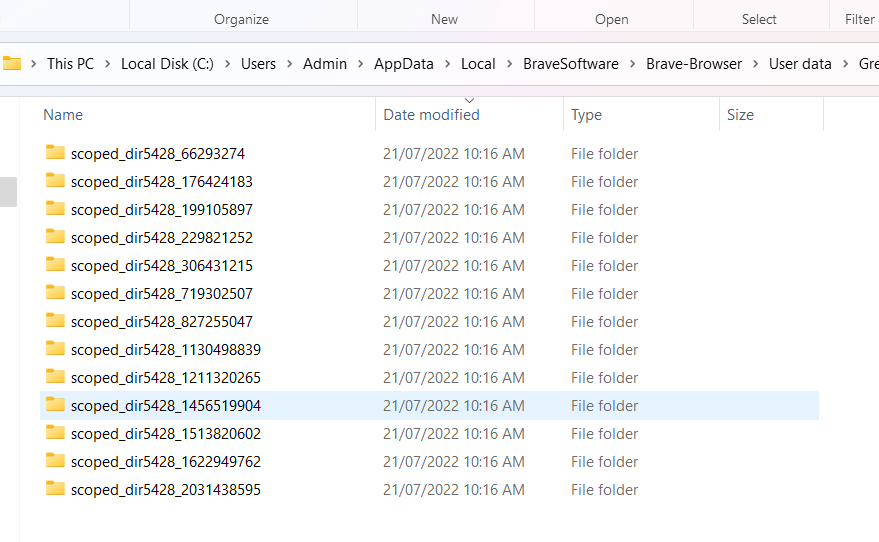 OK. So here’s what I’ve arrived at. I think this is something not related to Brave. I think that Brave just got sucked in because whatever was copying data from my desktop to my laptop was essentially copying everything in C:\Users\Todd. I don’t know why it was doing this and it doesn’t seem to copy every folder under C:\Users\Todd but it copied most. It’s either some Windows process or some cloud that was syncing without me knowing it. I would never copy my user folder except for backups. Ultimately if it hadn’t picked up the Brave folder I would have never had a space issue and never found any of this.

Thanks guys for your help. I’m going to delete the entire directory. After all it’s backed up so nothing is truly lost.