When an upgrade becomes available, Brave pesters us every few hours with a pop-up alert that gets in our way without notice. Chrome initially shows something in the top right part of the browser windows.

It stays as a constant reminder, and doesn’t pop up in our way of doing other things. Plus, it’s less likely that you’ll accidentally trigger an upgrade if it triggers while you are typing.

It automatically checks for updates, and it usually has one weekly around Wednesday. I tend to keep my computer and browser on/open almost all the time, so the main time I quit the browser is to perform the weekly updates. But I don’t like doing it mid-week, so I usually click “Later” until sometime on the weekend or later. But I’ve seen this alert come up in as little as 2 hours since the last time it popped up. So I can end up having this interrupt what I’m doing a dozen times or more easily each week. I love the browser in the few days after an update, but get a bit annoyed many times a day after an update is available, at least until I install the update.

If I’m watching a video, it can pop up in the way of what I’m watching. If I’m typing, I’m concerned that I might accidentally hit enter or something that could lead to it installing or doing some other action.

One alert per update is reasonable, but an obvious, but out of the way method would be nice. I’m including an image of what the alert looks like. 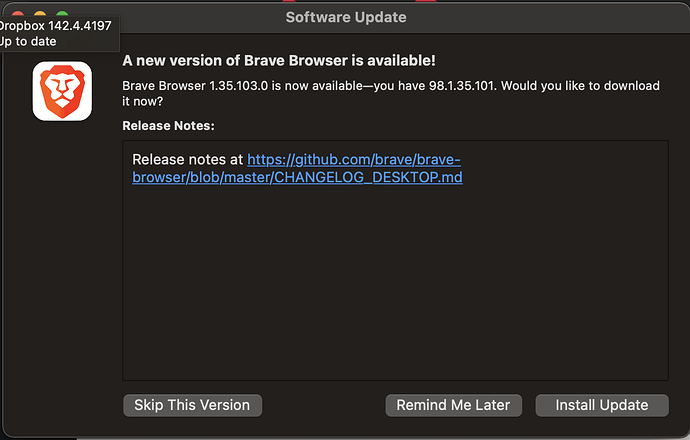 Is that actually coming from Brave? I’m asking as I noticed Dropbox listed on the screen and all. I’ve not used Mac nor have I used Dropbox, so unsure if you’ve got it set up there. If so, might be notifications through it rather than Brave.

What’s interesting is I never get an update notification on windows, android, or iPhone.

Dropbox is unrelated. I wasn’t sure how that showed up that time, but I think as I chose to do a partial screenshot, my mouse was probably hovering over the Dropbox menu or something and the tooltip came along for the ride. When that window prompt comes up, it’s still in Brave. I didn’t care to wait or trigger that prompt yet again. I can often trigger it again by going to the “About Brave” area, and I’ll see it checking for an update. Once it realizes an update is available, it will trigger that same window/prompt. But that’s just if I want to force it to come up. It comes up periodically, too.

I took a fresh screenshot, and it’s clean of that other tooltip. 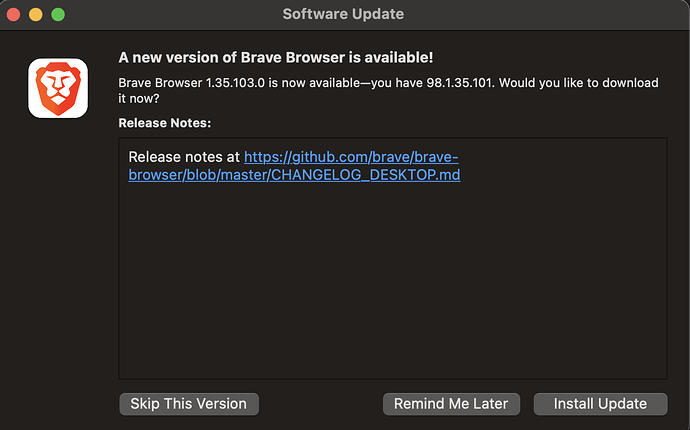 Now that I think about it, how does Brave indicate it has upgrades for other OS/devices if it doesn’t pop up a window/prompt? Is it more like Chrome for those, or does it just not check for updates periodically (or many times daily)?

how does Brave indicate it has upgrades for other OS/devices

I can only speak for Windows, Android, and iPhone. On Windows, I never get a notification or anything, it’s just always automatically updated itself like Chrome had done. On Android and iPhone, I never was alerted and had to go to the Play Store/App Store and check if any updates. If updates available, I’d hit the Update button. But Brave and my device never had anything pop up to let me know that updates were available, I have to go look myself just to find out (if I don’t turn on auto updates, where my Android settings were to automatically update apps)