Feedback on Brave for iOS

Hello, this is feedback for the Brave browser on iPhone iOS. This is specifically regarding the YouTube website.

The reason why I want to watch YouTube in desktop mode instead of mobile is because the desktop mode of YouTube allows the user to “loop” the video (have it play it continuously on repeat). You can long press the video (or right click on a PC) and a menu will pop up, and it will give you an option to loop the video. The mobile version of the YouTube website does not allow looping of the videos. I often listen to relaxing music on YouTube and I want the video to repeat, but the auto full screen problem really gets in the way and makes it difficult.

Another suggestion is maybe add some kind of loop button for YouTube videos through the Brave browser so the video could play on repeat? Otherwise, fixing the desktop fullscreen issue would work.

At YouTube, I get the Desktop response, and play a video (with music), and the Loop switch does appear in Landscape and Portrait positioning of (holding on to) the iPhone.

Though, there was a wee bit of a struggle, getting the pop-up menu that you see (lower-right portion of the following), when I used the “Long Press”: 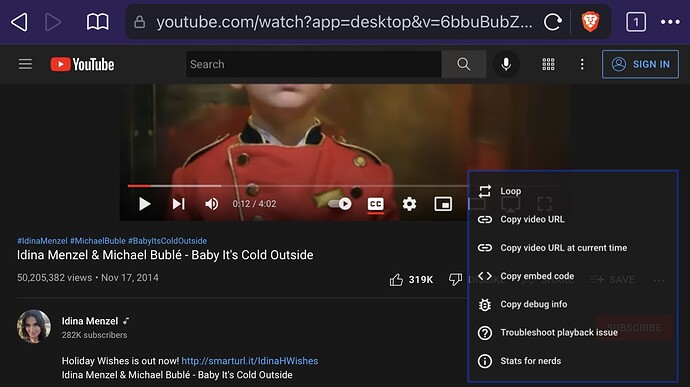