I had logged the complaint three month ago. I had reinstalled ubuntu and now it’s still not getting connected to Gemini.

Have you already connected four devices?

3 devices. Reinstalled ubuntu on one. Earlier there was a desktop which I stopped using.

Brave developers are very confused, about what they say and moderators here too. I am still suffering with my previous issues, to resolve them they gave me some repeated instructions to perform but nothing came out, and they now don’t even afford to respond.

I was also facing issue with maximum device limit reached for wallet, but I filled a form to request to unlink my wallet from inactive one, so I could get a slot to link the active one, and it worked. Also, they stated from March 1 onwards there would be no limitation, but it is still there.

Thank you for your reply. I did submit the form 5 days ago. No reply yet.

It takes time. For me, it was more than a week.

To be honest, I have no idea how will I be utilizing BATs. But I use brave extensively only for BAT. And, now, I think it’s time to get out of this s_h_i_t. Firefox will be far better if we exclude BATs. What do you say?

I use brave for the word brave + BAT. Love firefox for sure. Why firefox is not launching it’s own tokens?

I guess they have other ways to earn.

For me, it’s more than a month 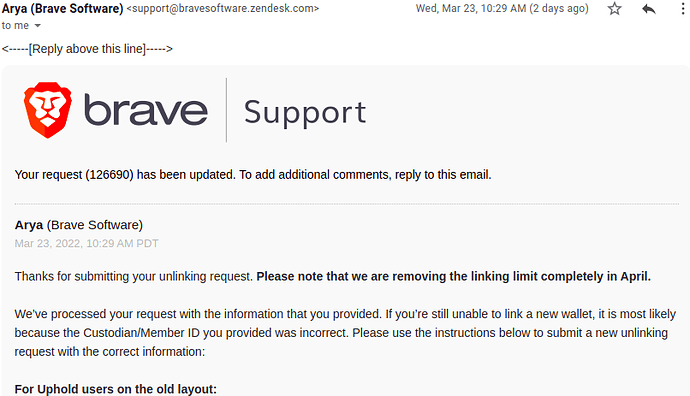 Here is the reply which lacks empathy totally. I replied it’s not working.

Oh! it’s March. They will unlink in April.

They will unlink in April

By the way it’s April now but still getting the same err and if you courage to email them then they will surely say : Please note that we are removing the linking limit completely in May.