Different reward between Windows and Android?

Hi there,
I’m receiving 0.01 BAT reward per Ad in Andoid, but I receive 0.05 BAT in Windows. and I receive tons of ads (in good days, 15-20 ads per hour) in Android, but I think its a bug that I receive 0.01 BAT :s
Can someone explain this? I didn’t find anything about these values in the community

How many ads have you recived until now and how many bat is counted in your estimated earnings?

195/0.05=9.75 that is accurate since i have receive a few ads in the mean while im making the calculation and it takes some time to update the counter and don’t being so strict.

Of course if you want to be very strict with that well: 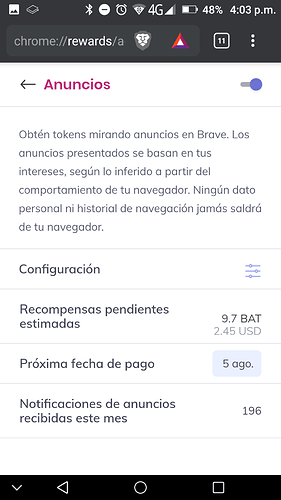 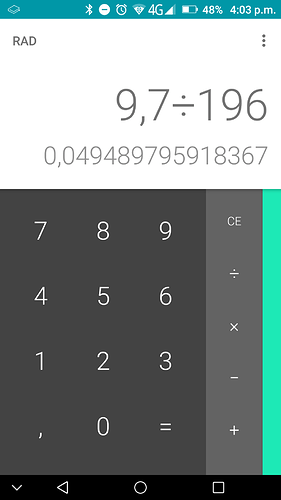 let me jump in this one

it’s interesting to see different rate for the ads but can i ask do you use vpn with anyone of your deviced or both of them
if yes does they go via fixed country or it random
i.e that it keep change the location of the server each time you start the vpn

Dear Not Recive Some Balance From Ad View Brave-Ads Support

Could you please post here again the same screenshot after 54 ads? Because I think that it will be again 2.7 BAT. IT is only a my opinion. Lets see what will happen.

According to this, from a comment from @eljuno the BAT rewards price vary, i assume it depends also on the advertisers and the BAT current value.

In any case, also take in count that the counter displays round numbers (on mobile).

But yes, the average price for BAT according users comments is 0.05 but is no law.

When I first started receiving rewards I was getting .1 bat per ad (the price of bat was at around $0.31). When the price went down to $0.10 we did not see a decrease in the amount per ad, but now that it’s going up I have been getting gradually less every time. It takes 3 or 4 ads to even equal .1 bat now. What exactly is going on?

“Nothing changed. Because it’s vary for each ad. And it’s always 70% of the revenue share.”

thanks for the details