Context: I show the Bookmark toolbar. It rocks. It is loaded with folders (11 total), each with bookmarks associated with a context. It means fewer clicks to more frequently used content. I like short folder names because I don’t need large click-targets but I do want many to show even when the browser is running in a narrower window. I found emojis make excellent short folder names–icons for work

. The emoji doesn’t even need to be relevant to the topic. I make the association quick and the pictures are easy to spot. Trouble is, all Chromium browsers prepend a folder icon to all bookmark folder names. The icon brings no value to my workflow and takes up twice the space I could use for more awesome folders.

Recommendation: Replace the folder icons with a styling similar to the background change invoked when rolling over a bookmark folder on the bookmark menu bar today. When the mouse rolls over a folder, the background of the folder name darkens. If that style were presented at all times it would delineate individual folders–the same purpose the bulky folder icons serve today. It would make the text function more like a button. The exact style of this new design does not need to match the rollover style. Text titles would appear to be wider buttons. Emoji titles would be more narrow. Strongly recommend forcing a minimum button width regardless of the folder title width.

What does this accomplish?

It would be awesome if Brave were to support hiding the folder icon in folder names.

Here is a wireframe idea for the UI. 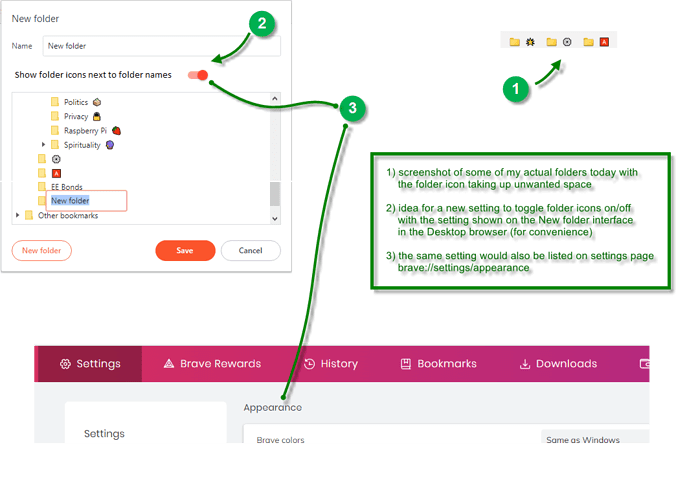 There would perhaps be a need for a visual cue to distinguish folders from bookmarks while folder icons are hidden. Perhaps shading, for example:

In this example there are three folders on the left followed by three bookmarks on the right.

Actually now that I have wireframed the idea, I would simply omit the setting and the old folder icons altogether and go with a consistent folder visual cue versus bookmark, like so:

The difference here is my quick attempt to make the shading under folder names appear to have a paper folder tab look to them, which is best seen in the “Video” folder name.

My spacing in the bookmark examples is perhaps tighter than it should be in reality. Hopefully you get the idea, which is to basically get rid of the folder icon as the visual cue for a folder and replace it with a shading/background visual cue.

Here’s one last example illustration of the idea with much more spacing between folder and bookmark names.

Thanks for considering this idea!