Description of the issue: Ads appearing in animepahe site.

Expected result: Ad in the middle of the screen. Not able to change episode or click download and have to reload the page again yo get rid of the ad.

Thank you for reaching us and sorry to hear you’re having trouble with blocking ads. Our best recommendation is to use this link you can block ads using aggressive mode.

Additionally if you are still seeing ads you can enable these filters Fanboy Annoyances List and uBlock Annoyances List to block most ads and trackers on the web. To select them click on this link: brave://settings/shields/filters then on filters list, search and check on the boxes corresponding to the ones mentioned previously.

Let me know if that works and have a nice day!

Then also going to point out to @fanboynz that I just tested on my Windows 11 Pro, both in Release and Nightly versions. Nightly was default settings initially, Release running in Strict blocking with Fanboy Annoyance and uBlock Annoyances.

In both scenarios, things mostly work right except it has that annoying thing appear that shows Skip Ad. Though fortunately, no ads appear.

Have a screenshot for you of that happening. Also did the Inspect Element part for screenshot, if that helps you. 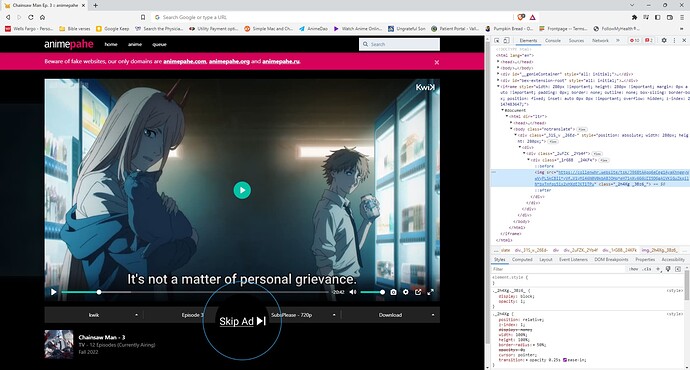 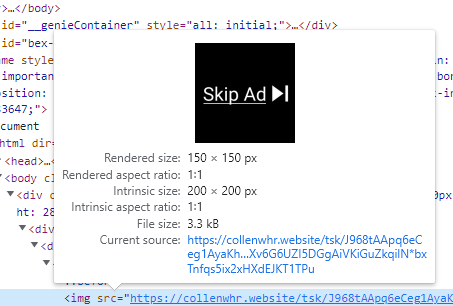 Thanks for changing the category. I did not know about that.

Thanks for the reply! But your solution only applies for the PC version. I am using it in my mobile the android version, so there is no filter in shields settings available in android app of Brave. Let me know if there is any other way to block this ad.

Hey, thanks for the reply. Never knew these existed until now for android. But even after toggling them on, I still see the ad.

Can tell the user the custom filter (one line) to be added in brave://adblock.
I cannot do it.

I actually wrote a response to this thread but I couldn’t reproduce it so I deleted it.

I never got that overlay button and the problem is in Android it is harder to troubleshoot this because you can’t just ask “what items are being blocked by shields” there is no info about it.
I saw the screenshots from Saoiray, but it doesn’t explain how that iframe came to life, I only got that when I disabled almost Easylist and uBlock filters from uBlock.
So unless it is a bug I don’t know.
To block cosmetics inside an iframe you need to enable a flag, it’s being optimized by Brave in Nightly, but it has always worked okay for me, pretty nice flag to enable.
And that would be another thing to test, like a cosmetic in that iframe to get rid of a button, but since I never got it, I can’t be sure if anything I say would break the website.

In my tests I only found one difference between uBlock and Brave, and that’s because of an unsupported feature or two.
But it didn’t make a difference because even without it, Brave will block something else and stop it there.

The thing is we don’t even know if the OP is still getting the issue. You know me, I will get technical about this.

But even Brave not blocking/redirecting that element, it will go ahead and block another element https://syenitetatler.tech/cuid/?f=https%3A%2F%2Fanimepahe.com and then the problem stops there, I saw I could get some popups without this and the other one done by the regex, but it seemed to work fine.

The problem is I never got the overlay so I don’t think this has anything to do with it.

all I can give is this rule to mimic what is being done in uBlock, I actually use the regex, and removed the unsupported lookahead, and it has been working okay, since it will block more stuff in different websites automatically , but I don’t want to break anyone’s anything so I will just givethe one for animepahe and anyone has to test it.
It will work in stable which doesn’t support redirect-rule and all:

I never got that overlay button and the problem is in Android it is harder to troubleshoot this because you can’t just ask “what items are being blocked by shields” there is no info about it.

It might be possible by running UBO on kiwi browser or UBO on firefox.

but since I never got it, I can’t be sure if anything I say would break the website.

If you (we) are not able to replicate then it might have solved by some other guys on different forum like github easylist or easylist forum.

Thanks for the reply but, I do not understand the technical aspects and so as you said I am using mozilla firefox with ublock right now, and it works good on animepahe site and also been switching to less ads and easily blockable ads showing site for watching.

What did you study or learn to understand and dismantle this problem so technically. If possible can I be able to understand what you guys are talking about ?

Thanks for the reply, appreciate it a lot!