There has been so solution to this. I really want to know why this is happening. its been like this for at least a year for me across multiple computer restarts.

here are the extensions I have installed: 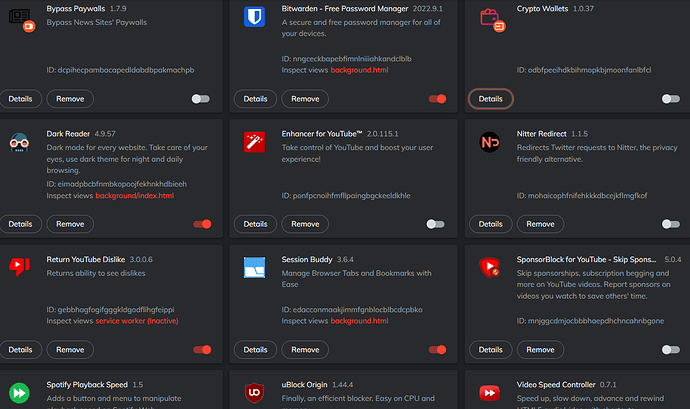 Every extension will add more to CPU/RAM requirements. Try disabling all extensions, then work you way from there.

Ive only had this issue in brave. chrome with the same extensions does not have this problem for me

@bean3
modify Brave shortcut(s) and add --disable-brave-extension so it doesn’t load.
I usually use cmd to do this, as long as you open where brave.exe is with that switch, you will avoid this problem.
I ended up adding Brave to PATH variable and then create a variable called flags with the switches I want to run like --disable-brave-extension, and then all I need to do is to type brave %flags% and done.

What is Extension:Brave?
Extension:brave is Brave’s element picker, it used to be part of Brave shields Panel and Shields button, but Brave released Panel v2 and the extension only controls the cosmetics element picker.

It is a good question to ask why this leak happens. have you tried in a completely new profile or something? disabling all extensions?

Element Picker doesn’t really run, it only runs when you enable it then, it creates and iframe with src=“chrome-extension://mnojpmjdmbbfmejpflffifhffcmidifd/elementPicker.html”
on top of the window, you select the element, save and once it is closed, it should be gone.

So if you don’t care about the element picker, never use it, or you do it like me, use the devtools which will be a better way to create cosmetics (it’s not just Brave, not even uBlock is good, I only use it to test some cosmetic filters but not to create them) Then it would be good to disable it especially if you get this weird memory leak.

@fanboynz he is talking about the Extension:Brave the one in charge of element picker since Shield Panels v2 was released, I already saw someone on Linux with the same behavior, using +1GB ram, but it seems so rare, I guess it is not something easy to troubleshoot/monitor to see when it happens exactly for the people.

Maybe someday there will be a button or flag to disable it, if people aren’t going to use the element picker and it causes memory leaks or waste of memory like when I used to use 60 Brave profiles and I saved like 1.5GB of memory just by disabling it and people might not even be using it , well, maybe would be something to consider and suggest. Since it doesn’t controls Brave’s Shield Panel anymore, the usability of the extension is almost gone for most people.