Hey, what's going on here, what does this error mean and why is it coming up now? 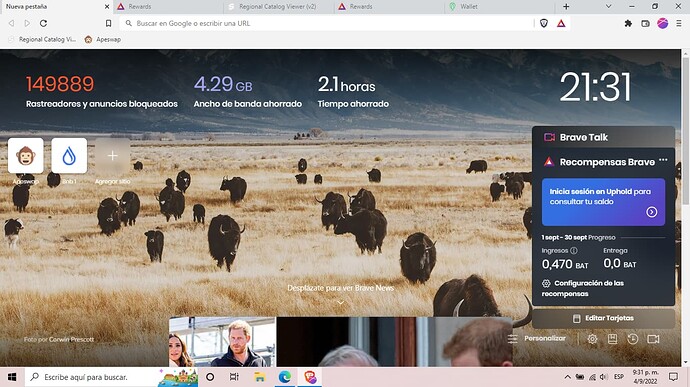 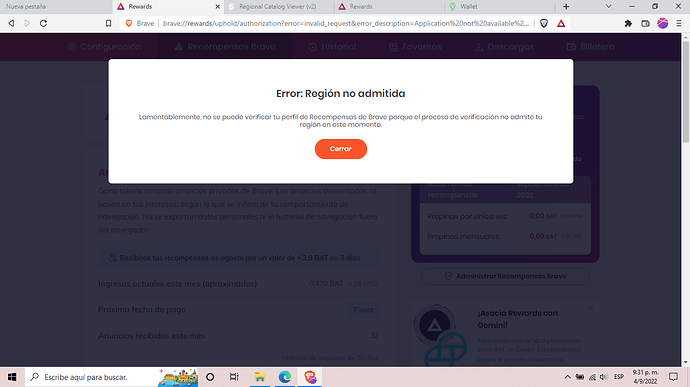 I have been using Brave for 2 months now, until yesterday no strange sign came up. can anyone explain or reverse that status? I confess to you that if it becomes what I think it is, you will lose users.

@MdqSilva There’s been a bunch of announcements and thousands of posts about it. Might help to search through. In any case, I’ll start you off with these:

Last updated: August 25th, 2022 Support for verifying your Brave Rewards profile may vary by region and custodian. Currently, Brave Rewards can be verified with the following three custodial accoun...

Okay, so changing how I update this. You’ll see newest information up top and then older information “hidden” where you have to click to reveal. Do me and yourself a favor, click to see the older bits of information if you didn’t see it. There’s still some fairly important info there for everyone. I just wanted to simplify this a bit. UPDATE 08/31/2022 Unfortunately have to announce that Brave has paused the ability to verify with Uphold for anyone in Columbia. No idea why quite yet. But I do …

Please do not forget Argentina!!!

And those of us who want to withdraw from Argentina, what do we do?

those of us who want to withdraw from Argentina

You can’t. You still earn BAT and claim it in your browser, but that’s the whole thing about support no longer being offered. You can’t link to Uphold or Gemini, which means no way to move it out of the Brave browser.

I mean, might be able to tip yourself or a friend, though that always carries a risk of getting the Creators account suspended. Otherwise just stuck waiting for Brave to support the region again in terms of linking to a custodial partner that will let you withdraw BAT to them.

And how long until all that happens is anyone’s guess. They’ve been having some pretty significant delays. What was supposed to be a “few days” to add Brazil once again has been 2 weeks now.

Then in that timeframe, they even removed Colombia now. It’s been said their goal is to have everything working by the end of the year, so I guess I’m telling most people assume it’s going to be 3-4 months and be happy if it happens to come any sooner. Even that 3-4 months isn’t a guarantee though, as I know some countries will be gone for much longer…maybe even forever. Those countries gone longer or forever is because they had too much fraud and issues. But we’ll cross that bridge when we get there.

I hope it’s soon, because I think they just made a big mistake.

What does Brazil have to do with Argentina?

It is too long what you tell me.

What does Brazil have to do with Argentina?

I used it as an example of how they quoted a timeframe, that time passed, and they still have failed to do as was said. Then I talked about how they said goal was to add regions, including Argentina, by the end of this year.

This means I’m telling you that if they keep failing to meet goals, then it might be much longer. It’s my way of saying we hope they get it sooner, but be prepared for chances it will be later. Too many people hear a date and then expect it then…getting mad if it doesn’t come to fulfillment. Because of that, I try to be more realistic and perhaps pessimistic, as it’s better to think negative and have good appear, rather than to think positive and be disappointed.

Let’s talk straight. Last month I won certain BATs, how far do you follow me? Ok, now you tell me that I can’t withdraw by uphold. So far I understood everything, but wouldn’t there be an auxiliary way to withdraw it?

wouldn’t there be an auxiliary way to withdraw it?

Nope. It’s because they only have contracts with two companies. In order for you to be able to move BAT out of the browser and to your bank account, you have to go through KYC/AML and you need a company with a Money Transmitters License, among other things, to handle the process.

Brave doesn’t want the licenses or to KYC all Users, so they have places like Uphold and Gemini that do it. When a person is unable to use either of those, that means there’s no longer a legal way for the person to be able to access their BAT except to be able to tip Creators or just to hold it in their browser for a future date.

Question: These BATs that are not withdrawn from the previous month (or months) in which wallet will they be deposited or will they just continue to accumulate (if still used)? Because they will remain somewhere, won’t they?

Many of the regions (such as Colombia, Philippines, and Vietnam) were removed because of the amount of fraud that was going on. Not only was it costing them lots of money, but it also was starting to cause problems with governments and custodial partners.

Add to that how Brave has been working on improving their systems, preparing for changes to Rewards that’s going to be happening early next year, and how there were some issues and pushback from governments in how things were going…it’s one big headache.

What Brave has been working on while limiting regions is to make sure that everything is running smoothly, they have improved their fraud detection, are complying with government regulations, and a lot more.

These BATs that are not withdrawn from the previous month (or months) in which wallet will they be deposited or will they just continue to accumulate (if still used)?

Any BAT that already was paid to Uphold or Gemini will remain there. You can do anything you want with those. As long as Brave remained connected to it, you’d receive all your payments there. Once the devices lose their connection, which generally happens about every 90 days, then you’d be unable to connect. From that point on, all BAT gets paid and delivered to your browser.

Because they will remain somewhere, won’t they?

Yes, they remain in your Brave browser, which will be stored on your device. The scary thing with that is if you do a system restore, lose your device, or erase Brave it will mean you lose all of the BAT you had stored on it. So it’s recommended that for now, you do normal backups of your \brave-browser folder, so you don’t lose that BAT.

I mentioned changes for the future. They announced they will be making Rewards part of Brave Wallet. However, you still will have to KYC/AML with a custodial partner to withdraw BAT.

The good side of this change though is that it will be saved in Brave Wallet and you can use the seed phrase to link/sync your Rewards from multiple devices to the same Wallet. There’s going to be more details they give once it gets closer. They are working on it now with hopes of finishing this year and releasing it in the first quarter of next year. 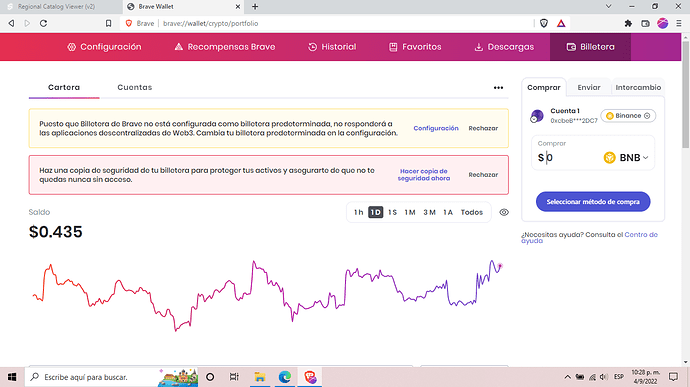 I thought they would get the hint. Tell me what this is for?

I see you did not reply to my last message.

I see you did not reply to my last message.

That’s correct. As a human, I needed sleep. Then I spent the day treating my mom to lunch and bought her a new phone, as her birthday is coming up. While I do spend more time here than I should, I do have a life outside of Brave Community and won’t always respond to things immediately.

That said, I’m honestly not sure what I’m seeing there. I may see if I can get Google Translate to do a translation from image. Either way, I usually only have been learning and dealing with basic troubleshooting and then things around Rewards. What you’re showing me there is Brave Wallet, which is not something I’d messed with often. So my knowledge and expertise is pretty much non-existent.

For Brave, usually would be @hub or @Evan123 who tends to respond and help with issues relating to Brave Wallet.

In terms of users, I think @Aman_M and @Chocoholic usually have more knowledge and experience with Wallet.

Either way, definitely helps if text is ever put into posts so can be easily translated.