Description of the issue:
Malwarebytes reports a possible trojan at c:\Program Files (86)\BraveSoftware\Brave-Browser\Aplication\brave.exe

Steps to Reproduce (add as many as necessary): 1. 2. 3.
Reported by Malwarebytes, so, have Malwarebytes installed, I suppose

Seems a legit request. (having an example website would help next time)

changed 1 files with 1 additions and 0 deletions.

Hi, @harryadney. So, you apparently don’t mean that Malwarebytes is reporting Brave is a potential Trojan, but that while using Brave Malwarebytes blocks you from going to forwrdnow.com because IT may contain a Trojan. I say this because MWB scanned my machine this morning and didn’t say anything about Brave, and I tried to go to forwrdnow.com and got this: 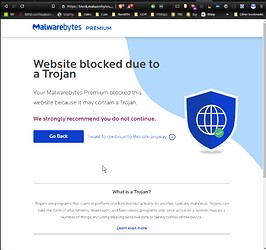 Edit: I’m sorry, I think I misinterpreted the intended outcome of the OP and which list @fanboynz added the site to. @harryadney, were you trying to get the site added to the blocklist as opposed to the whitelist? And fanboynz, was your request to add the site to the blocklist?
[[end of edit]]

If that is what you got or very like it, this has little to do with Brave and would occur with any browser you used since it’s MWB that’s doing the blocking. As a result, @fanboynz might consider retracting the request to update the list, unless MWB’s determination of the site’s risk is in error.

@harryadney,
Can you clarify what @hnktong is saying in his reply? Your report seems misleading.

Description of the issue:
Malwarebytes reports a possible trojan at c:\Program Files (86)\BraveSoftware\Brave-Browser\Aplication\brave.exe

This statement here implies that you have MWB installed on your machine and, when scanned, it flagged file(s) found at c:\Program Files (86)\BraveSoftware\Brave-Browser\Aplication\brave.exe – note that other users have mentioned this as well and that it is a false positive.

However, your topic title implies that there’s some connection between MWB, the site requested (forwrdnow.com) and Brave. However, given this information, Brave actually has nothing to do with this warning your’e seeing here.

Would you mind elaborating on your exact issue is?