Oh, my bad. Missed that.

If anyone has played around it, can anser my questions just for curiosity.

Just so you know @chh_68 , I passed this question on to Sampson over on Twitter. He responded with the answer below:

Translation is done server-side for both Brave and Vivaldi; neither uses a third-party endpoint. Both use Lingvanex, though Brave has a 2x lighter payload which also preserves line-breaks in the content (translate http://sampson.codes/brave/tests/translate/… in both browsers for a quick demo).

@Saoiray and @chh_68: I can confirm that Brave translates the mentioned URL and does not break the line breaks, whereas Vivaldi has the translated text in a single line.

I have never encountered this behavior after using Lingvanex on Vivaldi hundreds (if not thousands) of times. The line breaks are lost because he dumps the content as raw text and did not use correct HTML formatting.

I do not understand the relationship between Lingvanex and Transifex. Why both? What is the purpose? If Brave is using Lingvanex why could I only find a couple of issue reports at Brave GitHub referencing Transifex. An explanation would be helpful because I am confused about the Lingvanex vs Transifex references being made.

Also, I do not see Lingavanex functionality (features) as documented at https://lingvanex.com/user-manual-windows/. Is a full Lingvanex implementation planned for a later date? Or is the functionality already present natively and I just don’t know how to activate it?

Many of the Lingvanex features would be nice to have like the abilty to translate mixed text pages natively. Right now, for example, if I open a topic in Brave Community that has a post in a non-English language, I do not get a translation button (should I?) Also the image translate and voice recognition features are nice. Will this be a premium service offered to Brave Browser users? I would be interested especially if native vs 3rd party app download and doubly if I could purchase the service with vBAT/BAT.

Other Feedback:
Translate in Release version does not work unless the flag(s) are enabled at brave://flags. If the flags are not enabled, I get the prompt to install Google translate when enable Offer to translate pages that aren't in a language you read at brave://settings/languages The feature does work in Beta just by enabling the option at language settings which is weird since Beta is still at 1.43.79 and Release at 1.43.89.

I really like this feature even without all the bells and whistles. Very nice to go to a page and just press a button to get a page translated without having to install an extension or copy/paste the text to a translator. Thank-you to the Brave team for implementing this feature! Well done.

I do not understand the relationship between Lingvanex and Transifex. Why both?

I might have seen wrong somewhere. I’ll trust what @talgeeze said for the moment. I mean, I ended up with the link I did somehow when I was looking through Github and other things for updates on Brave Translate, but I couldn’t tell you how I ended up with it right now.

The Transifex link is about Brave UI localization, not Brave Translate supported languages.

Also, I do not see Lingavanex functionality (features) as documented at https://lingvanex.com/user-manual-windows/. Is a full Lingvanex implementation planned for a later date? Or is the functionality already present natively and I just don’t know how to activate it?

Not quite sure how that works. Feel free to hop on Twitter and try to ask for more info. Otherwise I’ll be digging for it on Tuesday I think. Just so you can see his Twitter response with the info I said earlier: 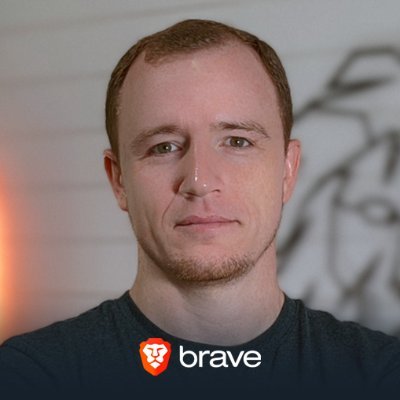 @BraveSampson
@Saoiray Translation is done server-side for both Brave and Vivaldi; neither uses a third-party endpoint. Both use Lingvanex, though Brave has a 2x lighter payload which also preserves line-breaks in the content (translate sampson.codes/brave/tests/tr… in both browsers for a quick demo).
Latest version added Brave translate
Chocoholic September 4, 2022, 1:07am #33

I do not do twitter, or social media in general. I will hop over to read posts on a social media site if it is something I can read without logging in but otherwise, not gonna happen. If you do post a question per this, just recap or provide link to response please.

Also, not sure what reference to Tuesday meant? Is that when the community call takes place? Edit: and nm, went back and reread information and indeed call takes place on Tuesday, so that is probably what you are referencing. lol

I do not understand the relationship between Lingvanex and Transifex.

Lingvanex is a translation engine Brave uses for their website translation feature.
Transifex is a localization management platform mainly used for localizing user interface. It’s like Github, but for translating stuff instead of coding stuff.

Also, I do not see Lingavanex functionality (features) as documented at https://lingvanex.com/user-manual-windows/.

They offer many features, but availability will vary depending on third-party implementation (aka how much money Brave is willing to spend on the service).

Right now, for example, if I open a topic in Brave Community that has a post in a non-English language, I do not get a translation button (should I?)

Found info at Brave GitHub. I stay in the brave-browser repository so much, I forget sometimes to look for issues in other repositories. Such was the case in this instance. Really no meaningful information from an end-user standpoint, but integration issue report for Lingvanex is there.

Funny thing, when I went back to brave-browser and searched issues, I did pull up a closed issue with a link to the go-translate repository this time. No idea. Maybe I just overlooked…? Maybe it’s magic? Who knows. 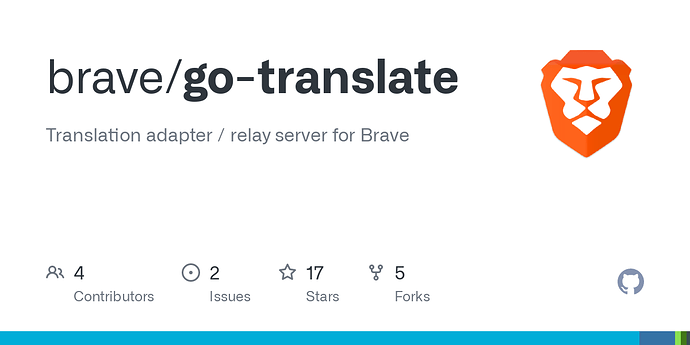 Translation adapter / relay server for Brave. Contribute to brave/go-translate development by creating an account on GitHub.

@talgeeze Thank-you for the information! Makes much more sense to me now. Also nice to know I am not missing any available features.

It was announced in the release notes for version 1.43.88,

Yes, I know it was mentioned in the release notes, what I meant was proper blog post going into detail on how it works exactly, just like vivaldi and firefox explained their new translate feature.

Release notes told us about the translate feature is in this release, but it never told us how it works. The twitter post only mentioned Lingvanex from which I got to personally know that it is working same as Vivaldi.

This partial translation is a cool feature. Like Chocoholic said about just translating alien posts on a page. Hope Brave implements that. Not sure if even Google Translate could do that.

Also, I think a Topic could be created where users can post burning questions to be asked in the Community Call. Could be fun.

I’ve used many solutions out there so they have all pros and cons:

What to do about this issue?

I think the idea is more than great. There are indeed many extensions for translation, and Google Translate is not the best, although it is the most popular.

In addition to automatic translation, A Brave Translator would also be able to translate typed words, documents, and subtitles, and the translator’s target language would be set independently of the browser language.

I think it would be best to create Brave Translator with the help of companies like Smart Link Corporation (ImTranslator), Lingvanex, Gikken (Mate Translate), and Free Translations; but not with just one of them, but with all of them together. The Vivaldi Browser with the help of Lingvanex created its own translator which is not excellent, but is very good.

Then we can think how much better the “meta-translation” (meta - like meta-search) will be by cooperating with multiple companies, using the crowdsourcing method! Later, as the translator is further developed, the services of such companies, like Amazon and IBM Watson may also be used.

It should also be said that the translator is open source, so that advanced users can further improve it and correct the errors that machine translators make.

The brave translate already exists and has been added recently, and the additional features you have specified will hopefully be added in some near or distant future. The companies you mention are a great choice because they offer much more than just translation.

I would, for my part, ask the authors of brave to add the option of automatic detection of the source language and add some more variants of those already available, such as Serbian (Latin), Bosnian (Cyrillic), Mongolian (Traditional), etc.

Best regards and best thanks

I know that it already exists and therefore it needs to be further improved, which The Brave will certainly do. So, apart from the translation itself, some more advanced tools that will make Brave Translate even better can be OCR, Speech to text and audio & video transcription.

This multiple translator can help both us who do not want to add more browser extensions and install apps, and Brave to, as far as possible, make their services more accessible to all users around the world, including those who are poor in English (not only English, but English is a primary language in the computer technologies), and even professional translators who for various reasons are unable to pay professional translators, grammarians and proofreaders for your languages; however pretentious that may be on the topic.

Now this exists, but lacks feature to translate only selected text, not the entire page. Hope this will be added too.

Why it does not work on this forum itself?
I am not able to do translations on this brave forum.

For eg., there is a japanaese section on this forum and it does not get translated to English https://community.brave.com/c/japanese-support/148, even Spanish-to-English Transation. Nothing works.

Quite odd if it does not work on Discourse Forums.

I’m glad that BA is using Lingvanex’s services, but these other firms mentioned by someone also offer a lot of interesting and useful things.