Several of the biggies missing. Presumably more to come?

Yeah, copy/paste of something I wrote last week:

They are working on expanding languages. Right now, only have 15.

You can see status of languages at https://explore.transifex.com/brave/brave/ and there’s a Join This Project button for people to help. I didn’t go through to see what their requirements are, but I do see they are way behind in in a lot of languages, such as only 18% Gujarati.

I notice from the Transifex link that English (United Kingdom) only 99%.
Jolly good show.

I also notice Italian is 100% but Italian (Italy) only 99%.
That is to distinguish it from Italian (New York), right?

Helpful, to be sure.

However, I like that Vivaldi lets you copy text into their side panel in the translator app and just translate specific sentences or paragraphs. It’s been very useful in my language studies.

In the meantime, I’m using DuckDuckGo’s tool and Google Translate for my Duolingo exercises.

In the meantime, I’m using DuckDuckGo’s tool and Google Translate for my Duolingo exercises.

I’ve been using DeepL. It’s been the most accurate and useful. Their browser extension is pretty good but then their app/program itself gives more customization. For example, you can edit the glossary. English to Spanish had been doing BAT as MTD but after i changed glossary It’s keeping BAT as BAT.

Either one works as you’re saying. But compared to using Google Translate, people have told me DeepL is closer to legit language where Google Translate is easy to tell it is machine translation. (Oh, and premium version of DeepL has ability to toggle between casual and polite speech)

Good to know, @Saoiray, thank you! I’ll definitely check this out.

I’ll definitely check this out.

Let me know what you think, when you do. Just one thing I should mention, the negative of it is it doesn’t do whole page translation. Only translates what text you highlight and all. So if ever needing full page translation, no choice but to use Brave Translate or Google Translate pretty much.

That’s exactly what I’m looking for right now. I use tools like this when I’m doing advanced challenges or tests on Duolingo or when I was taking a Latin class a year ago.

The product has to do two things. Not just translate when given a language, but also identify a language.

I’ve noticed the Google product sometimes slips up with some of the Slavic languages, especially when the text is not quite modern in form.

Many thanks for the translator, especially in the android version. The quality of the translation is a little worse than that of Google, I would like to know what engine you have. I also want to know if in the future the choice of search engine will be made like Firefox, that is, you type a query and select a search engine? Very comfortably

It works well for Spanish. I still have to use other resources for Latin, but it’s not like it’s a popular spoken language. Appreciate your suggestion!

The Transifex link is about Brave UI localization, not Brave Translate supported languages.

The Transifex link is about Brave UI localization,

Had come across it somewhere when I was looking into it, but in quick searches not seeing it related to translate. So might have gotten that wrong. I may look deeper again but am pretty sure had seen it connected via Github somewhere as I was looking into translation. However, we can’t be right 100% of the time.

Thanks for pointing it out anyway. I’ll have to see if they are related, if I got that wrong, or where that stands.

For some weird reason my comment ended up in the wrong thread:

Lingvanex is a translation engine Brave uses for their website translation feature. Transifex is a localization management platform mainly used for localizing user interface. It’s like Github, but for translating stuff instead of coding stuff. They offer many features, but availability will vary depending on third-party implementation (aka how much money Brave is willing to spend on the service). Only full page translation is currently supported. I have not seen anything about supporting p…

Likely because i tagged you over there and the two conversations are similar.

I might have seen wrong somewhere. I’ll trust what @talgeeze said for the moment. I mean, I ended up with the link I did somehow when I was looking through Github and other things for updates on Brave Translate, but I couldn’t tell you how I ended up with it right now. Not quite sure how that works. Feel free to hop on Twitter and try to ask for more info. Otherwise I’ll be digging for it on Tuesday I think. Just so you can see his Twitter response with the info I said earlier:

Hello,
I’ve been waiting for this function for a long time, I followed your recommendations to the letter, but I still don’t see the tool appear to the right of the url.
A little help please?

@Julian658 If the button doesn’t appear, have you tried right clicking on the page and selecting the Translate to <language> option from the menu? Is that even available when you right click? 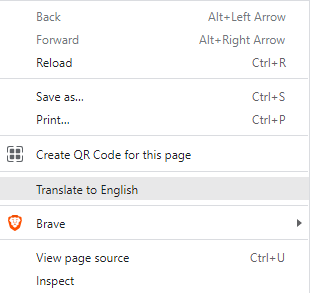 Also, you may want to try toggling Use Brave translate off/on at brave://settings/languages to see if any behavior changes.

If none of that works, you should probably create your own topic and provide the information requested in the template so community members and Brave support can help you troubleshoot.

@Julian658 Article recently added to Brave Help Center which may provide additional information to help troubleshoot. I’m on win10 and it is working for me. I will specifically try a French language site and post an update here or in your topic if one is created.

How do I use Brave Translate?

Brave browser now offers it's own built-in translation feature for use in the Desktop and Android browser (iOSto be supported in future builds). Brave has partnered with Lingvanex to bring quick, q...

Edit: Well, working for me on French language websites. Icon pops up immediately in address bar and when I click and select English, page is translated from French to English.